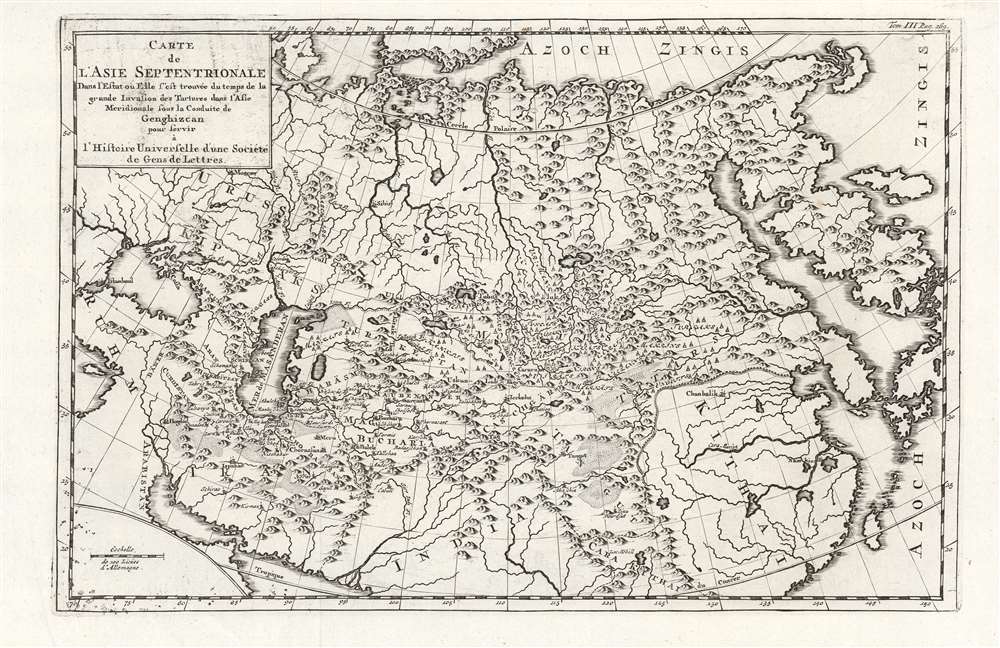 This 18th century map of Asia shows the Tatar Empire during the rule of Genghis Khan. Its 1726 engraver is not known, despite the map having been used in several works (in this case, a general history printed in 1761.) The map has its genesis in the work of Philipp Johann von Strahlenberg: it is an example that mapmaker's first map of Russia and Siberia, stolen from him in 1715. Strahlenberg (1677 - 1747) would rebound to produce his superb 1730 Tattariae Magnae, one of the largest, most groundbreaking, and unique maps of Russia to appear in the first half of the 18th century, but this engraving - in its earliest printing - was one of the first printed iterations of Strahlenberg's seminal mapping of Siberia and the Russian Arctic. It is one of the only maps of the empire of Genghis Khan based on report from a Tatar source: Abu al-Ghazi Bahadur's (1603 - 1663) Genealogical History of the Turkmens, a seventeenth-century manuscript which Strahlenberg acquired and translated. Set within a framework of Strahlenberg's map of Asia in Russia, the map's details focus on the historical domains of the Mongol Empire as derived from his translation of Bahadur's work.

This map originates with the Great Northern War (1700 - 1721). Strahlenberg, a Swedish officer, was taken by Russian forces following the Battle of Poltava in 1709. He was sent to Tobolsk, Siberia, along with other Swedish prisoners-of-war. As a noble prisoner, Strahlenberg initially dedicated himself to the study of languages, an activity well documented in his book Das Nord- und Ostliche Theil von Europa und Asia, which includes tables on several Siberian languages including Mongolian. It was during his enforced tenure in Tobolsk that Strahlenberg acquired the manuscript of Abu al-Ghazi Bahadur's 1659 Genealogy of the Turkmens which he translated, probably to French. Strahlenberg's map may have begun as a simple sketch intended to supplement his linguistic work, but in time developing the map grew to become his primary obsession.

By 1715, Strahlenberg had completed a map of Siberia, as well as his translations of al-Ghazi. A fire broke out in Tobolsk, and Strahlenberg hastily gathered his treasures into a trunk and threw them out the window to save them from the fire.

No sooner had it hit the ground than the trunk was promptly stolen.

Strahlenberg heroically bent himself to create a new map, but in and around 1717 the Russian Prince Matvey Petrovich Gagarin - governor of Tobolsk - confiscated the map and mapmaking tools, and forbade Strahlenberg from making maps under pain of being sent even further north. (The Prince may possibly have been motivated in hiding his hobby of raiding grave mounds for gold and silver.) Undaunted, Strahlenberg had preserved a spare copy of his notes and was able to recreate the map, which he forwarded to the Swedish ambassador in Moscow, Josias Cederhielm (1673 - 1729). This was transmitted, at least in part, to Homann who used it for his 1725 map of Kamchatka. This gives us our sole glimpse of Strahlenberg's 1718 work.

Losing the Race with an Anonymous Plagiarist

The Great Northern War between Russia and Sweden ended in 1721, and news of the peace reached Siberia in 1722. Strahlenberg began his long voyage back to Sweden in May of that year, arriving in Stockholm in August of 1723. He began in earnest to find a publisher for his map, but was unable to fund the printing until 1730. In the meantime, Leiden publisher Kallewier in 1726 printed the first, French edition of Abu al-Ghazi Bahadur's Histoire genéalogique des Tatars The Histoire contained two small-format maps: Carte Nouvelle de l'Asie Septentrionale and Carte de l'Asie Septentrionale. (the first printing of the present map)

The map was first printed by Leiden publisher Kallewier in 1726 in the first, French edition of Abu al-Ghazi Bahadur's Histoire genéalogique des Tatars by an anonymous engraver; thereafter the plate was reused in at least two editions of Arksteé and Merkus' Histoire Universelle. This example appeared in the 1761 edition of that work. No examples of the separate map are cataloged in OCLC, although both the Kalliewer and the Arksteé and Merkus' are well represented in institutional collections.

Philipp Johann von Strahlenberg (October 6, 1677 - September 7, 1747), aka Philip Johan Tabbert, was a Swedish army officer of Germanic descent. Strahlenberg was born in the Hanseatic town Stralsund, now Pomerania, Germany, but then part of Sweden. Strahlenberg joined the Swedish army in 1694, being promoted to Captain in 1703. When he was ennobled in 1707, he took the name Strahlenberg. During the Great Northern War (1700 - 1721) between Russia and Sweden, Strahlenberg was captured and sent to Tobolsk, where he lived the commodious life of a noble prisoner of war from 1711 to 1721. During this time, he developed a fascination with the the geography of Siberia and studied the anthropology, languages, and customs of its indigenous peoples. He also worked as an assistant to the German explorer and naturalist Daniel Gottlieb Messerschmidt (1685-1735), who was then working for Peter the Great. Along with fellow Swedish prisoner, Johan Anton von Matérn, Strahlenberg dedicated himself to the composition of a large new map of Russia. Strahlenberg recommended that the Ural Mountains serve as the eastern borders of the European continent, an idea that was later approved by the Tsar. He returned to Sweden in 1722, and in 1730 he published an important book about Siberia, Das Nord- und Ostliche Theil von Europa und Asia (North and Eastern Parts of Europe and Asia), and its accompanying map. Learn More...

Bagrow, Leo, A History of the Cartography of Russia up to 1800.
Looking for a high-resolution scan of this?