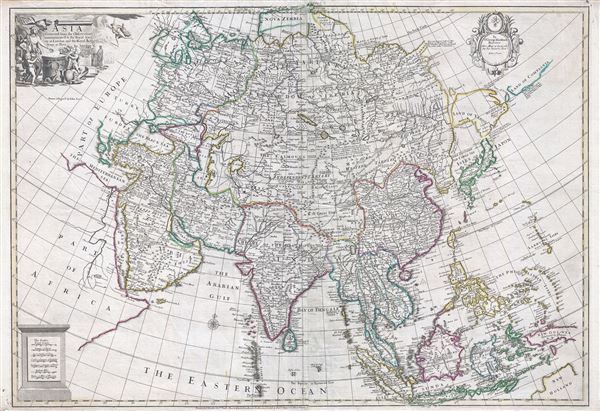 An extraordinary and rare elephant folio map of Asia naming boh the Sea of Korea and the Eastern Sea.

An exception c. 1725 elephant folio (large format) map of Asia by the English cartographer John Senex. This remarkable map covers the entirety of Asia from the Mediterranean to Japan and from Nova Zembla to Java and the Maldives. This map is enormously proportioned and offers much to study, from curious place names in the 'Kingdom of Great Tibet' such as 'Tache Linbou' (Tashi-lunpo), to a peninsular mapping of Nova Zembla, to a curious presentation of northeastern Asia, to a remarkably detailed map of the Philippine Islands.' This maps most intriguing features focus on the largely unexplored parts of Eastern Asia and we will only touch upon a few of these more interesting elements here.

It is not known where this chain of mountain ends or whether they are not joined to some other Continent.

This oddity appears on numerous maps dating from the late 17th and early 19th century. It is a legacy of Peter the Great's obsession over the search for a Northeast Passage. Around 1648 the Cossock Semen Ivanovich Dezhnyov (1605 - 1673) put together a rough and ready expedition to explore the region. His company consisted of Fedot Alekseyev traveling with the merchants Andreev and Afstaf'iev (representing the Guselnikov merchant house), who provided their own ship. Gerasim Ankudinov, an experienced sea captain with his own ship and some 30 men. Dezhnev, along with Mikhail Stadukhin recruit some 19 men of his own and procured a traditional kocha ship. Including escort vessels, a total seven ships sailed from the mouth the Kolyma River, along the Siberian Arctic, to the Anadyr River north of Kamchatka, and in doing so became the first Europeans to sail through the Bering Strait some 80 years before Vitus Bering. Dezhnyov described rounding a large mountainous promontory Chukchi, Tschuktschi, or Chukotka Peninsula. Of the seven vessels the multiple leaders, only three ships, and Dezhnev survived the passage. His expedition was mostly forgotten outside of limited cartographic circles until Gerhardt Friedrich Muller discovered Dezhnyov's reports and in 1758 published them. Dezhnyov ultimately proved that there was indeed a nautical route from Russia to Asia, but at the same time confirmed that it was exceedingly impractical for trade. Nonetheless his promontory was subsequently embraced by European cartographers who, lacking serious scientific data from the Dezhnyov expedition, surmised the form. The first of these was Dutchman Nicholaas Witsen, who prepared a map in 1687 based upon Dezhnyov's records that he discovered on a 1665 trip to Moscow. Many cartographers follows suit, though some, like Senex here, even went so far as to suggest that this landmass actually connected to America, and in doing so, both embraced and dismissed Dezhnyov.

Korea or Corea is present, if misshapen and squared off, in roughly the correct location. The sea between Japan and Korea, whose name, the 'Sea of Korea,' 'East Sea,' or the 'Sea of Japan,' is here identified in favor of Korea (The Eastern or Corea Sea). Historically, Korea has used the term 'East Sea' since 59 B.C., and many books published before the Japanese annexed Korea make references to the 'East Sea' or 'Sea of Korea.' Over time, neighboring and western countries have identified Korea's East Sea using various different terms. The St. Petersburg Academy of Sciences referred to the East Sea as 'Koreiskoe Mope' or 'Sea of Korea' in their 1745 map of Asia. Other seventeenth and 18th century Russian maps alternate between 'Sea of Korea' and 'Eastern Ocean.' The 18th century Russian and French explorers Adam Johan von Krusenstern and La Perouse called it the 'Sea of Japan,' a term that became popular worldwide. Nonetheless, the last official map published by the Russians name the East Sea the 'Sea of Korea.' The name is currently still a matter of historical and political dispute between the two countries.

At the northeastern most extreme of the map we can find a large landmass extending eastward towards North America labeled 'Land of Compagnia.' Senex further expounds that

. This is hopeful at best. What this map actually describes are lands discovered by Maerten de Vries and Cornelis Jansz Coen in 1643. The Vries-Coen expedition was launched in response to an obscure Spanish legend associated with the supposed c. 1590 voyage of Portuguese navigator Juan de Gama (Jao de Gama) which told of gold and silver rich islands somewhere to the east of Japan. These islands were said to be so saturated in precious metals that the tall, friendly, light skinned inhabitants even fashioned their homes out of gold. As improbable as it may seem, the idea inspired at least two expeditions to the region. Anthony Van Diemen, the director of the Dutch East India Company in the Indies, initiated an unsuccessful first expedition under Abel Jansz Tasman and Matthijs Hendricksz Quast in 1639, and a second more interesting expedition under Maerten de Vries and Cornelis Jansz Coen in 1643. It is this latter mission that most influenced the present map. The expedition followed the southeast coast of Hokkaido (here identified correctly as Yedso) in a northeasterly direction where it encountered the westermost Kuril Islands, Kunashir and Iturop, before sailing westward where the navigators correctly identified the fork-like peninsulas of southern Sakhalin, but not the strait that separated them from Hokkaido - here Senex wisely notes

It is not known if the country of Yedso be join'd to Japan or not.

From Sakhalin they again sailed south into more known waters. Vries and Coen were the first Europeans to enter these waters, which were in fact little known even to the Japanese. They made early contact with the indigenous Ainu people of Hokkaido, who they noted had silver-hilted daggers. (There is a curious note in Hokkaido (Yedso) which identifies the 'Anthony Pike Mines of Silver,' but we have not been able to identify a source for this curiosity.) They were the first to discover the Kuril Islands, here identified as 'Estates I.' (a variant on Staten Eyland) and 'Land of Compagnia (more commonly Gama). 'Estates I.' is in fact a reasonable approximation of Kunashir, the westernmost of the Kuril Island, while 'Compagnia' is, according to the convention of the period, a grossly overstated speculation on Iturop.

Senex maps the apocryphal Lake of Chiamay roughly in what is today Assam, India. Early cartographers postulated that such a lake must exist to source the four important Southeast Asian river systems: the Irrawaddy, the Dharla, the Chao Phraya, and the Brahmaputra. This lake began to appear in maps of Asia as early as the 16th century and persisted well into the mid-18th century. Its origins are unknown but may originate in a lost 16th century geography prepared by the Portuguese scholar Jao de Barros. It was also heavily discussed in the journals of Sven Hedin, who believed it to be associated with Indian legend that a sacred lake linked several of the holy subcontinent river systems. There are even records that the King of Siam led an invasionary force to take control of the lake in the 16th century. Nonetheless, the theory of Lake Chiamay was ultimately disproved and it disappeared from maps entirely by the 1760s.

Senex, John, Modern Geography; or, All the Known Countries in the World, (London) 1725.