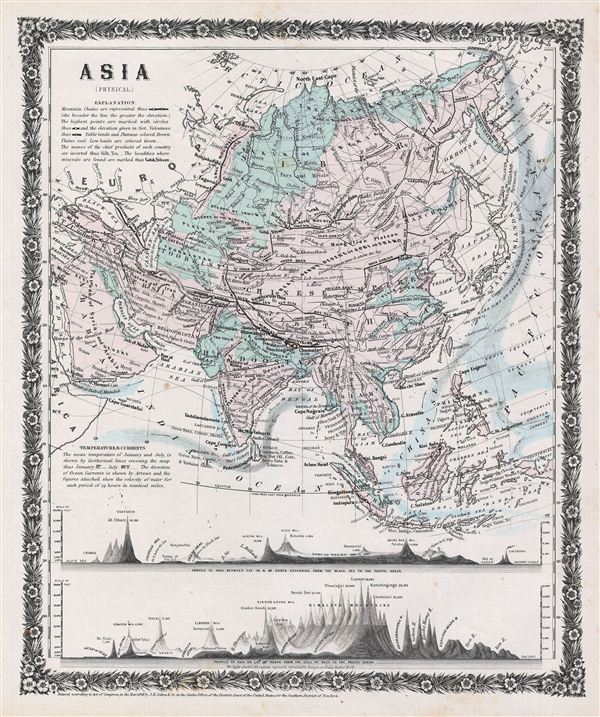 A rare example of Colton's 1858 physical map of Asia. Centered over the Gobi Desert, the map depicts the physical geography of Asia from Arctic Ocean to the Indian Ocean and from europe and Africa to the Pacific Ocean. Includes Siberia, Tibet, China, the Indian subcontinent, Persia, Turkey, Arabia, Turkistan, the Japan Islands, Southeast Asia and Maritime Southeast Asia. Although major cities are labeled, political distinctions are not. Color coded according to terrain, shows major cities, rivers, mountain chains, volcanoes, capes, oceans and ocean currents with mean temperatures marked. Chief products and minerals of each country are also marked. The bottom of the map contains two land elevations profiles, one of Asia from the Black Sea to the Pacific Ocean and the other of Asia from the Gulf of Suez to the Pacific Ocean. The top left and the bottom left corner of the map, above the land elevation profile, contains small paragraphs with information about the markings on the map. This beautiful hand colored map is a copper plate engraving, featuring a delicate floral style border only used by Colton in this particular atlas. Dated and copyrighted to J. H. Colton, 1859, this map is by G. Woolworth Colton and the text is by Richard Swainson Fisher. Published from Colton's 172 William Street Office in New York City an issued as part of the1859 edition of Colton's Illustrated Cabinet Atlas and Descriptive Geography.