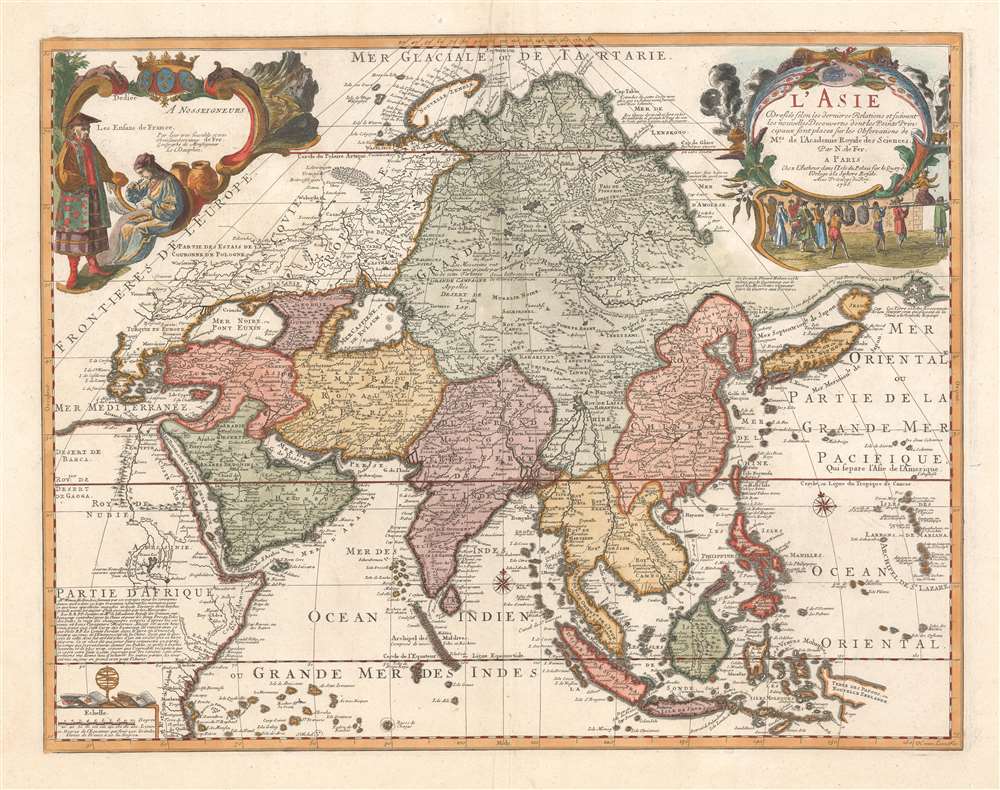 Uncommon map of Asia illustrating the geographical confusions of the early 18th century.

A scarce 1705 separate issue Nicolas De Fer map of Asia dedicated to the children of France. The map features two decorative cartouches engraved by N. Guerard. Coverage on an unusual conical projection extends from the Mediterranean to the Philippine Archipelago (Archipel de St. Lazare), and from Nova Zembla to Java. The map embraces many of the confusions and misconceptions regarding the geography of Asia prevalent during the late 17th and late 18th centuries, among them a mismapping of the Caspian Sea, the apocryphal lake of Chiamay, and confusion regarding the seas north of Japan and the Siberian Arctic.

Curious Mapping of the Siberian Arctic

The map is most striking for its unique illustration of northeastern Asia. While Hokkaido is correctly separated from the mainland, the coast west of Korea runs sharply east suggesting a connection to the mainland of North America. Predates widespread European knowledge of Sakhalin and Kamchatka. The Siberian Arctic coast reappears further north from the mouth of the River Amur, leaving considerable confusion regarding the cartographer's option regarding the northeast passage.

The mythical Lake of Chiamay appears at the western extreme of the map, roughly in what is today Assam, India. Early cartographers postulated that such a lake must exist to source the four important Southeast Asian river systems: the Irrawaddy, the Dharla, the Chao Phraya, and the Brahmaputra. This lake began to appear in maps of Asia as early as the 16th century and persisted well into the mid-18th century. Its origins are unknown but may originate in a lost 16th century geography prepared by the Portuguese scholar Jao de Barros. It was also heavily discussed in the journals of Sven Hedin, who believed it to be associated with Indian legend that a sacred lake, Mansarovar, linked several of the holy subcontinent river systems. There are even records that the King of Siam led an invasionary force to take control of the lake in the 16th century. Nonetheless, the theory of Lake Chiamay was ultimately disproved and it disappeared from maps entirely by the 1760s.

This map was engraved by Harmanus van Loon and first issued by Nicolas De Fer in 1700. The present example is the second edition, issued in 1705. Other than the date, there are no clear differences between these two early editions. The plates were subsequently acquired by Guillaume Danet and revised considerably, adding scales to the upper left cartouche, for republication in 1722. This map was separately issued, but incorporated into a number of De Fer composite atlases in the early 18th century.