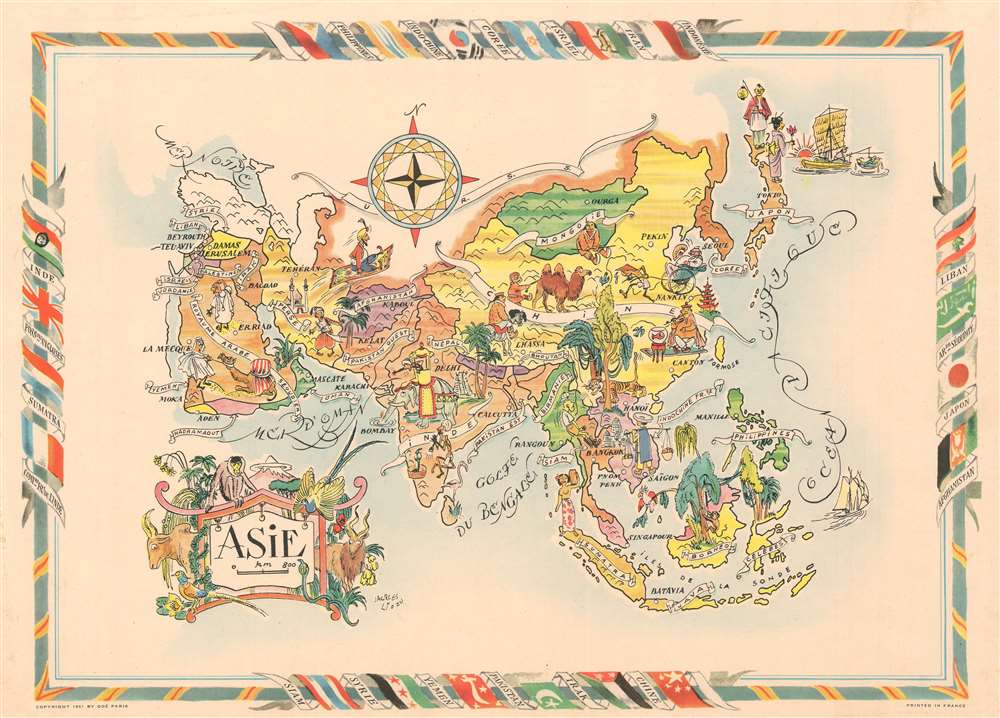 A fascinating pictorial map of the Middle East and Asia.
$250.00

This is a 1951 Jacques Liozu pictorial map of Paris. The map depicts the region from the Mediterranean Sea to the Pacific Ocean and from Mongolia to Indonesia. Charmingly illustrated, countries throughout are illustrated, labeled, and shaded different colors to allow for easy differentiation. French Indochina, which would only last for another few years, and East Pakistan, which became Bangladesh in 1971, are both labeled.Sstereotypical caricatures of the local inhabitants, many with overtly racist overtones, highlight cultural differences and European perspectives of the exotic Orient. An Indian is illustrated riding a brilliantly adorned elephant next to a snake charmer. Someone from Saudi Arabia is shown trying to move an obstinate camel, while another person in China is seen doing the exact same thing. A Persian is depicted riding on a flying carpet and a white tourist in Southeast Asia is scared out of their mind by a wild tiger. The whole is surrounded by a border that includes illustrations of the national flags of Asian countries.

This map was created by Jacques Liozu and published by Odé in 1951.

Jacques Liozu (1910 - 1974) was a French cartographer, painter, and illustrator active during the mid-20th century. Liozu is known for his wonderful pictorial maps of many different parts of the world.