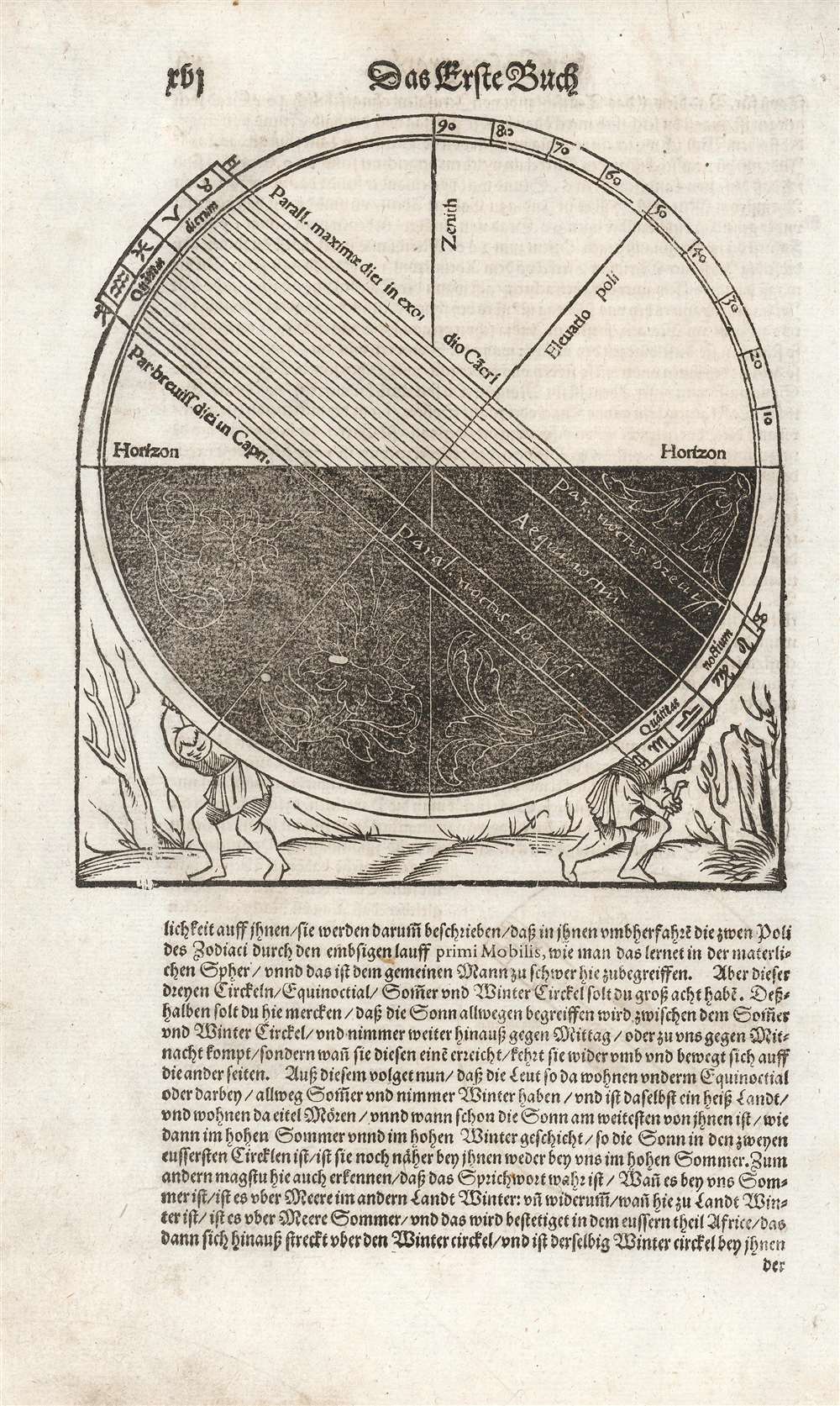 This elegant celestial chart is a woodcut illustration from Sebastian Münster's magnum opus, Cosmographia Universalis, entitled in its later editions Cosmographey. Beginning in 1544, this work would be the primary source of information for anyone who wished to know about not only the rest of the world, but the cosmos as it was understood. So, in addition to Münster's better-known maps and views, the first part of his Cosmographia included an array of astronomical charts. The present diagram is meant to explain the mechanism by which the seasons change in different parts of the world. It shows the axis of the Earth's poles in relation to the sun; illustrates the equator, the tropics of Cancer and Capricorn; and shows the apparent axial tilt of the rotation of the heavens around the Earth. (Münster sidesteps the question of whether it is the Earth that rotates, or the heavens around it, although his language in the accompanying text implies somewhat that it is the heavens that move. Copernicus' writings on heliocentrism were still quite new. Although Münster's world map, produced with Grynaeus and Hans Holbein the Younger, suggests that Münster was well aware of the idea of the rotation of the globe.)

Most of the astronomical diagrams appearing in Cosmographia were quite Spartan and small, embedded in the text. Münster lavishes a half page on this image, and the anonymous formschneider added an unusual amount of decoration. The diagram, reminiscent of an armillary sphere, is shown bearing down on the shoulders of two men struggling under the weight of it. The effect is to remind the reader that what is being shown is not a circle but indeed a three-dimensional sphere. These hapless assistants appear to be bearing their burden atop a grassy hill, framed with leafless trees. (Science is hard work.)

The Text: 'Of the circles called Parallels.'

Beginning on the verso, the text accompanying this diagram discusses the seasonal effects of the Earth's angle in relation to the Sun:

... in the first general map [the modern world map, appearing first among the foretext maps in the book] there are lines drawn crosswise over the meridians from west to east; you can perceive these also as circles if you join the figures in a circular fashion. These circles are called the parallels, because they are everywhere the same distance from each other and do not meet each other as do the meridians. There are three named parallels, which all the world knows. These are the Equinoctal circle... where day and night have the same length twice a year. The other is called the midsummer circle, or Cancer, because when the sun reaches it we have the longest day and the middle of summer. the third circle opposite midday is called the winter circle, or the circle of Capricorn. When the sun reaches this circle, we're in the middle of winter here and our shortest day. There are two more named circles, the Arctic and the Antarctic, that are hidden on the map - they circle the poles around which the zodiac roams upon the primi mobilis [the outermost concentric sphere conceived in medieval astronomy, carrying the spheres of the fixed stars and the planets in its daily revolution] How one learns this in the material sphere, is too difficult for the common man to grasp here. But you should pay attention to these three circles, Equinoctal, Summer and Winter. You should notice that the sun is always to be found between the summer and winter circles, and never goes further towards the south, or towards us to the north, but when it reaches one circle it turns back and moves towards the other. From this it follows that the people living under the equator always have summer and never winter, and it is a hot country, and Moors live there. When the sun is farthest from them, in high summer or deepest winter, the sun is still closer than it is to us in the height of summer. On the other hand, you may also recognize here that the proverb is true: That if it is summer here, it is winter over the sea in other countries: and again, when it is winter over here, it is summer over the sea, and this is confirmed in the outer part of Africa, which then stretches out over the winter circle...

This woodcut did not appear in the first few editions of Cosmographia, but was added in 1550 along with the many city views and illustrations which were introduced to that year's, expanded, editions of the book. It survived the overhaul of the work undertaken in 1588 by Sebastian Petri and was not replaced. This example corresponds typographically with the edition printed in 1592. Despite the age of the work and competition from Ortelius' modern atlas, Petri’s late editions of Cosmographey were successful, and separate examples of its illustrations appear on the market in varying condition. The book, sometimes bound in multiple volumes, is well represented in institutional collections. Separate leaves such as this are rarely if ever catalogued in institutional collections.

Munster, S., Cosmographei, (Basel: Petri, S.) 1592.     The Cosmographia Universalis, one of the greatest geographical and historical works of the 16th century, 'taught nearly three generations of laymen most of what they knew about the world beyond their native places' (Strauss). Filled with maps, views, and rich descriptions of places throughout Europe and beyond, it was the best general source of geographical information until the advent of Ortelius' Theatrum. It was first issued by Sebastian Munster (1488 - 1552) in its 1544 German edition, and stayed in print long after its author's death in thirty five editions, and in five languages. (Of these, the 1550 and 1552 editions are widely regarded as the most complete and truest to the author's intentions: thereafter, later editors continued to add to the work's text; editions from 1588 onwards employed an entirely different set of maps produced on Ortelius' model.) Munster's goal, initially, was to rally his homeland's humanists and scholars to produce a new map of Germany in order to 'see what kind of a land our ancestors conquered for their home... bring honor to our country and place its beauties in the clear light of day.' Munster's project quickly expanded to cover the known world in its scope to produce a 'sufficiently large volume, in which I touch upon the foundation of all nations and kingdoms, their peculiarities, rivers, mountains, customs of men, royal successions, origins of the more important cities, succinct histories, religions, characteristics and fertility of lands... in Germany, however, I tarry a little longer.'.