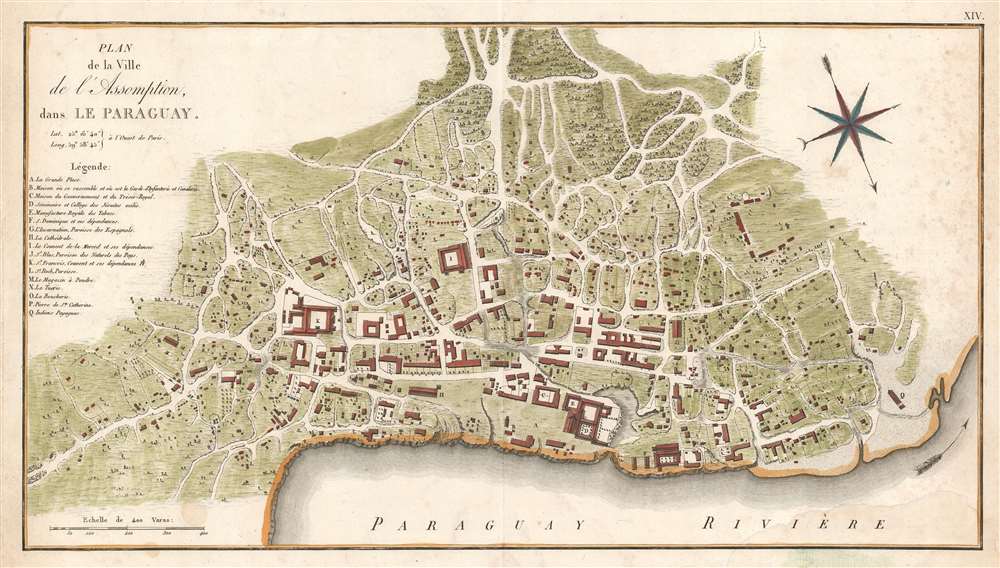 This is an extremely rare 1809 map of the city of Asunción, the capital of Paraguay, produced by the Spanish border commissioner and military engineer Félix de Azara. It appears to be the first printed plan of the city - at this stage more closely a village with a Cathedral. Azara lived in and around the city for twenty years' surveying and fixing the borders between the Spanish and the Portuguese colonies in South America. This plan is thus the result of first-hand survey work by an actual resident. An anonymous manuscript, the apparent source for the present map (with the same title) likely to be in Azara's hand survives in the Bibliotheque Nationale de France.

The plan is oriented to the southeast, placing the bend of the Paraguay River parallel to the bottom of the map. The Bahía de Asunción does not appear, and seems to be conflated with the river. A legend, keyed with letters to the map, marks out important features of the city. A plaza ground and barracks, the royal treasury and government-house, appear near the center of the plan. Adjacent to these, the college of 'the exiled Jesuits' is shown, with the royal tobacco manufactory appended to it, and possibly employing the same structures. Although this college was established in the 16th century, the Society of Jesus were repeatedly expelled from the city until finally, in 1767, they were banished from Spanish realms altogether - a decision which would be reversed in 1814. A Dominican monastery, apparently unmolested, can be seen one the shore near the plaza; the Convent of Merced and a Franciscan convent is also illustrated. The Spanish Iglesia de la Encarnación is here illustrated in its third 1697 - 1797 incarnation. The Cathedral is also present: this was the first Diocese of Paraguay; the building is not the same as today as a new Cathedral was built in 1845. The parish of St. Roch is noted, as is that of St. Blas, specifically marked as a 'church of the natives of the country.'

Noted but Not Shown

The legend's 'M' and 'N' - the powder magazine, and the slaughterhouse - are not actually marked on either this printed map, or the manuscript original in the BnF. Whether this is a deliberate or accidental omission cannot be said.

A settlement of the Payaguá people is shown at the western extent of the city, near the river. This was a group of the Guaycuru peoples of Paraguay who, by the time this map was produced, were in steep decline - although it is their name from which the toponomy Paraguay is derived. The Payaguá fought fierce riverine wars against both the Portuguese and the Spanish, but by the 18th century they were largely overwhelmed. By the time this map was produced, they were employed by the government as a river patrol. The catastrophe of the Paraguayan war of 1864 - 1870 fell disproportionately on native populations, one which the Payaguá could not recover from. The last known Payaguá died in 1942.

These maps were printed to accompany Azara's 1809 Voyages dans l'Amerique Meridionale. Perhaps thirty complete examples of the Voyages are catalogued in OCLC, and examples of the Atlas appear as well. Separate examples of the plan are rare: OCLC catalogues only three examples, appearing in the University of Central Oklahoma, the Library of Scotland, and the Bibliotheque Nationale de France.

Azara, Félix de (May 18, 1742 - October 20, 1821) was a Spanish military officer, naturalist, and engineer. He joined the Army, and received training as an engineer in a Spanish military academy. His thirteen year career in the Army would see him promoted to Brigadier General. He spent twenty years in the Rio de la Plata region of South America as a delegate under the treaty of San Ildefonso, during which period he undertook to create an accurate map of the region. On the surveys, he also recorded the fauna the region, in particular cataloguing nearly four hundred species of bird. On his return to Europe in 1801 he wrote and published in Paris his Voyage dans l'Amerique meridionale depuis 1781 jusqu'en 1801 (1809) which contained his observations on the region's geography, natural features, and indigenous groups. His work was praised for thoroughness and accuracy, and was well regarded by Darwin. He died of pneumonia on October 20, 1821. Learn More...