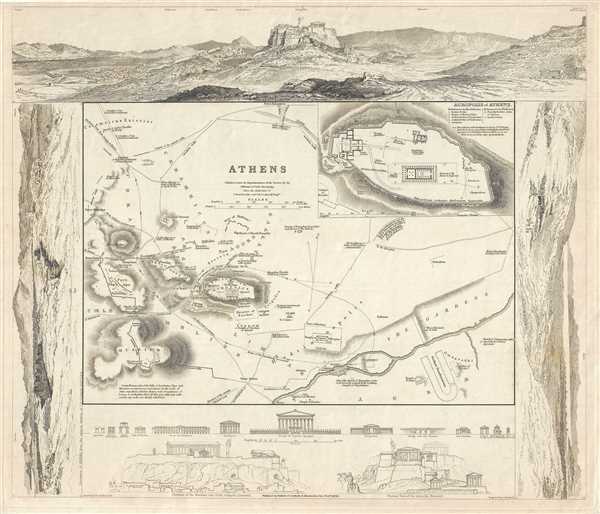 This is an attractive 1832 first edition map of Ancient Athens, Greece, issued by the Society for the Diffusion of Useful Knowledge, or S.D.U.K. The map details the city of Athens, capital of the Athenian Empire and heart of Ancient Greek culture. The vestiges of the ancient walls and the modern walls are identified; build to protect merchants as they passed from Athens to the port city of Piraeus. The map also identifies the city’s most important buildings and monuments. These include the Acropolis, the Temple of Jupiter Olympius, Temple of Thesus, the Museium Hill, the Pnyx, the Gymnasium of Ptolemy, The Gardens and Stadium Panathenaicum, among several others.

Athens, the quintessential Ancient Greek city-state, was where Greek philosophy and literature as well as the concept of democracy first evolved. This plan of Athens, based on excavations and ancient sources offers impressive and accurate detail. An inset of Acropolis of Athens in included in the top right of the map. The map proper is surrounded by a panoramic view of the city, based on C.R. Cockerell’s original drawings. The bottom of the map includes restored elevation views of the northern and western sides of Acropolis. A profile of 13 principal ancient buildings is also included.

This map is part of A Series of Maps, Modern and Ancient, issued by subscription. Each folder in the series would contain a set of two maps bound together. The map accompanying this folder, not included here, was of Pompeii. Original folder includes the names of committee members of the ‘Society’, list of maps previously published, the folder number, which is this case is XXIX, its contents and the printer and publication details. This map was engraved by J. Henshall and issued by the Society for the Diffusion of Useful Knowledge’s subscriber’s edition folder. The folder at the time was priced at 1 shilling plain or 1 shilling 6 pence colored. Published by Baldwin and Cradock.