1867 Hughes Map of Athens and Part of Attica (Boeotia, Phocis) in Ancient Greece 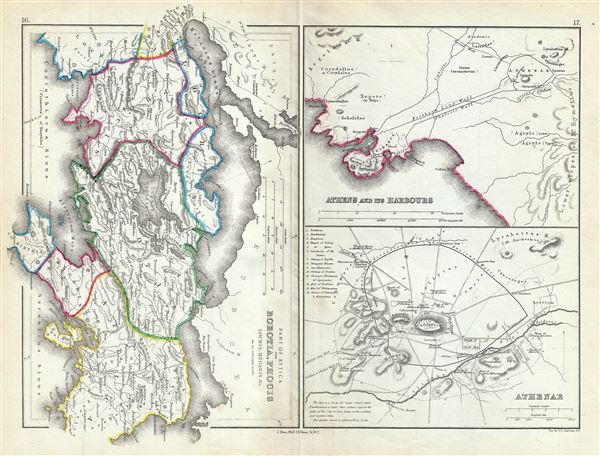 1867 Hughes Map of Athens and Part of Attica (Boeotia, Phocis) in Ancient Greece

This is a fascinating 1867 map of Athens along with parts of Attica, including Boeotia and Phocis in ancient Greece, by William Hughes. Essentially three maps on a single sheet, the first map covers Attica in ancient Greece from the Malian Gulf to the Gulf of Corinth and includes Boeotia, Phocis, Lochris and Megaris. Ancient Greek cities, including Plataea, Thebes, Athens, Magara, are identified. The map notes several roads, towns and cities and uses both contemporary and ancient names - an invaluable resource for scholars of antiquity.

The two maps in the second half of the sheet detail the city of Athens and its vicinity. The top map details Athens and its harbors. Athens, capital of the Athenian Empire, was the heart of Ancient Greek culture and the quintessential Ancient Greek city state. It was here that Greek philosophy and literature as well as the concept of democracy first evolved. This plan of Athens, based on excavations and ancient sources offers impressive and accurate detail. The Northern Long Wall and the Phaleric Wall, build to protect merchants as they passed from Athens to the port city of Piraeus are noted. Also includes the Academy of Plato.

The lower map in the second half of the sheet depicts the city of Athens. Covering the walled center of ancient Athens, this map details the ancient city's most important buildings and monuments. It names the Lyceum (Aristotle's famous school of philosophy), the Pnyx (where assemblies of the people were held) and the Cynosarges (Public gymnasium) as well as Arcopolis, the Temple of Theseus, and the Areopagus. A key in the upper left quadrant identifies 14 other ancient sites.

This map was created by William Hughes, printed by J. Bien and engraved by G.E. Sherman, for issued as plates 16 and 17 in Sheldon and Company's An Atlas of Classical Geography.