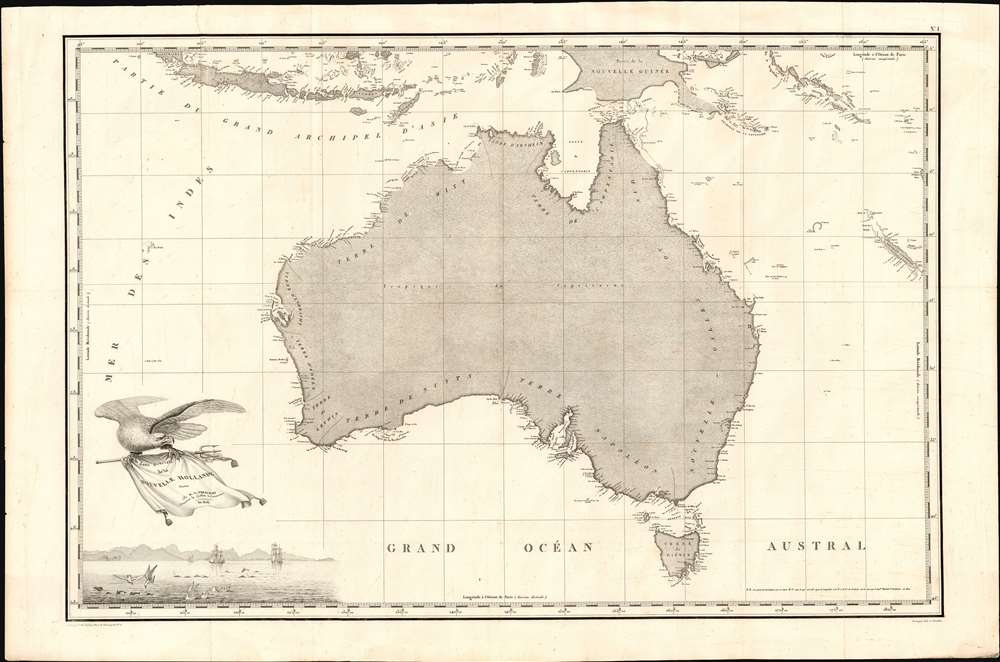 This is Louis de Freycinet's 1811 map of Australia, summing up French surveys of the continent undertaken between 1801 and 1808. Freycinet's mapping was executed as part of voyages under the command of Nicolas Baudin, which took place at the same time as Flinders made his surveys of the same region.

Freycinet's expedition under Baudin embarked to the South Seas in October 1800 aboard the ships Geographe and Naturaliste, arriving in May 1801. During the course of their Australian surveys, the French team applied names to many of the locations already explored by Flinders (the French and English would actually meet, at Encounter Bay.) Ultimately, they would chart the entire circumference of the continent still referred to by them as 'Nouvelle Hollande.'

The expedition set sail for France (via Timor) in 1803. Baudin died on the voyage, leaving the publication of the voyage to the expedition's naturalist, Francois Peron. He succeeded in producing the first volume of Voyage de decouvertes aux Terres Australes and its accompanying atlas in 1807, but died in 1810 before completion of the account. Freycinet took over the labor, and would produce the second volumes of the account and its atlas. It was this volume that contained the charts of the expedition.

The English explorer, Matthew Flinders, completed his circumnavigation of Australia before the French team - he also was the first person to use the name 'Australia' in preference to 'Terra Australis' or 'Nova Hollandia'. However, his map would not be the first to illustrate the circumnavigation in spite of his having set off for home in 1803 just shortly after the French did so. En route, Flinders was arrested by the French governor at Mauritius (despite the scientific nature of the voyage, France and England were at war) and he was detained there for more than six years. Although he would reach England again in 1810 his work was not published until June of 1814 - a day before his death, and three years after Freycinet's publication of the French journey's maps.

Terre Napoleon and Other French Toponymy

The newly-surveyed southern and eastern coasts are a different matter. The authors have here claimed the south coast as a French discovery, naming it Terre Napoléon, despite Flinders having charted the area first. His 'Spencer Gulf' and' Gulf St Vincent' are here named after Napoléon and Josephine. The east coast of Australia is dubbed 'Nouvelle Galles de Sud' And despite the French having communicated with Flinders during the course of their voyages, Freycinet throughout the map ignores the English efforts in charting the southern coast, using none of the English names in preference to the French names out of patriotism, and loyalty to the late Baudin who had chosen the names. Even in the areas initially charted by the Dutch, Baudin and company charted the coasts in finer detail (and name the newly-discovered locations according to the same, Francophone conventions.)

In addition to the chart's fine, clear lettering and delicate shading, it sports an excellent, evocative cartouche: an eagle in flight bears a trident and a banner with the map's title, over a scene depicting ships sailing along a mountainous coast, with sea birds diving for fish in the foreground and a school of dolphins in the middle distance.

This map is rare on the market. It was published in the atlas accompanying the second volume of Voyage de découvertes aux terres australes: historique. The separate map appears to be catalogued only eight times in OCLC. Voyage de découvertes aux terres australes appears to be well represented in institutional collections, however.

Louis Claude de Saulces de Freycinet (August 8 1779 - August 18 1841) was a French Navy officer and circumnavigator. In 1811 he published the first map to show a full outline of the coastline of Australia. Louis-Claude de Saulces de Freycinet joined the French Navy as a midshipman in 1793, and took part in several engagements against the British during the French Revolutionary Wars. In 1800, Freycinet and his brother Louis-Henri were attached to an expedition to Australia under Nicolas Baudin, on the ships Naturaliste and Géographe. Between 1802 1803, Freycinet captained the schooner Casuarina, executing surveys of the Australian coast. He returned to France in 1804. Returning to Paris, he prepared the maps and plans of the expedition, as well as the accompanying narrative, Voyage de découvertes aux terres australes (Paris, 1807–1816). He would later command the corvette Uranie in 1817 in order to make scientific expeditions in Rio de Janeiro and, later, throughout the Pacific - a successful voyage, despite the loss of his ship on his return. Freycinet would be admitted into the French Academy of Sciences in 1825, and was one of the founders of the Paris Geographical Society. Learn More...

Very good condition. Surface mends along folds with virtually no loss, some wear at junctures of folds.