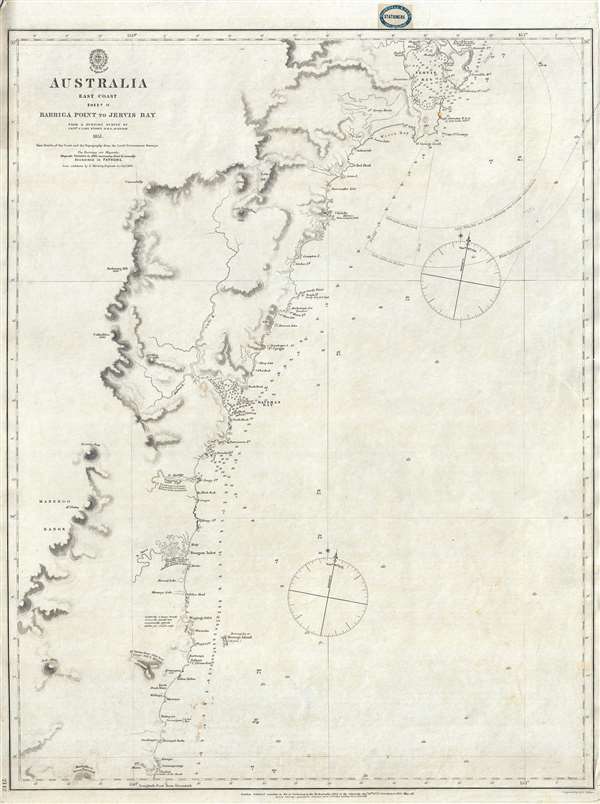 This is an extremely rare 1865 map of eastern Australia covering from Jervis Bay to Barriga Point, including Ulladulla Harbor (then under construction) and Bateman Bay. It extends south as far as Mount Townsend. There are copious annotations regarding breakers, fords, tides, and other information useful to the mariner. This is one of the earliest large scale Nautical charts provide scientifically surveyed hydrographic detail for a significant portion of the Australian coast. It is the result of marine surveys completed by Commander John Lort Stokes and the HMS Acheron.

This map was printed by John Walker for the British Admiralty Hydrographic Office as chart number 2142. The original seller for this chart appears to have been J. D. Potter, of King Street, Tower Hill, London. It subsequently found its way to Melbourne, Australia, where it was sold by Blundell and Ford, Agents for the sale of Admiralty Charts. The chart was originally published in 1852. Updated states were issued in 1860 and, as here, 1865. All examples of this chart in all editions are extremely rare. We have identified two other examples of this chart, in different states, housed in the National Library of Australia and the State Library of Victoria. An example of the present 1865 state is housed at the Beinecke Library, Yale University. We are aware of no additional examples of the 1865 state.