1581 Ortelius Map of the Duchy of Austria 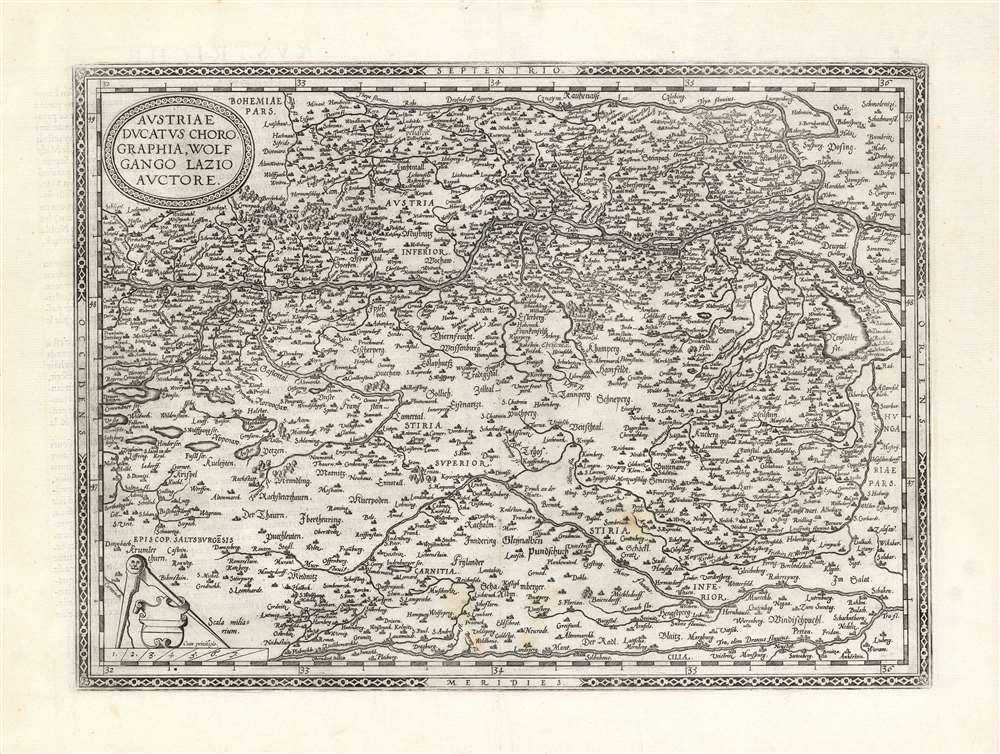 1581 Ortelius Map of the Duchy of Austria

This is Abraham Ortelius' 1570 map of Austria. It depicts the lands lying between the Thaya River in the north and the Drava in the south. Between the two flows the Danube, from Waldkirchen am Wesen in the west to Bratislava in the east (here styled Bresburg). Vienna, of course, is prominently noted.

The map is based on the unacquirable 1561 Wolfgang Lazio's Typi chorographici Provinciae Austriae. Ortelius was noted for his assiduous search for the best, first-hand maps he could source, and he was scrupulous in crediting his sources. Several of his maps - this one, as well as those of Hungary and the Tirol - were drawn from the work of the Lazio.

The woody terrain is depicted pictorially, and the map clearly evokes the complex river patterns spanning this part of the Danube Valley. Ortelius' choice of Germanic lettering stands in contrast to his typical use of Italic or Roman typefaces.

This map was engraved in 1570 and was included in the first Latin editions of Ortelius' Theatrum. The plate remained in use until its replacement in favor of a broader-coverage map (also drawn from Lazio) in 1592. The present example conforms typographically to the 1581 French text edition, of which van den Broecke estimates there were 400 printed. It also conforms to the third state, with bold hachure in the rivers and lakes not evident in earlier states. Nine examples of that edition of the book are listed in OCLC. In various editions, the separate map is well represented in institutional collections.

Ortelius, A., Theatre de l'univers, contenant les cartes de tout le monde, (Antwerp) 1581.     Abraham Ortelius' magnum opus, Theatrum Orbis Terrarum, was the world's first regularly produced atlas, which 'set the standards for later atlases . . . It was the first undertaking of its kind to reduce the best available maps to an uniform format.' (Koeman) A modestly-sized work of fifty-three maps in its first edition of May 1570, it was an immediate success: there were three further editions that year, and the work remained in print for a total of 32 editions, the last of which was 1641, well after its author's 1598 death. Ortelius added to his atlas constantly, and by 1595 the Theatrum contained 147 maps. Ortelius is renowned generally as an editor, and indeed much of the Theatrum is compiled from a variety of sources: in such cases, Ortelius was scrupulous in naming his sources. But Ortelius was also a mapmaker in his own right: many of his maps are a distillation of various sources into his own work, and there were many maps - particularly in his atlas of Biblical and ancient history Parergon - which were entirely Ortelius' work. In his role as an editor, Ortelius followed in the footsteps of Munster, whose Cosmographia was, until Ortelius, the best window on the world for the curious European reader. In terms of the artistry of his maps, Ortelius oversaw the first great flourishing of copperplate engraving in the service of cartography to occur in Northern Europe. Ortelius' work provided the model for the atlases of Mercator, Hondius, Blaeu and all their progeny in the 17th century - many of whom were to produce faithful editions of Ortelius' maps in their own productions.