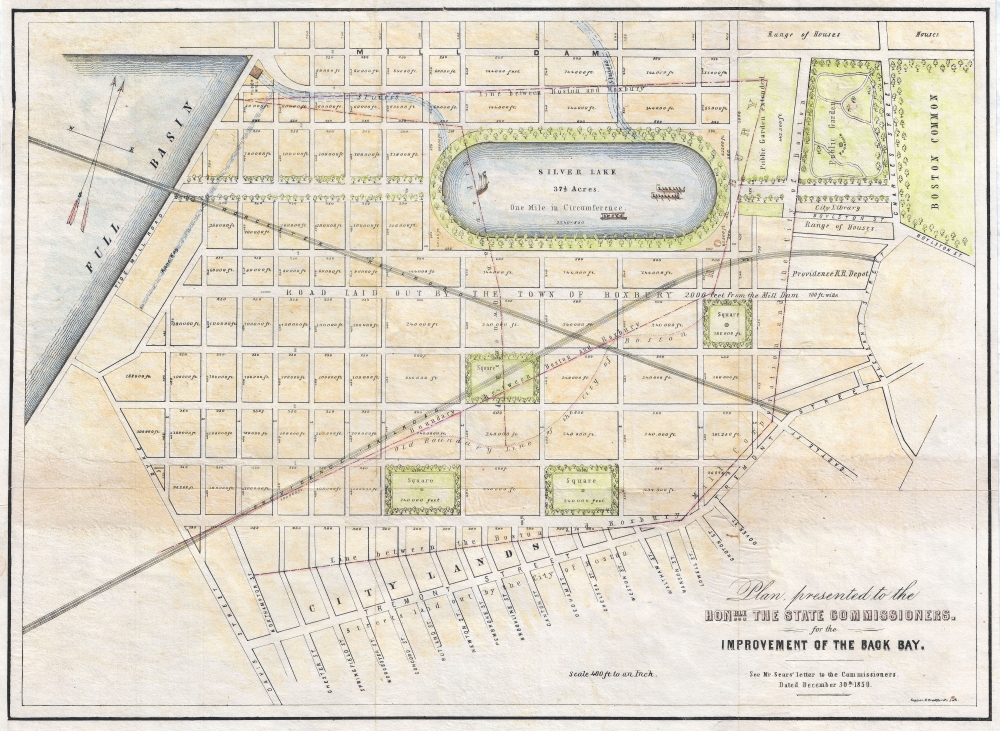 Founding document for the Back Bay, one of Boston's most beautiful neighborhoods.
$1,000.00

This is a rare pre-landfill map of Boston's Back Bay as proposed by the wealthy Boston real estate developer David Sears. The map covers the area roughly extending west of Back Bay to Massachusetts Avenue and from Beacon Street, here identified as 'Mill Dam' to Tremont Street. This is the second of two Sears proposed Back Bay plans, the first having been issued in 1849, and the second, as here, in 1850. While generally lacking street names, it is recognizable from the present of Tremont Street and the Boston Common. Unlike today's Back Bay, Sears' vision included a large lake, Silver Lake, four block size garden squares, and a large extension of the Public Garden. Sears' plan was to build a luxurious community that attracted those of wealth and means to the Back Bay - much of which he owned nearly 100 acres of pre-landfill marshy 'wasteland.'

The most notable feature in Sears' plan is the construction of a large oval 37 1/2 acre lake just west of today's Boston Public Garden. In the first Sears Back Bay proposal, dated 1849, this lake was more circular and consumed some 7 acres. In the second Sears proposal of 1850, it was reduced to the present acreage. Imagining it would greatly increase the property values in the Back Bay, Sears spent more than 10 years promoting the idea of Silver Lake. The lake, at least, proved popular among mapmakers, appearing on many early aspirational plans of Boston, including those of J. H. Colton. Despite support among the wealthy of Boston, the plan was ultimately rejected, ironically for some of the same reasons that Sears championed it. Sears claimed the lake would be a great health benefit, while the state argued that it would not only take away public lands, but also quickly fill with 'sediment and filth.' The plan for Silver Lake was formally abandoned by 1855. Sears still made a fortune on the landfill project, but his lake never materialized. Sears nonetheless remained an active member of the Chairman of the Back Bay Commission and influenced the ultimate completion of the Back Bay project.

This map was published in 1852 to accompany documents issued for the Massachusetts State Senate. It was engraved and published by Tappan and Bradford, lithographers.

David Sears II (1787 - 1871) was Boston based businessman and real estate developer active in the middle part of the 19th century. Sears lived in a large granite mansion, now the Somerset Club, at 42-43 Beacon Street, in Boston’s prestigious Beacon Hill neighborhood. At the time, the Sears mansion, then a free-standing home, was the most valuable private mansion in Boston. Sears was instrumental in a number of major Boston area real-estate developments, including the construction of the Longwood neighborhood of Brookline and the Back Bay landfill. Sears was able to trace his family in Boston to 1630 and was married by marriage to the Winthrop Family, linking him to the first Governor of the Massachusetts Bay Colony, John Winthrop. In 1844 his gift of $10,000 rescued Amherst College during a difficult time and marks the beginning of the Sears Foundation of Literature and Benevolence. Learn More...