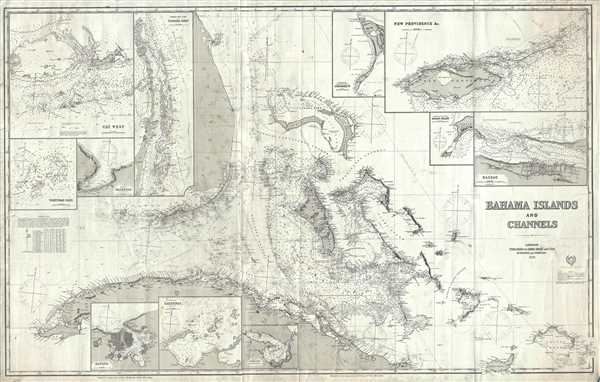 Impressive working nautical chart of the Bahamas and Floridia Reefs tracing the voyage of Thomas Reese Anderson and the barque Arcadia.

A dramatic 1872 James Imray blueback nautical chart of maritime map of the Bahamas, south Florida, and northern Cuba. This massive map covers from Cape Canaveral to northern Cuba and Great Inagua Island, and from the western top of Cuba to Turks and Caicos. The work of one of the best marine chart makers of his era, this superb chart was the best general nautical chart of the Bahama Islands, and the surrounding waters, available.

This is a working nautical chart that was owned by the Thomas Reese Anderson, the New Brunswick captain of the Arcadia, a barque built in Rockland New Brunswick. This chart traces the route of the Arcadia as it sailed down the coast of Florida, through the Florida Straits, to alight at various ports along the Cuban coast and Florida Keys. Throughout Anderson makes copious notes on the voyage and waters, as well as corrections to the chart. Anderson returned from this voyage and began a longer voyage to East Asia as captain of the Albania. After traveling extensively in the east indies, he returned to the Americas where he retired a man of substance in Sackville, New Brunswick. He died shortly after having been hit by an oncoming train in which he was, ironically, partially invested.

It was issued by James Imray and Sun from their offices at 89 Minories. It is identified as Imray chart no. 1697. It was sold by M. Langford, a watch manufacturer, goldsmith, jeweler, chronometer and nautical instrument maker, and chart seller with office at 6 St. Augustine's Parade and 53 Broad Quay, Bristol, England. Langford's pastedown appears on the verso.

Good. Unrestored working blueback chart. Repaired tear, from left side, extends about 4 inches into the map. Edge wear. Pencil marks from maritime use, could be erased. Would restore beautifully but does not necessarily require restoration.
Looking for a high-resolution scan of this?