1737 Mount and Page Map of the Bahamas, Cuba, Florida 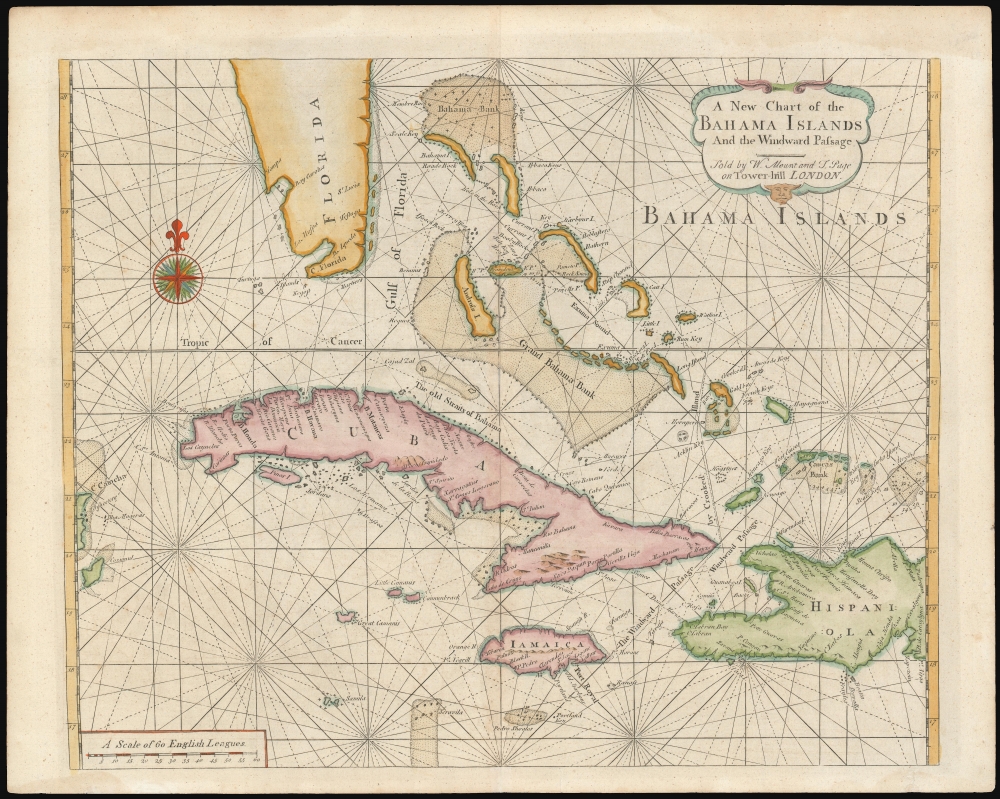 1737 Mount and Page Map of the Bahamas, Cuba, Florida

A rare 1737 map of the Bahamas, Florida, Cuba, and Jamaica issued by Mount and Page for the first edition of The English Pilot: The Fourth Book. The map, based upon a 1698 work by Samuel Thornton, illustrates the Bahamas during the 'Republic of Pirates' era (1698 - 1718), but has here been re-engraved by Mount and Page to capitalize on British interest in this region following an increased in Anglo-Franco-Spanish tensions following the founding of Georgia in 1732. Centered on the Grand Bahama bank, the map covers from the Yucatan and island of Cozumel (Mexico), to Hispaniola, and from Florida to Jamaica. Within Florida, Tampa (Tompa) is noted and recognizable. There is a tenuous mapping of the Florida Keys, with Key West (Kegost) and Tortuga (Turtuga) noted.

The 'Republic of Pirates' in the Bahamas

While resurrected in 1737 to reflect increased British interest in this area following the contentious 1732 founding of Georgia, we must stress that this map originally was drawn in 1706 - 1707 and reflects the cartography of that time. While the coverage might extend to cover many of the Greater Antilles, the real focus here is the English colony of the Bahamas. At this time, 1706 - 1718, the Bahamas were notorious 'Republic of Pirates.' Based in Nassau (New Providence), the Republic of Pirates can trace its origins to 1696, when the British privateer Henry Every (a.k.a. Avery, 1659 - c. 1715) took refuge there after ravaging Indian Ocean shipping. He unloaded 50 tons of elephant tusks and 100 barrels of gunpowder, among other treasures, bribing the English governor Nicholas Trott (1663 - 1740) to look the other way.

After Every, other pirates and privateers, mostly English, began to call at Nassau, using their wealth of plunder to seize ever greater political power. Ideally suited to raid Spanish treasure flotillas, the Bahamas grew as a nexus of English privateering and piracy, leading combined French and Spanish fleets to sack Nassau in 1703 and again in 1706. Fearing further attacks, most of the law-abiding populace to fled to Jamaica or the mainland, leaving the islands firmly under pirate control. Among the pirates who visited or based themselves in the Bahamas were Benjamin Hornigold, Henry Jennings, Edward 'Blackbeard' Teach, 'Black' Sam Bellamy, Stede Bonnet, Charles Vane, 'Calico' Jack Rackham, Anne Bonny, Mary Read, and Woodes Rogers. By 1711, it was estimated that there were more than 1000 pirates based in Nassau alone.

Lacking a formal governance, the islands were administered via the pirate 'Codes of Conduct,' a set of strict rules generally more democratic and egalitarian than most contemporaneous governmental systems. For example, the pirate codes often called for fair distribution of spoils, limited voting rights, and, contrary to the reputation of pirates, punishment for rape and theft. The 'Pirate Republic' lasted until 1718 one of the their own, the English buccaneer Woodes Rogers (c. 1769 - 1732), turned official, accepting a Royal Governorship and turning the Bahamas into a Crown Colony.

This map has an interesting and confused publication history. It was originally engraved by John Thornton sometime around 1698. Around 1707 the plate was revised to reflect Samuel Thornton, John Thornton's heir. The map was subsequently issued sporadically until 1737, when completely new plate by William Mount and Thomas Page, the present example, for their 1737 issue of the The English Pilot, the Fourth Book. The most significant difference between these two plates, aside from the' Thornton' vs 'Mount and Page' imprints, is that the Thornton had rhumb lines passing through the land. The rhumb lines were removed from the land by Mount and Page to make for easier reading. In 1749, the Irish pirate publisher George Grierson resurrected the Thornton map, with minor modifications to the imprint. A close comparison suggests that the Grierson map is actually a modified issue from the old Thornton plate, with all of its flaws, which Grierson must have somehow acquired. The 1737 Mount and Page issue, as here, enjoyed only a short publication run, being quickly superseded by other more detailed and general maps in later editions of The English Pilot. Very rare to the market.

John Thornton (October 8, 1641 - January 23, 1708) was a British chartmaker, sea captain, publisher and engraver active in London during the late 18th and early 19th centuries. Thornton apprenticed to John Burston where mastered the art of manuscript maritime cartography as practiced by the Thames School. By the 1660s Thornton, working with John Seller and William Fisher, began publishing printed nautical charts and was the only Thames School cartographers to successfully transition to print. Thornton published numerous maps both independently and with some of the most prominent British publishers of his day, including the aforementioned as well as Herman Moll, Robert Morden, James Clark, Robert Greene, and Philip Lea. From around 1665 Thornton took over from Seller the production of the English Pilot. Upon his death in 1708 Thornton willed his charts, copper plates, instruments, and 'all things belonging to my calling' to his son, Samuel Thornton, who continued to republished his father's work, with few updates, until about 1715. Learn More...

Mount, W. and page, T., The English Pilot: The Fourth Book, (London: Mount and Page) 1737.     The English Pilot, published from 1671 to 1794, was the brain child of John Seller (1630 – 1697). Seller, recognizing a lack of quality English-made nautical charts, began to compile and engrave charts for a new maritime atlas as early as 1669. That same year he announced the publication of the English Pilot. The work was intended to be published in geographically specific volumes such that only the necessary maps need accompany a voyage. The English Pilot, The First Book, covering English waters, was published in 1671. Despite his claims, most of the maps in the first book were not English productions, but rather worn out Dutch map plates purchased as scrap and then retooled with Seller's imprint. Nonetheless, the work proved popular among merchant seamen and earned him the title 'Hydrographer in Ordinary' as well as copyright protection for 30 years. Seller failed to fully realize his grand scheme but it was picked up in earnest by other cartographers, including William Fisher, John Thornton, John Wingfield, Richard Mount and Thomas Page. Subsequent volumes followed including The Second Book, covering the Mediterranean; The Third Book covering African and Arabian coasts; The Fourth Book comprising the first British atlas exclusively dedicated to the Americas; The Fifth Book, a volume of practical Navigation; and The Sixth Book focusing on East Asian waters. The English Pilot was issued in over 40 editions with a print run exceeding 100 years. It was also pirated by George Grierson and published in Dublin under his imprint. It is one of the most important British atlases ever published.