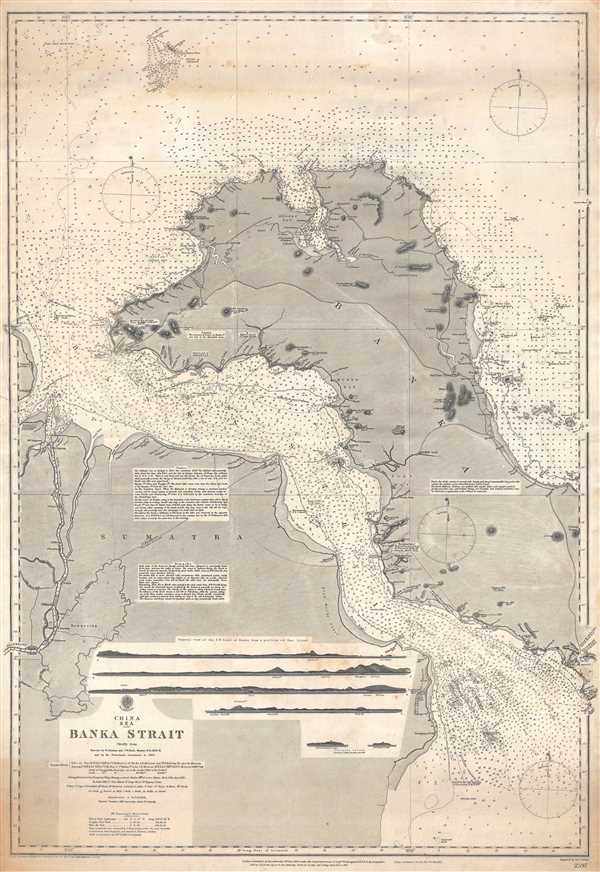 Bangka Island was the site of substantial tin production beginning in the mid-19th century.

This is an 1893 British Admiralty nautical chart or maritime map of the Bangka (Banka) Strait, the strait which separates Bangka (Banka) Island from Sumatra in Indonesia. The map depicts the region from the mouth of the Musi River to Toboali Bay and from the Karimata Strait to the island of Sumatra. Highly detailed, myriad depth soundings, measured in fathoms, are indicated throughout. Numerous coastal locations on Bangka Island are labeled, including rivers, bays, and points. Towns, such as Blinyu, Tobali, Jibuse, Muntok, and Sungi Slan, are labeled. Main roads connecting the towns are illustrated, as are mountains throughout the island. On Sumatra, the Musi River is depicted inland to Palembang, with depth soundings indicated the entire illustrated length of the river. Notes on tides and other important remarks are situated in the lower left corner, along with views of the southwest coast of Bangka Island and the coast of Lucipara Island.

A Short History of Bangka Island

Records from the 15th century indicate that Bangka Island played a significant role in Chinese trade at that point in history. It was not until around 1710 when tin was discovered on the island that migrants began to come to Bangka. Even today, descendants of Chinese immigrants from this era still make up a large portion of Bangka's population. By 1722, the Dutch East India Company had managed to secure a monopolistic tin purchase agreement, but hostilities soon arose between the Dutch and the ruling Sultanate. In 1811, the British invaded Java, which precipitated the massacre of the staff of a Dutch post on Bangka, which, in turn, led to him being deposed and executed by the British. Bangka was then ceded to the British by the deposed sultan's successor, and the island was then exchanged with the Dutch for Cochin in India in 1814. By the end of the 19th century, Bangka had become an important production center for tin in the region, with an annual output of around 1,250 tons.