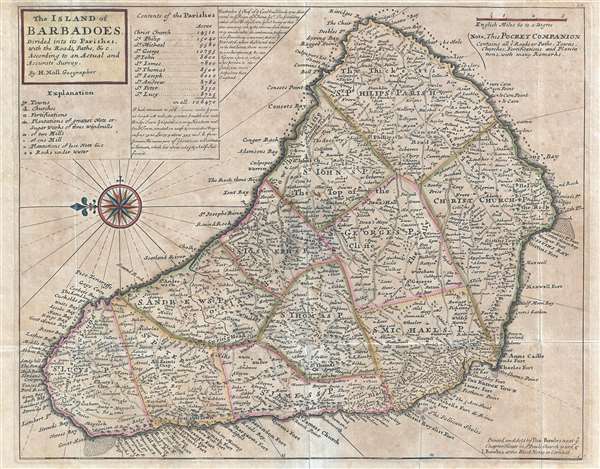 This is a 1736 Herman Moll map of the island of Barbados. The map depicts the entire island with north oriented to the left. The island is divided into eleven parishes. Myriad locations are labeled all over the island, including the island's capital at Bridge Town. These locations are different than those illustrated on other maps because most do not appear to be towns, but individual plantations labeled by using the owner's last name. A handful of towns do exist, such as Bridge Town, Speights Town, and Oistins Town. Numerous locations, bays, and points are labeled all around the coast of the island. A few churches are noted with pictograms of a church, along with roads which snake all over the island, and a couple rivers. Topography is depicted in profile. A legend is located in the upper left corner below the title, along with a table listing the acreage of each parish and the total area of the island. Two comments, one discussing the size of the island, the other relating its history, also are included on the upper left. A beautiful compass rose sits below the title and legend.

This map was produced by Herman Moll and printed posthumously by Thomas Bowles for inclusion in Moll's Atlas Minor as plate no. 59.