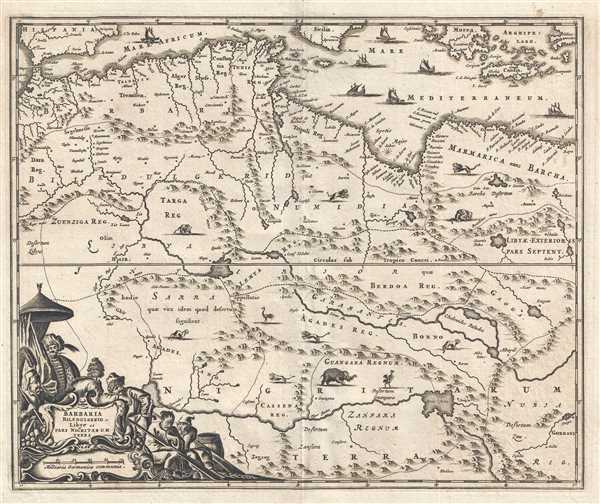 From the French edition of one of the foundational works of African studies.
$350.00

This is a 1686 Olfert Dapper map of North Africa. The map depicts the retion from the Strait of Gibraltar to Libya and Crete and from southern Spain, Sicily, and the Mediterranean Sea to the Niger River. Highly detailed, myriad locations, particularly along the African coast of the Mediterranean Sea, are labeled, such as Tangiers, Algiers, and Tripoli along with Gibraltar, Sevilla, and Grenada in Spain and Syracuse in Sicily. Numerous rivers and lakes are illustrated and labeled throughout northern Africa, along with several unlabeled mountain ranges. Beautifully engraved boats are included in the Mediterranean, as well as several different species of animals in Africa. Some of these appear to be lions, along with an ostrich, and elephant, and other big cats. A decorative title cartouche is situated in the lower left corner.