1888 Kurz and Allison View of the Civil War Battle of Antietam, Maryland 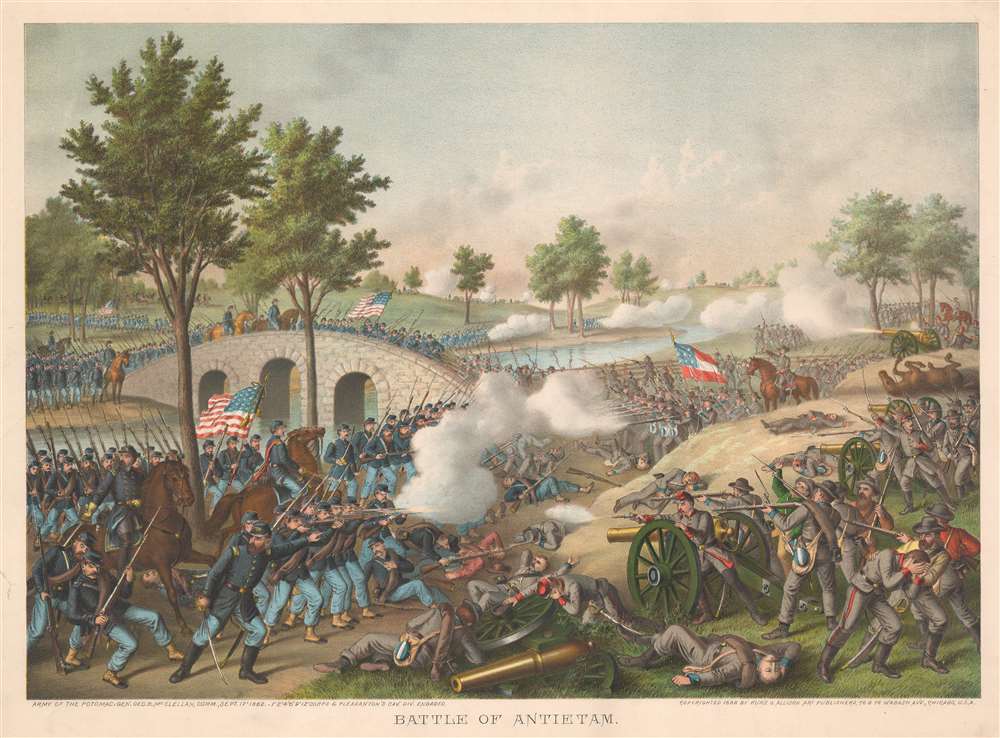 1888 Kurz and Allison View of the Civil War Battle of Antietam, Maryland

The 'bloodiest' day in American history.

This is an 1888 Kurz and Allison chromolithograph view of the Battle of Antietam, Maryland. The view is hand embellished with guache color. The Battle of Antietam took place on September 17, 1862 and is remembered as the bloodiest day in American history. Antietam was also the last battle in General Robert E. Lee's first invasion of the North. Kurz and Allison's view focuses on the action on 'Burnside's Bridge'.

Rohrbach's Bridge (now known as 'Burnside's Bridge') was a three-span, 125-foot stone bridge, the southernmost crossing of Antietam Creek. General Ambrose Burnside commanded four divisions (12,500 men) on the east side of Antietam Creek. On the morning of September 17, he led his men in a diversionary attack. However, he was told to wait for orders before commencing his attack, and those orders arrived late. Burnside was also put out by General George McClellan's decision, which limited his preparations for the coming assault. Burnside's men attacked the bridge several times, suffering enormous casualties each time. It took three attempts to secure the bridge and the Federals only succeeded because the Confederate forces defending the bridge began running low on ammunition. Continued setbacks (including Union forces neglecting to bring ammunition) repeatedly delayed Union attacks and allowed Confederate reinforcements to arrive. These fresh troops destroyed the last few Union attacks and held their ground. Lee's forces began withdrawing across the Antietam the following day.

The Battle of Antietam

The single bloodiest day in U.S. history, the battle of Antietam claimed a combined total of 22,717 killed, wounded, or missing and has the distinction of being the first field army level engagement in the Eastern Theater of the Civil War to take place on Union soil. The battle was fought between Confederate General Robert E. Lee's Army of Northern Virginia and Union General George B. McClellan's Army of the Potomac near Sharpsburg, Maryland and Antietam Creek. The battle is referred to by both names, although the Battle of Sharpsburg is used primarily in the southern United States. Who emerged victorious from the Battle of Antietam is a difficult question, since both sides suffered huge casualties yet had something to celebrate. The Union Army successfully stopped the Confederate invasion of Maryland but was unable to capitalize on the advantage won during the battle to completely defeat Lee. As such, Lee was able to retreat with his army to fight another day. Historians deem this a strategic victory for the Union. Perhaps the most significant outcome of the battle was Lincoln's decision to follow the victory by announcing the Emancipation Proclamation, which prevented both England and France from officially recognizing the Confederacy.

Chromolithography is a color lithographic technique developed in the mid-19th century. The process involved using multiple lithographic stones, one for each color, to yield a rich composite effect. Oftentimes, the process would start with a black basecoat upon which subsequent colors were layered. Some chromolithographs used 30 or more separate lithographic stones to achieve the desired product. Chromolithograph color could also be effectively blended for even more dramatic results. The process became extremely popular in the late 19th and early 20th centuries when it emerged as the dominate method of color printing. The vivid color chromolithography produced made it exceptionally effective for advertising and propaganda imagery.

This view was created and published by Kurz and Allison in 1888. Two examples are cataloged in OCLC and are part of the collections at the Library of Congress and the McNair Library at the National Defense University. Scarce.