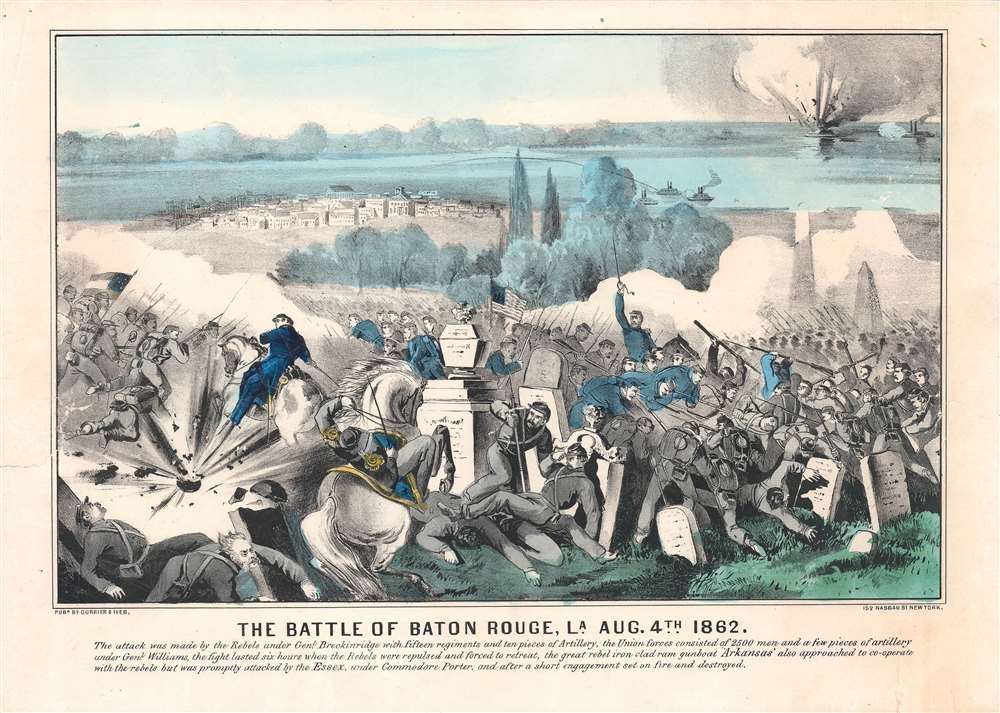 This is Nathaniel Currier and James Ives' view of the Battle of Baton Rouge fought on August 5, 1862 (not August 4 as stated here), during the American Civil War (1861 - 1865). Though the Union commander, Gen. Thomas Williams, was killed in the battle, the city was successfully defended from a Confederate attack, securing Union control of New Orleans.

This dramatic battle scene illustrates the intense fighting at Magnolia Cemetery. Union troops, many painted blue, defend against attackers from two sides. Both armies have bayonets fixed for close quarters fighting. At left is a remarkable depiction of the moment just after the explosion of an artillery shell. In the background, the Union Navy provides shells Confederate positions. A Confederate ironclad, the Arkansas, burns in the background after being set on fire by its own sailors and shelled by Union ships.

The Battle of Baton Rouge

Part of the wider conflict for Louisiana and control of the Mississippi River, the Battle of Baton Rouge followed the occupation of Union New Orleans in late April 1862. The state government fled a month after the capture of New Orleans, when Union troops moved in. In late July, the Confederates sent a force from Vicksburg to recapture Baton Rouge and, it was hoped, New Orleans.

Though the print is dated August 4, the fighting in fact took place the following day, on August 5. The Confederates were well-supplied and facing green Union forces with minimal training under the command of Gen. Thomas Williams. However, Williams had foreknowledge of the attack and naval support, which was ultimately the deciding factor. Union forces successfully repelled the Confederate attack. The Confederate C.S.S. Arkansas, an ironclad, had engine trouble outside Baton Rouge and could not join the battle (it was later scuttled to prevent it being captured by Union forces).

The fierce, close-quarters fighting in the streets of Baton Rouge took a toll on both sides, including the life of Gen. Williams, and both armies retreated after the battle. The battle was notable, however, in securing the Union occupation of New Orleans and weakening Confederate land and naval forces on the Mississippi River, permitting the siege and capture of Vicksburg the following year.

This print was published by Nathaniel Currier and James Ives in 1862 or early 1863. We note it among the institutional holdings of seven libraries, museums, and research institutions in the United States.

Good. Some creasing in the margins, especially at left. Pinholes at top-left corner. Small wormhole in top margin near center.