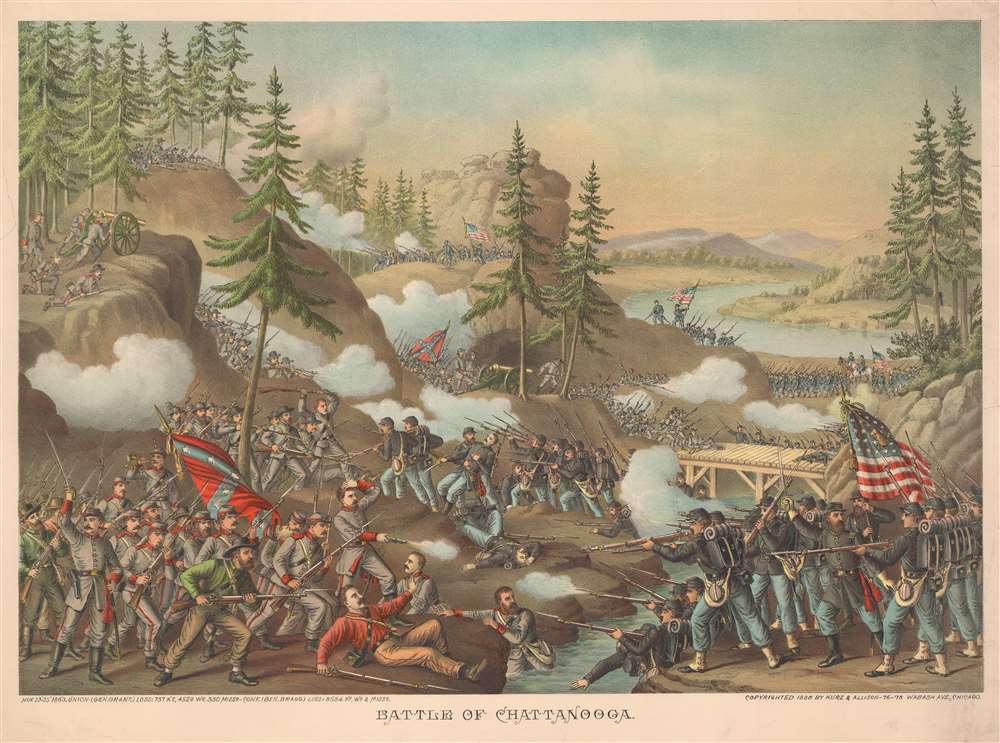 This is an 1888 Kurz and Allison view of the American Civil War Battle of Chattanooga. Union forces appear on the right and are illustrated advancing on Confederate positions. Smoke and flames erupt from the barrels of both armies' rifles. Although unlabeled, given the terrain, this view likely depicts either General Sherman's or General Thomas's assault of Missionary Ridge.

The Chattanooga Campaign was a series of three major battles. Fought to break the Confederate siege of Chattanooga, Union forces under Major General Ulysses S. Grant were pitted against those under the command of Confederate General Braxton Bragg. These battles, one led by General Joseph Hooker at Lookout Mountain, one led by General George Henry Thomas at Missionary Ridge, and one led by General William Tecumseh Sherman, also at Missionary Ridge, broke General Bragg's Confederate troops after three days of hard fighting forcing Bragg into retreat. The victories secured Union control of Chattanooga and ended Confederate control in Tennessee. It also opened the way for General Sherman's Atlanta Campaign and his famous (and infamous) March to the Sea.

This map was created and published by Kurz and Allison in 1888. The only other cataloged example is part of the collection at the Metropolitan Museum of Art. This piece is not cataloged in OCLC.

Metropolitan Museum of Art 62.556.14.
Looking for a high-resolution scan of this?