1891 Kurz and Allison View of the American Civil War Battle of Corinth, Mississippi 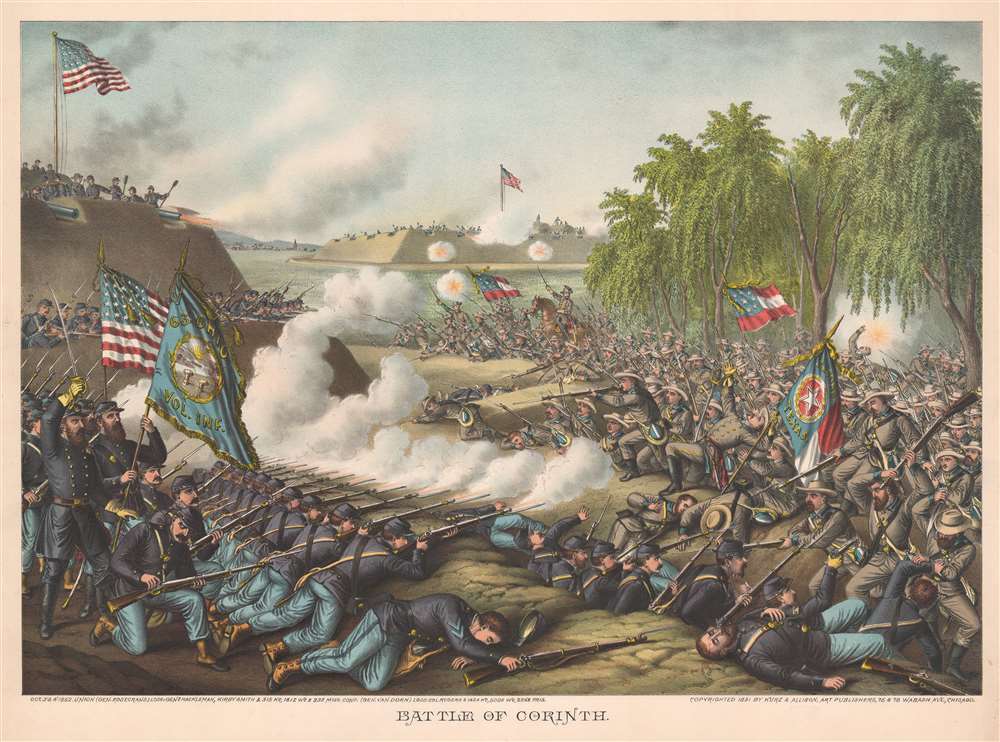 1891 Kurz and Allison View of the American Civil War Battle of Corinth, Mississippi

Focuses on part of the battle fought between the 63rd Ohio and 2nd Texas Infantry Regiments.

This is an 1891 Kurz and Allison chromolithograph view of the Battle of Corinth (also known as the Second Battle of Corinth) during the American Civil War. The Union Army's 63rd Ohio Infantry Regiment appears on the left side repelling an attack on Battery Robinett by the Confederate Army's 2nd Texas Infantry Regiment from the right side. Soldiers manning both battle lines fire on the other from point blank range and the regimental colors for both units are prominently illustrated.

Colonel William P. Rogers, commanding officer of the 2nd Texas, was killed during the charge. It is said that he had his horse shot out from under him and, almost at that same moment, the regimental flag bearer was shot and killed. Rogers grabbed the flag and continued the assault, leading his men up the battery's ramparts. He was shot during this charge, making him the fifth color bearer for his regiment to be killed that day outside Corinth.

The Battle of Corinth

The Battle of Corinth took place on October 3 - 4, 1862, in and around Corinth, Mississippi. Union forces, led by Major General William Rosecrans, were entrenched in Corinth awaiting an attack by Confederate Major General Earl Van Dorn. Van Dorn's objective was to seize Corinth and then proceed north into Tennessee to help Confederate General Braxton Bragg in his push north into Kentucky. Van Dorn's forces saw success on the first day of battle, driving Union forces from their thinly manned first line of defense back to their more easily defended second line, which included three gun batteries. On the second day, Van Dorn's men achieved limited successes, but Rosecrans's army either turned back or recaptured every objective Van Dorn seized over the course of the day. Due to heavy losses and having not achieved his objective of driving the Union Army out of Corinth, Van Dorn retreated on the afternoon of October 4.

This view was created and published by Kurz and Allison in 1891. We note only two cataloged examples which are part of the collections at the Library of Congress and the Metropolitan Museum of Art. This print appears occasionally on the private market.