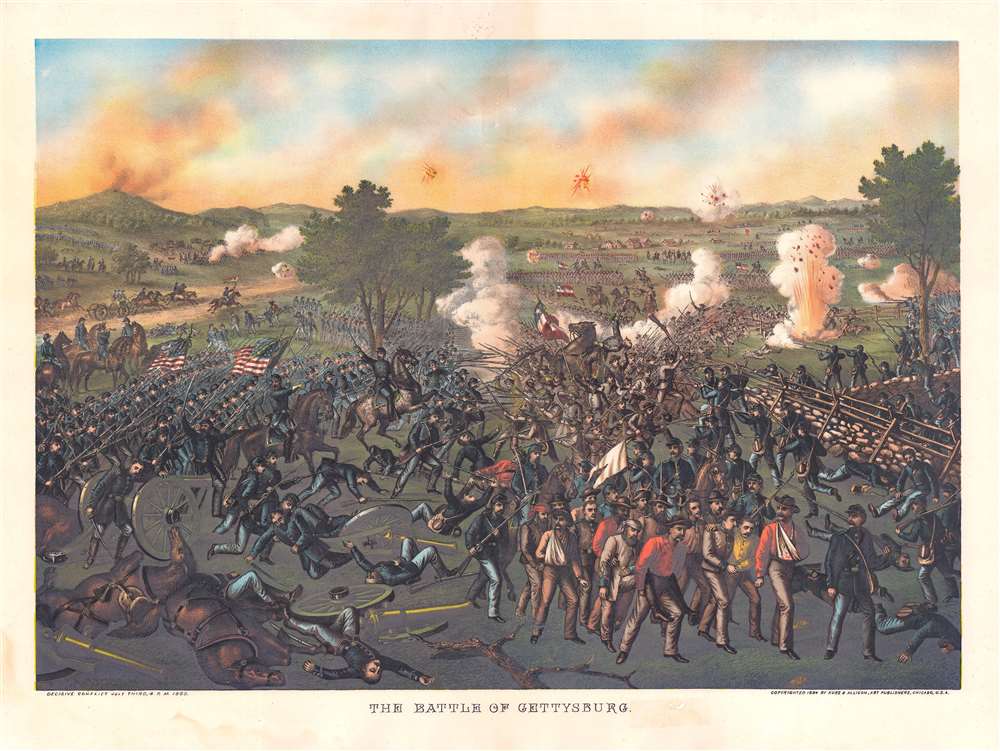 This is a stunning 1884 Kurz and Allison chromolithograph view of the Battle of Gettysburg, specifically Pickett's Charge - an event considered to be the turning point of the American Civil War (1861 - 1865).

After gaining ground on July 1 and 2, Confederate General Robert E. Lee (1807 - 1870) renewed his offensive assaults on the morning of July 3, but was unable to dislodge Union forces from the high ground south of Gettysburg. Lee postulated that Union forces must have reinforced their flanks to repulse the Confederate attacks, thus deduced it was likely the Union center was weakened. He changed his overall strategy to take advantage of this perceived weakness, planning a large-scale assault on the Union center lines at Cemetery Ridge. In fact, Union commander Major General George Meade predicted this strategy and was prepared to meet the assault. 12,500 Confederate troops stepped off at 3 p.m. that afternoon and charged into a barrage of Union artillery. Union lines were three quarters of a mile away. After being raked by artillery and musket fire as they marched across open field, Confederate troops reached Union lines. Gaps began to form in the Union lines, particularly near a 90-degree angle in the low stone wall behind which Union soldiers were concealed. Confederate forces poured through the breach, but they were met by fierce hand-to-hand combat and point-blank artillery fire. Not long after the breach formed Union forces successfully closed ranks. This angle in the stone wall (illustrated here on the right) has become known as the high-water mark of the Confederacy. Confederate casualties during the charge exceeded fifty percent. Twenty-six of the forty field grade officers in Pickett's division became casualties. All three brigade commanders were casualties, one of which was killed and another mortally wounded. That night, Lee and the Army of Northern Virginia began the long retreat to Virginia.

The Battle of Gettysburg

Fought from July 1st through the 3rd, 1863, the Battle of Gettysburg was the defining moment of the American Civil War (1861 - 1865). The Confederacy began the war by advancing aggressively and successfully under the brilliant generalship of Maj. General Robert E. Lee (1807 - 1870). Buoyed by his May 1863 successes at the Battle of Chancellorsville (April 30 - May 6, 1863), Lee launched a grand invasion of Pennsylvania, intending to push as far as Harrisburg, or potentially Philadelphia. The Union and Confederate forces first engaged on July 1 of 1863. The Confederates met with some initial success, seizing weekly defended but strategic ridges before reaching a stalemate. The Confederates decided to break the stalemate with an aggressive charge on the well-fortified Union position of Cemetery Ridge. Pickett's Charge, as it become known after its leader, the Confederate Maj. Gen. George E. Pickett (1825 - 1875), was a disaster, incurring heavy losses and turning the tide of the battle. In subsequent engagements, Union forces again and again prevailed forcing the Confederate army into a torturous retreat to Virginia. The Battle of Gettysburg resulted in between 46,000 and 51,000 casualties, proving the costliest single battle in U.S. history. In the aftermath of the battle, on November 19, President Abraham Lincoln (1809 - 1865) issued the historic Gettysburg Address, redefining the purpose of the war. Pickett's Charge proved to be the Confederate high-water mark. Not only did the Confederacy lose the Battle of Gettysburg, but from this point forward, they also began to lose the war.

The publishing firm Kurz and Allison created a series of thirty-six battle scenes from the American Civil War in the late 1880s and early 1890s. At the time of their publication, historical interest in Civil War was at an all-time high with many of the participants still alive, heroes to the subsequent generation. Kurz and Allison's views, due to their high production quality, were likely the most popular series of Civil War views ever published. In a style reminiscent of Currier and Ives, the chromolithographs were not meant to be purely historical representations, and from time to time, included historical inaccuracies. Even so, 'prints depicting the Civil War battles by Kurz and Allison are among the most sought-after collectibles of Civil War enthusiasts.'

This view was published by Kurz and Allison in 1884. This view is not cataloged in OCLC. The Library of Congress has an uncolored example in their collection. Original examples are scarce to the market.

Very good. Mounted on linen.
Looking for a high-resolution scan of this?