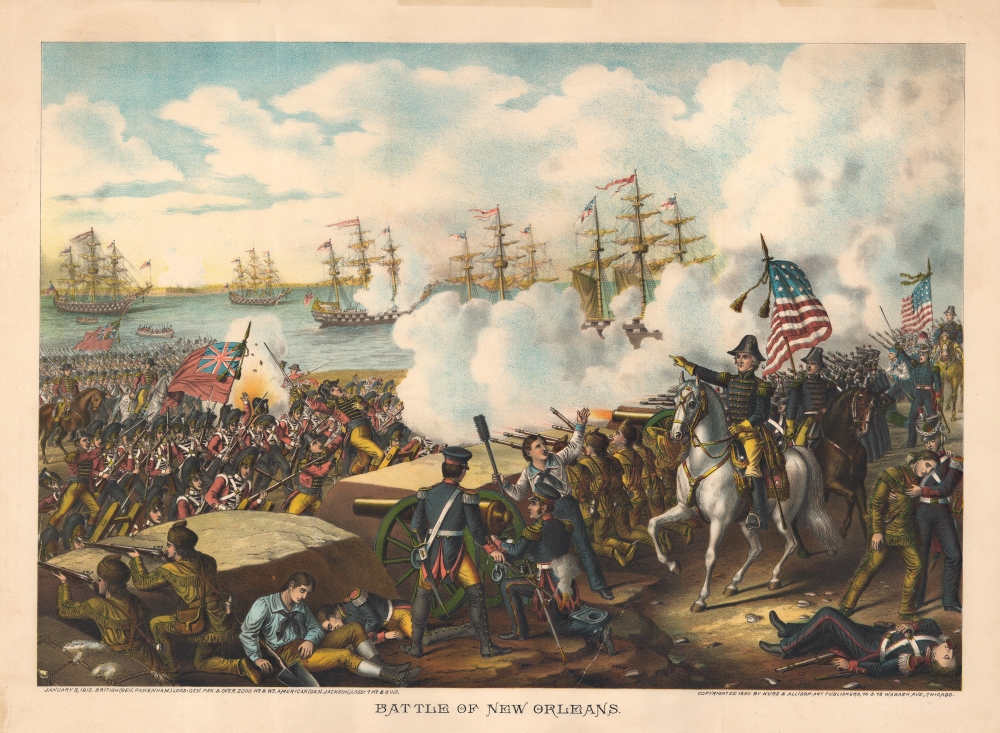 A stirring 1890 Kurz and Allison chromolithograph of the 1815 Battle of New Orleans, a major American victory in the closing days of the War of 1812 (1812 - 1815). Although in a sense futile, as a treaty had already been signed ending the war, the battle was nonetheless important for thwarting British hopes of controlling the Mississippi River and propelling Andrew Jackson to the status of national hero, facilitating his later election as president.

This view is oriented towards the southeast, with the Mississippi River, dominated by British ships, in the background. It depicts the January 8, 1815 British attack on American positions along the Rodriguez Canal, a small creek next to a sugarcane field on the outskirts of New Orleans. At right, Andrew Jackson sits decisively atop a white horse giving orders, while a British officer, likely meant to be Gen. Pakenham, is mortally wounded while leading the assault. The view partly reflects the ragtag, multiracial makeup of the defenders.

The Battle of New Orleans

A remarkable encounter in every way, the 1815 Battle of New Orleans had a significant impact on the future direction of the United States, most notably by elevating Andrew Jackson to national prominence. The battle took place after the Treaty of Ghent ending the War of 1812 had already been signed, but news of it had not yet reached America, nor had it been approved by Congress. It was also notable for the lopsided casualty numbers between the British and Americans.

The battle came at the end of the Gulf Campaign, a British attempt to gain control of the mouth of the Mississippi and challenge American territorial claims following the Louisiana Purchase. This approach made New Orleans the site of a decisive battle. British preparations proceeded smoothly, but American commander Andrew Jackson, sensing the likelihood and direction of the British attack, prepared formidable defenses.

Constructing a defensive line ('Line Jackson') at the Rodriguez Canal, Jackson was able to fend off British probing attacks and further fortify his position in late December 1814 and early January 1815. A combination of poor decisions by British commanders and effective leadership by Jackson allowed the American force, composed of an assemblage of militia units, Jean Lafitte's Baratarian pirates, Native American (Choctaw) allies, and volunteers from throughout the American South, including Black freedmen, to mount a successful defense.

A full-scale British assault directly into American artillery fire on January 8 was repelled with minimal casualties for the defenders (Kurz and Allison exaggerate the relatively low number of American casualties here), while roughly one-quarter of the British force was killed or wounded, including most of its officers. As a result, British designs on the former French Louisiana were crushed, Jackson became a national hero, and the Federalist Party, which was clamoring for peace with Britain and considering the secession of New England states from the Union on the eve of the battle, was undermined as a political force. In the mid-late 19th century, the Chalmette Monument was constructed near the site of the battle.

This print was produced and published by the firm Kurz and Allison in Chicago in 1890. We note it among the collections of four institutions (the Library of Congress, the Tennessee State Library and Archives, the Gilder Lehrman Institute of American History, and the Huntington Library).