1891 Kurz and Allison View of the Civil War Battle of Nashville, Tennessee 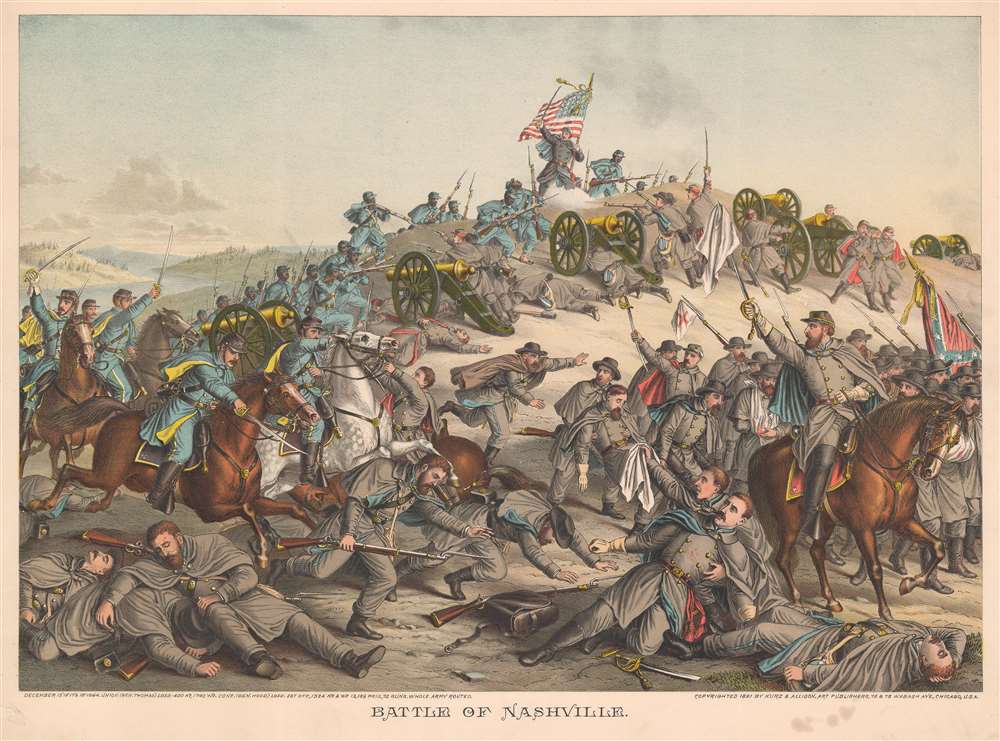 1891 Kurz and Allison View of the Civil War Battle of Nashville, Tennessee

This is an 1891 Kurz and Allison chromolithograph American Civil War (1861 - 1865) view of the Battle of Nashville, Tennessee. Union troops are illustrated on the left storming Confederate redoubts. United States Colored Troops are prominently featured courageously advancing in the face of point-blank musket fire. The bulk of the illustrated Confederate soldiers appear in the lower right retreating from determined Federal soldiers.

The Battle of Nashville

The Battle of Nashville was the last major battle in the Western Theater of the Civil War and represented the end of large-scale fighting outside the coastal states. Fought between the Confederate Army of the Tennessee command by Lieutenant General John Bell Hood and a combination of Federal forces under the overall command of Major General George H. Thomas, the battle took place on December 15 - 16, 1864. Remembered as one of the largest Union victories of the war, Thomas took the initiative, routing Hood's army, effectively neutralizing its capacity to wage war. Hood's army retreated south, and Union cavalry pursued the fleeing Confederate force. Due to supply issues, the Union forces were unable to capture Hood's fleeing army. Hood was forced to resign his command in January 1865 and received another field command. Because of poorly reported figures, Confederate casualties suffered during the Battle of Nashville and the preceding campaign cannot be known for certain. Nonetheless, the Army of the Tennessee started the campaign with a strength of 38,000 men and it was reported in January 1865 that they were down to 15,000.