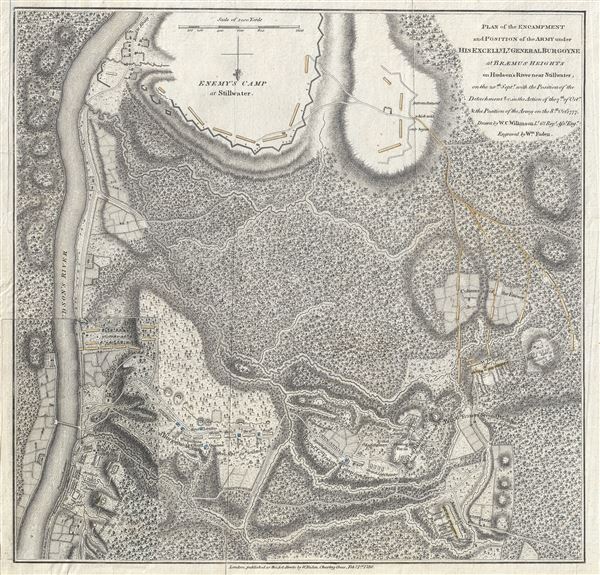 Map of the Battle of Saratoga with rare flap.

This is a scarce 1780 American Revolutionary War Map illustrating the Battle of Saratoga, a decisive engagement in the favor of the Colonial armies. Oriented to the south, this map covers an region roughly 9 miles south of Saratoga, New York. The map details lands from the Hudson River westward and from Stillwater northwards. It illustrates the disposition of the two armies, with the British under General John Burgoyne at the bottom of the map and the American Colonial encampment at the top. The main body of the map illustrates the positions of Burgoyne's Army from September 20 to October 7. A flap affixed to the left side of the map reveals the army new position as of October 8. This flap is often lost and its presence here adds much to this military plan.

The Battles of Saratoga (September 19 and October 7, 1777) marked the climax of the Saratoga Campaign. giving a decisive victory to the Americans over the Britisg. British General John Burgoyne led a large invasion army up the Champlain Valley from Canada, hoping to meet a similar force marching northward from New York City; the southern force never arrived, and Burgoyne was surrounded by American forces in upstate New York. fought two failed battles in an attempt to break out. Thus trapped by superior American forces, with no relief in sight, Burgoyne surrendered his entire army on October 17. His surrender, says historian Edmund Morgan, 'was a great turning point of the war, because it won for Americans the foreign assistance which was the last element needed for victory.'

The map was drawn by the Irish officer William Cumberland Wilkinson who was captured along with the rest of Burgoyne's army at Saratoga. Wilkinson composted this and several other maps illustrating the battle while in captivity. He was paroled in September of 1780, but this map made its way back to the British Isles long before the man himself. It was engraved by William Faden and copyrighted on February 1st of 1780. It was included in Burgoyne's apologist book A State of the expedition from Canada in which he defends his actions. As Streeter remarks,

Burgoyne defends his actions in the campaign that led to the disaster at Saratoga. He proves in this work that his army was half the size he had demanded, and was badly provided for. The work is one of the best sources on the campaign.

William Cumberland Wilkinson (1756 - January 6, 1802) was an Irish officer in the British Army. He was born in Dublin to Reverend Thomas Wilkinson and Marguerite Susanne Maret de la Rive. Wilkinson was a talented officer that served as a Captain-Lieutenant and military engineer in the 62nd Foot Regiment under British General John Burgoyne during the American Revolutionary War. Wilkinson, like all of Burgoyne's officers surrendered at the Battle of Saratoga. He is best remembered in cartographic circles for completing a series of maps illustrating the disastrous Saratoga Campaign while in captivity. In 1780 Wilkinson was given a special disposition by his American captors to return to Ireland. He died in Belfast in January of 1802. Learn More...

Burgoyne, John, A State of the expedition from Canada : as laid before the House of commons… (London: J. Almon) 1780.

Very good. Some wear along origial fold lines. Minor verso reinforcemnt to fold just to the left of imprint.