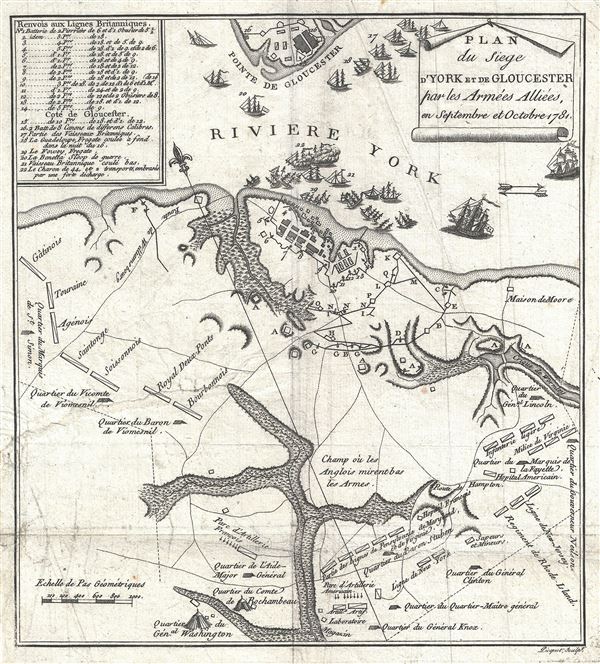 Detailed study of the final battle of the Revolutionary War - the Battle of Yorktown.
$600.00

An exceptional 1787 map of the Battle of Yorktown by David Ramsay and Charles Picquet. Ramsay prepared this map for issue in his Histoire de la Revolution d'Amerique, a period account the Siege of Yorktown in which Ramsay participated as a field commander and surgeon. The Siege of Yorktown, Battle of Yorktown, or Surrender at Yorktown, the latter taking place on October 19, 1781, was a decisive victory by a combined force of American Continental Army led by General George Washington and French Army troops led by the Comte de Rochambeau over a British Army commanded by British lord and Lieutenant General Lord Cornwallis. The culmination of the Yorktown campaign, the siege proved to be the last major land battle of the American Revolutionary War in North America, as the surrender by Cornwallis and the capture of both him and his army prompted the British government to negotiate an end to the conflict.

The map offers splendid detail illustrating various ships engaged in battle, some of which are sinking, and includes positions and movements of the French, English, and American combatants. Key sites, including General Washington's Quarters, Rochambeau's Quarters, Knox's Quarters, Clinton's Quarters, Baron von Steuben's Quarters, and the locations of a number of French commanders, the positions of the various batteries and groups of armies are noted. Militias are even noted by state. A table in the upper left quadrant features a key presenting the precise positioning of British warships. Just to the right of the battlefield the Maison de Moore (House of Moore) is identified. It was here that the opposing commander met after the battle to draft the Articles of Capitulation surrendering York and Gloucester to the victorious Continental forces.

Drawn by David Ramsay and engraved by Charles Picquet for issue in the French edition of Histoire de la Revolution d'Amerique, Ramsey's account of the American Revolution. Ramsay would go on to be elected twice to the Continental Congress representing South Carolina.

David Ramsay (April 2, 1749 - May 8, 1815) was an American physician, public official, and historian from Charleston, South Carolina and is recognized as one of the first major historians of the American Revolution. Born In Lancaster County, Pennsylvania, Ramsay graduated from Princeton in 1765 and received a medical degree from the University of Pennsylvania in 1773. He settled in Charleston where he opened a medical practice. Ramsay served as a member of the South Carolina legislature from 1776 until 1783 and joined the South Carolina militia in 1780 as a field surgeon when the British threatened Charleston. After the fall of Charleston, Ramsay was imprisoned for nearly a year until he was exchanged. He then served as a member of the Continental Congress from 1782 until 1786, and served as its chairman from November 23, 1785 until May 12, 1786 due to the absence of John Hancock. In 1785 Ramsay published History of the Revolution in South Carolina in two volumes, which has the distinction of being the first book to receive a copyright in the United States. Ramsay also published a two-volume History of the American Revolution in 1789, Life of Washington in 1807, and a two volume History of South Carolina in 1809.


Charles Picquet (April 15, 1771 – January 15, 1827) was a French cartographer active in Paris during the Napoleonic and post-Napoleonic Eras. Picquet was born in Romagna-sous-Montfaucon, Meuse, France. From about 1798 Picquet supplied maps to the Dépôt de la Guerre. From 1806 he was appointed to Napoleon's Cabinet Topographique. Being politically dexterous, he was able to retain this position after the fall of Napoleon under both Louis XVIII and Charles X. Under Louis XVIII he also obtained the Brevet de Géographe Ordinaire du Cabinet Topographique. He worked with the cartographer Adrien-Hubert Brué on a major atlas project. When Charles Picquet died in 1827, his son, Pierre-Jacques Picquet, continued to publish under his father's imprint name well into the middle part of the 19th century.