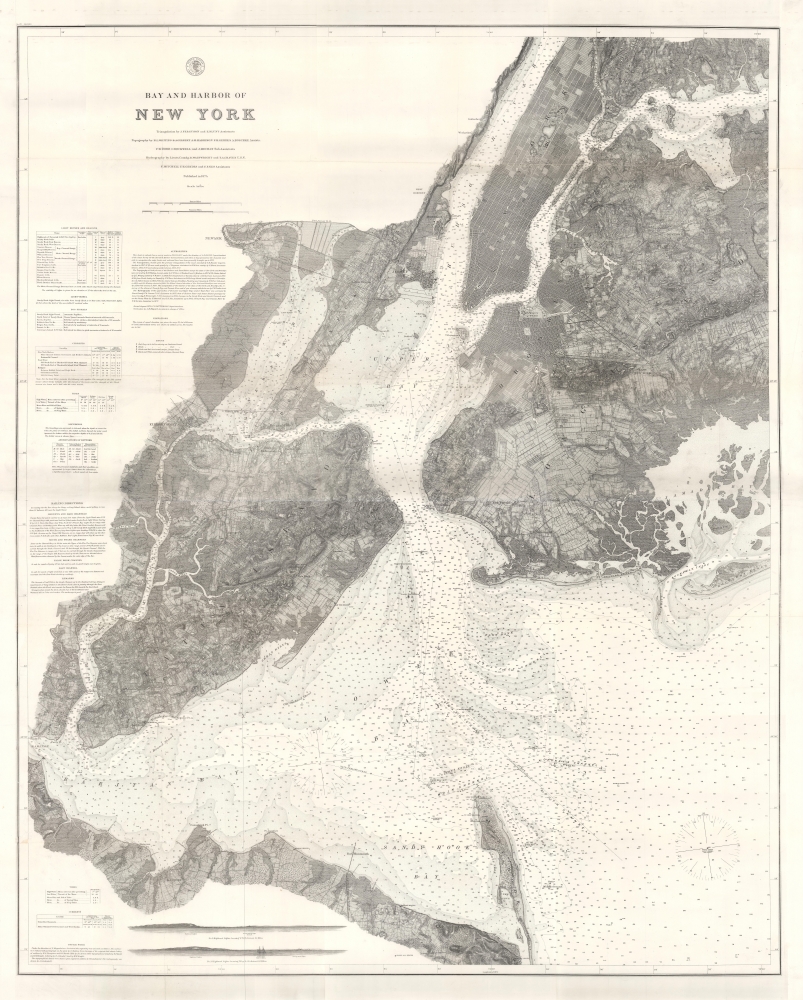 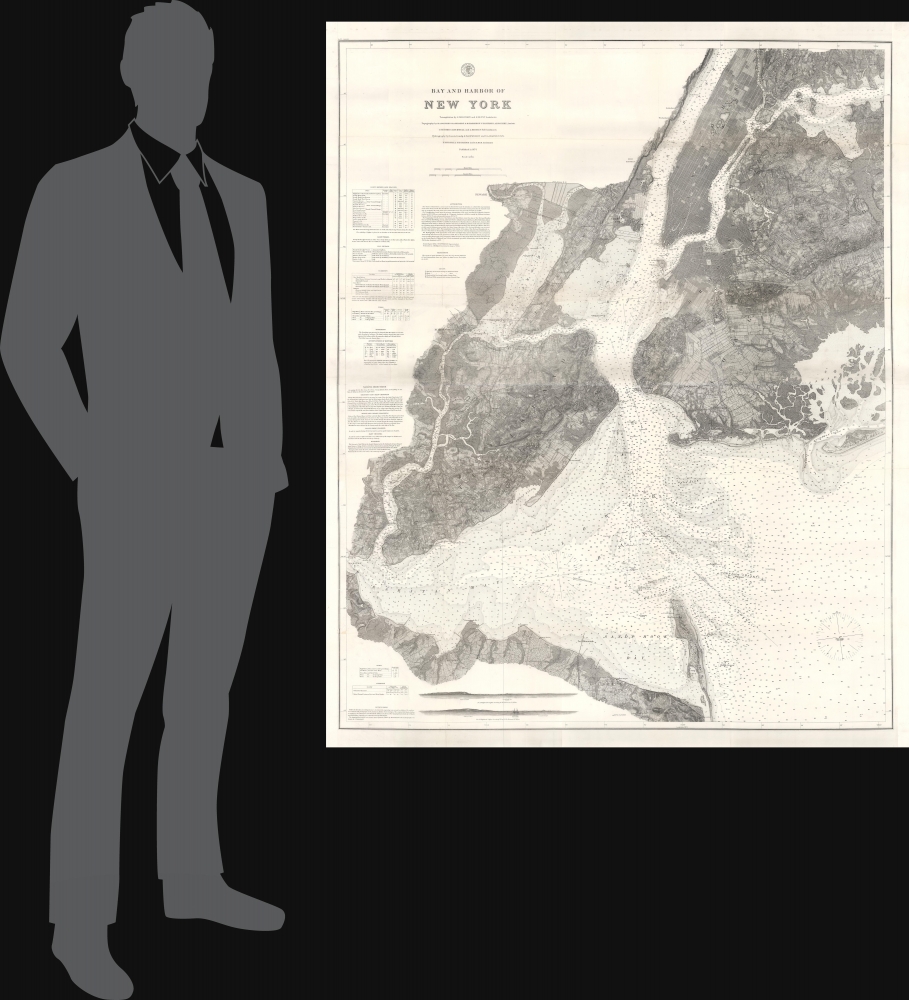 This 1874 double-sized nautical map of New York City represents the ultimate expression of the Coast Survey's work in and around New York harbor. Its refined detail provides not only state-of-the-art navigational information, but also a valuable record of land usage and development.

Developed blocks in Manhattan, Brooklyn, Jersey City, Hoboken, and Elizabeth are clearly indicated with, in some cases, individual buildings marked. Even so, large undeveloped stretches of rolling hills in Brooklyn and Queens stand in sharp contrast with today's sprawl. The coastal topography is well-detailed and hachured, with terrain indicated. And certainly, the chart is replete with practical navigational information, including depth soundings, harbor descriptions, and navigation guides to important channels. Tables detailing lighthouses and beacons, tides, and magnetic declination, are included as well.

The triangulation for this chart was prepared by J. Ferguson and E. Blunt. The topography by H. L. Whiting, S. A. Gilbert, A. M Harrison, F. W. Door, C. Rockwell, and J. M. E. Chan. The hydrography was accomplished by R. Wainwright and T. A. Craven. The entire production was supervised by A. D. Bache, Superintendent of the Survey of the Coast of the United States and one of the most influential American cartographers of the 19th century.


Edmund March Blunt (June 20, 1770 - 1862) was an American navigator, bookseller, chartmaker, and cartographer based in Newburyport, Massachusetts. Blunt was born in Portsmouth, New Hampshire in 1770. In 1796, along with the nominal assistance of prominent navigator Captain Lawrence Furlong, Blunt published The American Coast Pilot, one of the most important published works on American navigation. Although much of the work was plagiarized from British publications, the Coast Pilot was an immediate popular success. In response to the popularity of his work, Blunt published 21 subsequent editions, each with important updates and revisions. The first edition to contain map plates was printed in 1804. Following a fire that destroyed his offices at The Sign of the Bible in 1811, Blunt moved his business to New York and opened a new shop, The Sign of the Quadrant. His sons Edmund Jr. (1799 - 1866) and George William (1802 - 1878), joined the firm in 1824 and eventually took over the family business, renaming the firm 'E. and G. W. Blunt'. They both produced their own nautical books, charts, and instruments, as well as republished their father’s work. In 1830, Edmund accepted a position under Ferdinand Hassler at the United States Office of the Coast Survey. Much of Blunt's original work eventually found its way into U.S. Coast Survey Publications. George closed the firm in 1872 and sold the plates and chart copyrights to the U.S. Coast Survey and the U.S. Navy Hydrographic Office. Due to the quality and detail of Blunt's work, revised editions of his most important charts were republished well into the 1880s. Learn More...


Henry L. Whiting (1821-1897) worked for the United States Coast and Geodetic Survey for nearly 60 years, having joined in July of 1838. He began joining survey parties in 1842 and began a long and steady climb through the survey's hierarchy. By the 1850s he was acting as instructor in field surveys at the Naval Academy at Annapolis, and became Professor of Topographical Engineering in Massachusetts Institute of Technology. He proposed and executed he first systematic inspection of the survey's field work. He established many of the conventions in lettering and nomenclature which would be adopted by the survey going forward. His surveys included Florida; the Mississippi River; Provincetown Harbor and Boston Harbor; The Pacific coast from San Diego to Puget Sound; Portland, Maine; Providence Harbor in Rhode Island; and New York Harbor. With the outbreak of the Civil War, he was the first of the Survey then abroad to volunteer for service in Washington, and went on to make cooperative surveys with the Army throughout the war, in many cases surveying battlegrounds just after the close of action. Though born inland in Albany, New York, he was a lifelong resident of Martha’s Vineyard, and would regularly resurvey his home. He would in 1856 co-found the Martha’s Vineyard Agricultural Society. Learn More...

Report of the Superintendent of the U.S. Coast Survey, (New York) 1874.

Good. Joined and mounted on linen. Wear and toning along original fold lines. Else very good.