1749 Bruckner Map of the Bering Strait 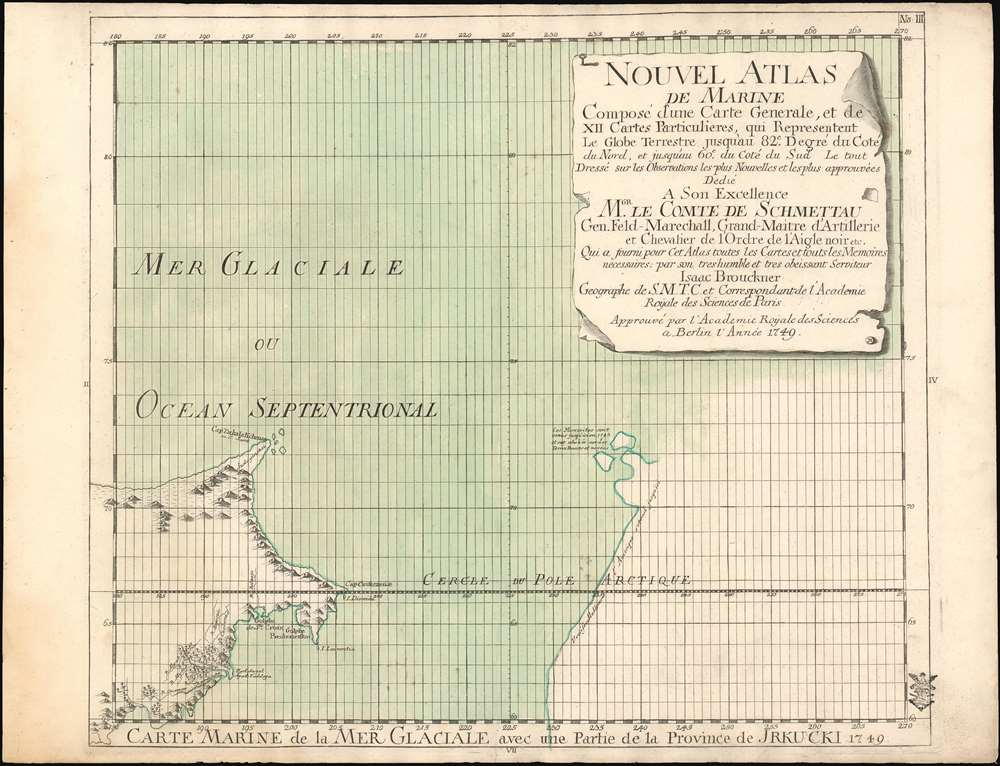 1749 Bruckner Map of the Bering Strait

State-of-the-Art Cartography of the 'Akademiya Nauk', published (instead) by the Berlin Royal Academy of Science

This is a rare 1749 map of the Bering Strait by Issak Bruckner (Issac Brouckner on the map). It is a remarkable and important artifact of 18th century cartography, illustrating the vectors by which secret cartographic data passed from the Russian Academy to the west, specifically to the Royal Academy of Sciences in Berlin under the auspices of Field Marshall Count Samuel von Schmettau, (to whom the map was dedicated). The map is one of twelve sheets executed by the Swiss instrument maker and geographer Bruckner, whose decade as Master of Instruments and globemaker for the Russian Academy of Sciences granted him astonishing access to the latest, secret Russian Naval maps of the northeast Russian coastline. Count von Schmettau opened the Royal Academy's archives to Bruckner, who would synthesize that information along with his own to produce the Nouvel Atlas de Marine, a meticulous twelve-sheet map of the world which Philips would hail as the first Prussian marine atlas. (Phillips, Atlases, 4146).

The Futility of Secrets

Bruckner was among those mapmakers who, invited to the Saint Petersburg Academy of Sciences, would exsanguinate that institution, transmitting as much Russian geographical knowledge to the west as they could. Like Joseph Nicolas De l'Isle - who was prompt to publish in Paris virtually everything he learned at the Academy - Bruckner's maps would reveal the Russians' knowledge of the Russian far east long before they published it. He had been appointed to the Academy as 'Instrument Master,' and as such produced a variety of sundials, surveying instruments, and globes. In order to produce a new sundial set (with an accompanying map) for presentation to the newly - enthroned Empress Elizabeth Petrovna, Bruckner had requested a new map; the Academy's Gerhard Friedrich Müller passed along to him maps that included the Russian Admiralty's 1746 mapping of Kamchatka, thus passing along Russia's most recent geographical information pertaining to the Bering Strait. The importance of this data as a state secret is apparent, in that it was actually erased from the map presented to the Empress - but it is certain that Bruckner made a copy, and incorporated that data in the map he produced in Berlin for Count von Schmettau.

Details of the Most Remote Russian Coast

The portion of the map dedicated to the American Northwest does not reflect the American discoveries of Bering or Chirikov, despite the notation dated 1743 at the northernmost extremity of an arbitrary American coastline. Bagrow (in his History of Russian Cartography up to 1800) infers from this that the information received by Bruckner from Müller pertained solely to Asia. That information, however, is strikingly granular. While the coastline north of the Arctic Circle hews close to Kirilov's depiction of the Russian Northeast coast, points south of Cap Czukczense are much more detailed. The Anadyr river is shown with half - a - dozen named tributaries. While the river is shown to exist on Kirilov's 1734 map, the detail available here makes apparent the new detail inadvertently exposed by Müller: the data may have been derived from Laptev's 1739-43 surveys of the Anadyr region. Diomede Island is named, though rather closely placed to the Russian mainland; a vestigial St. Lawrence Island appears as well.

This chart appeared in Brouckner's Nouvel Atlas de Marine, which was published in a single edition in 1749 by the Berlin Academie roÿale des sciences. The entire twelve-sheet volume is catalogued in only six institutional collections according to OCLC.

Isaak Bruckner (July 23 1686 - April 6 1762) was a Swiss buckle maker, stonecutter, machinist and mapmaker. The son of a pastor, he undertook a number of apprenticeships as a clasp and belt maker, a stone cutter and finally as a mechanic. He was accepted into the Basel guild for that trade in 1712. It was this line of work that eventually brought him instrument making, and eventually to mapmaking: In 1722 he constructed his first globe, developing it until 1725. He traveled to Paris in 1725 to present one of his beautiful gilt-copper globes to the Académie des sciences, which was well enough received for him to be appointed a corresponding member of the academy, and to be made a royal geographer to Louis XV. Leonhard Euler invited Bruckner to the Saint Petersburg Academy of Sciences in 1733. There, he taught mechanics and produced instruments and maps, including a sundial (on whose use he also published a pamphlet in 1735). He would leave the Academy in 1745, traveling throughout Europe. He produced his most impressive printed cartographic work in 1749 under the auspices of the Academy of Sciences in Berlin. In 1752 he returned to Basel, to lecture on geography, mechanics and geometry at the University of Basel. In 1754 and 1755 he and his colleague Daniel Bernoulli created a world map and a globe; iterations of the map appeared in Didot's encyclopedia and would be copied by various publishers. Learn More...


Samuel Graf von Schmettau (March 24, 1684 - August 18, 1751) was a Prussian Field Marshal and cartographer active in the first half of the 18th century. Schmettau was born in London at the Royal Prussian Amtskammerrat the Embassy of influential Hugueont stock. He joined the military at just 15, serving under various flags for various commanding officers, most of whom were his relatives. He saw battle on multiple occasions and rose quickly through the ranks, being made major in 1707 and lieutenant colonel in 1708, and field marshal lieutenant in 1733. In 1741 he was made Imperial Field Marshal, but transferred to the Prussian Army to become instead Prussian Field Marshal. In 1842 he received the Order of the Black Eagle. He was an excellent self-educated cartographer, producing his first map, a detailed survey of Sicily issued in 1723. A plan of Berlin followed in 1748, and a plan of Ostfriesland in 1751. Learn More...

Excellent condition. Prussian revenue stamp to lower right corner, as is evident on all known examples.