1800 Stockdale Map or Plan of the City of Berlin, Germany 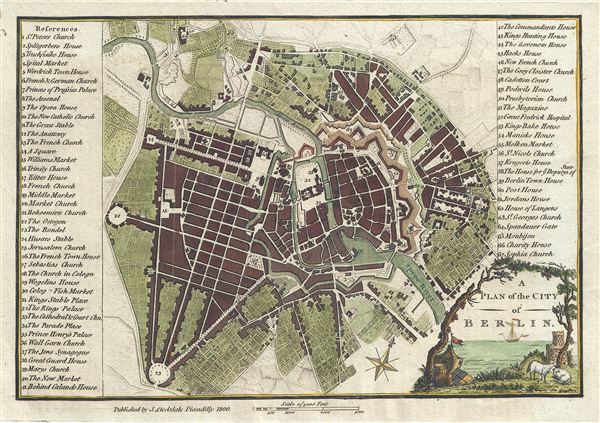 1800 Stockdale Map or Plan of the City of Berlin, Germany

This is an appealing 1800 map or city plan of Berlin, Germany, issued by John Stockdale. It beautifully depicts the capital city of the Kingdom of Prussia at the end of the 18th century. The map is exceptionally detailed, noting churches, streets, gates, fortifications, rivers and a host of additional topographical features.

At the time, Prussia and the German states were undergoing a cultural revolution along with the rest of Europe. Celebrities from across the continent would be seen in the city streets, among them famous Germans such as Johann Gottfried von Herder, Johann Wolfgang von Goethe, Friedrich Schiller and Joseph Haydn. Berlin became a center of the 'Age of Enlightenment' for the German intellectual elite who were increasingly leading European intellectual thought, reshaping popular culture. It would also benefit enormously from the Industrial Revolution.

This map was published by John Stockdale in 1800.