1868 Laurie and Findlay Nautical Chart and Map of Bermuda 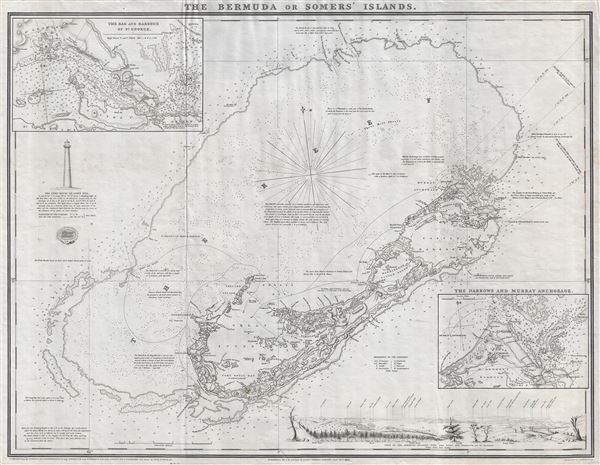 1868 Laurie and Findlay Nautical Chart and Map of Bermuda

Very rare map of Bermuda, the most sophisticated in its day..

A scarce and important map of Bermuda issued in 1868 by Alexander Findlay. Based upon the model laid down by C. Lempriere and Robert Sayer in 1775, this map details the island of Bermuda and its surrounding reefs. Laurie acquired Sayer's stock in in 1794 and subsequently began reissuing the map in various updated formats. The present fully re-engraved map is vastly more sophisticated than the original 1775 chart due to later surveys by Captains T. Hurd, E. Barnett, and J. Evans. The present map details the reefs in particular with extraordinary detail and ads two large insets, one in the upper right focusing on the 'Bar and Harbour of St. George' and another in the lower right detailing the 'Narrows and Murray Anchorage.' Findlay has also added a dramatic view in the lower right quadrant illustrating vicinity of St. George. There are also considerable advances with regard to island topography, countless additional soundings, and navigational annotations.

Findlay prepared this map to accompany his pilot book entitled A Description of the Bermuda or Somers' Islands, with nautical directions to accompany the Chart, this being the 'chart' in question. The first edition of Findlay's pilot book appeared in 1847 and this map appeared with it. The only known surviving example of this edition is held in the repository of the British Library. The present example is a later edition updated to reflect new survey's and discoveries in the middle part of the 19th century. In its day, this was the finest and most sophisticated nautical chart of Bermuda available and would have been invaluable to anyone involved in the transatlantic trade with England.

Findlay, A., A Description of the Bermuda or Somer's Islands, with Nautical Directions to Accompany the Chart, (London: Laurie) 1868.

Very good. Some creasing. Else clean.