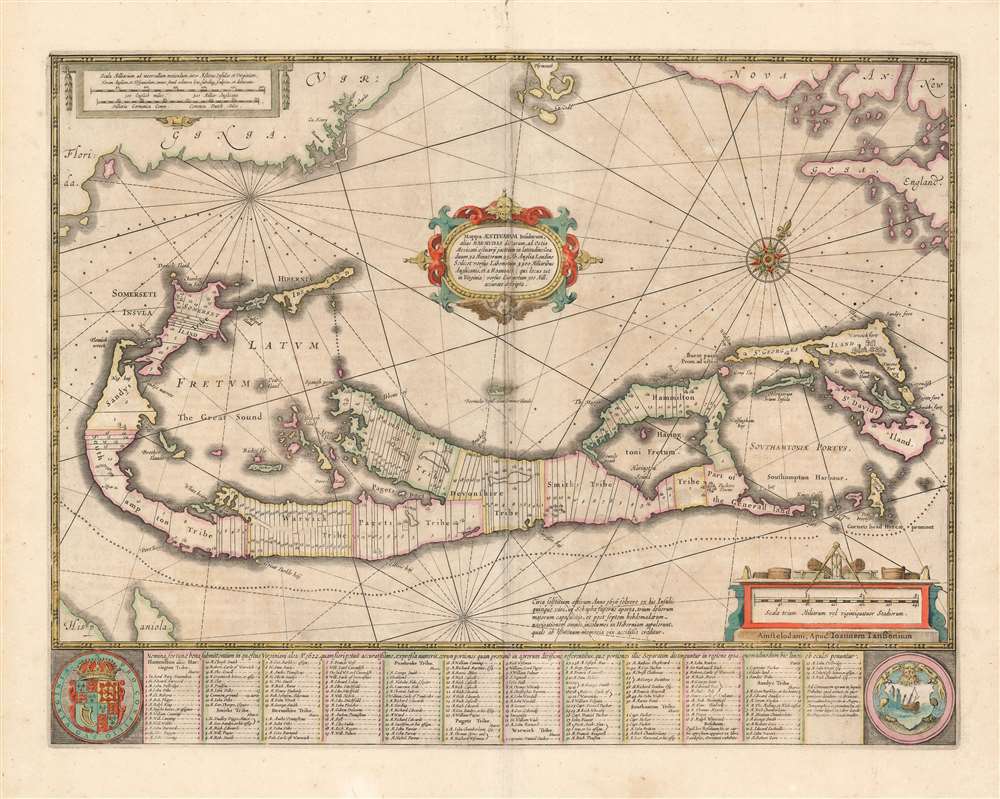 Hondius Design Genius - two maps, at different scales, superimposed upon one another.

This is a classic 17th-century map Dutch of Bermuda, printed by Jan Jansson in 1654 and here in an original color example from the collection of the illustrious map collector, dealer, and scholar Kenneth Nebenzahl. Actually engraved by Jansson's brother-in-law Henricus Hondius, this map was based on Richard Norwood’s chart produced in 1618 for the Bermuda Company. Norwood's chart provides the primary depiction of the island available for that century. Versions of this map were printed by John Speed as well as Hondius' and Jansson's competitor, Willem Blaeu.

Two Maps in One

In a brilliant moment of inspired design, Hondius superimposed two maps, at different scales, on one another. The most prominent map is a detail of Bermuda. The other a more expansive map intended to illustrate Bermuda's location relative to known landmasses.

Dominating the image is a map of the Bermuda Islands, showing the parishes and tribes allotted to the Bermuda Company’s shareholders with their names included, most of which survive as place names to this day. The map illustrates the island's treacherous coastlines with crosses signifying wrecks peppering the surrounding waters. At the bottom, flanked by the Royal Arms of Great Britain and the arms of Bermuda, are a list of the members of the Company with numbers keying them to the map.

The observant reader of the map will note a second, smaller depiction of Bermuda, placed to show the island's position with respect to the North American coastline: near the borders of the map are the easily recognizable coasts of Cape Cod, Nova Scotia, and Virginia. Many later copyists did not understand this design, depicting the island(s) without the context of the mainland in their maps thus showing the smaller 'Bermuda', as a small island off the coast of... Bermuda.

Richard Norwood came to Bermuda at the behest of the Bermuda Company, but the notion was not for him to survey the place. Norwood had devised a sort of diving bell, and earlier succeeded in retrieving a cannon from Lymington Harbor, England. The Company hoped to employ Norwood's device to harvest pearls from the oyster beds they believed surrounded the islands. When a wealth of pearls failed to materialize, the Company instead reassigned Norwood to survey the islands. He executed several surveys between 1614 and 1617, resulting ultimately in this map.

This map was engraved by Henry Hondius in 1633, and it would remain in the Hondius/Janssonius atlases throughout their publication history. This example of the second state (with Jansson's imprint) appeared in the 1654 Atlas Novus. Different editions of this map appear in various collections; the Jansson imprint is cataloged only by Boston Public Library.

Henricus Hondius II (1597 – August 16, 1651) was a Dutch engraver, cartographer and publisher. The son of the cartographer Jodocus Hondius, Henricus took over the business after father died in 1612, co-ran the business with his brother Jodocus II. In 1628 Henricus partnered with Jan Janssonius and together they continued the business, with Jansson’s name appearing on the Atlasas co-publisher after 1633. Eventually, about 50 editions of the Atlas were released in the main European languages. In the Islamic world, the atlas was partially translated by the Turkish scholar Katip Çelebi. The series is sometimes called the 'Mercator/Hondius/Jansson' series because of Jansson's later contributions. Learn More...