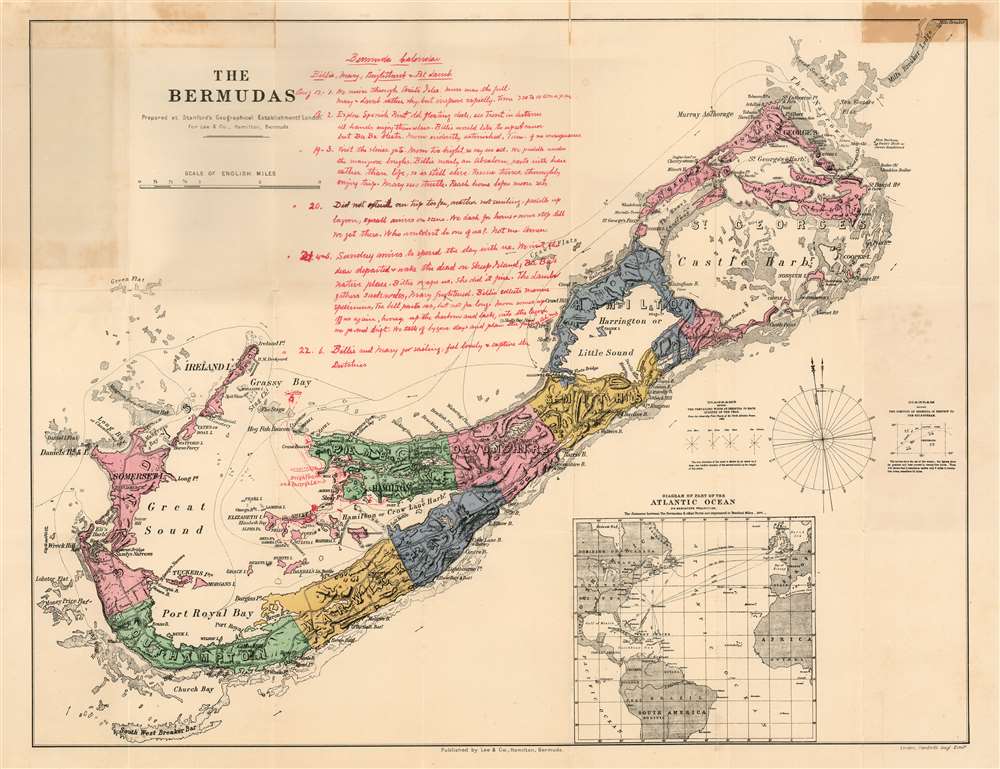 This is Stanford's map of Bermuda, printed in London on behalf of Bermuda publisher Donald M. Lee.

A Pleasant Summer's Week in Bermuda

The map has been charmingly annotated. It bears, in red manuscript by an a 'Bermuda Calendar' memorializing highlights of a six-day visit to Pembroke Parish by 'Billie, Mary, Brightbank + Pet Lamb.' The unnamed author was English, Canadian, or possibly South African, favoring British spellings e.g., 'harbour.' He was a Shakespeare aficionado 'We cruise through Ariel's Isles...' and prone to referencing the Bible 'We paddle under the mangrove boughs. Billie nearly an Absalom, parts with hair rather than life, so is still alive.)' Our correspondent - perhaps the young patriarch of the family - seems to have been reveling in his good fortune: 'Who wouldn't be one of us? Not me. Amen.'

The 'calendar' events are dated between August 17 and August 22. The author obligingly indicates the 21st to be a Sunday, and refers to the lunar phase on the 17th through the 19th. While we date the map itself to approximately 1880, we are able to correlate the calendar dates and the lunar phases to confidently date the manuscript to 1921. The purpose of the trip might not have been all revelry: the entry for Sunday August 21 notes, 'We visit the dear departed + wake the dead on Sheep Island.' Sheep Island is now known as Long Island. Though not shown on this map, Long Island contains military cemeteries used by the British Army and Royal Navy until the middle of the 19th century. A separate 1902 graveyard was also established there for Boer War prisoners of war who died in Bermuda. Was the 'dear departed' a British military forbear? A Boer far from home? The writer does not say.

In he same red ink used in the calendar manuscript, the writer has included the tracks of his party's travels. They are numbered to correspond to the entries in the calendar, so we can see the tracks of the return journeys, all of which were based on the peninsula between Mill Creek (named Mangrove Creek on the map) and Fairyland Creek. Named in manuscript (and misspelled with an extra 's') is Grassmere - that is, Hotel Grasmere By-The-Sea. A private home with accommodations for wealthy travelers, Hotel Grasmere was in operation as far back as the 1890s. At the time of this visit, the proprietor would have been N.E. Lusher (incidentally one of the island’s earliest and most enterprising photographers.) Similarly marked on the map is 'Brightbank and Mary's Lamb' - perhaps the pet lamb accompanying our travelers was a denizen there?

The map is attractively composed, showing topography with hachure, shallows with delicate shading, and hand color distinguishing the parishes from one another. The map Shows churches, naval and army stations and hospitals, admiralty offices, and roads. The causeway linking Hamilton Parish with St. George's Island is shown; this was completed September 19, 1871. St. David's lighthouse is shown though not named: construction on it began in 1876 and was completed in 1879. Gibbs Hill Lighthouse is shown and named: it had been in operation since 1844. The map includes diagrams of the prevailing seasonal winds, derived from Admiralty charts dated 1868. A compass rose shows the magnetic variation. An inset map of the Atlantic Ocean shows Bermuda's location in context, along with the distances by steamship from the island to North American, Caribbean, and European ports. The inset also shows the location of the Transatlantic Cables.

Printed in London for Bermuda Publication

Though Lee was 'King's Printer' in Bermuda, his operation in Hamilton was necessarily small scale. He produced the government newspaper The Royal Gazette, as well as his stationery business and annual almanac were all published from the building where he lived with his family; the newspaper was typically a weekly four-page affair, printed on a manual press by candlelight: the infrastructure for the production of a lithographed map of this quality was not available on the island; hence the collaboration with the venerable London firm of Stanford's.

The map is rare. We see only one example with the 'Lee and Co.' imprint listed in OCLC at Princeton. Four others, with the imprint of 'Gregory V. Lee' appear in institutional collections. We have not seen this map on the market. Naturally, the addition of the map's delightful manuscript makes this a unique artifact.


Donald McPhee Lee (February 11, 1804 - February 11, 1883) was a Canadian-born Bermudan publisher and newspaperman, the first editor of Bermuda's The Royal Gazette, He learned the printing trade in St. John's, Newfoundland. His father, who had served with the British military in Bermuda, learned of a vacancy for King's Printer there and submitted his son's name for consideration. In addition to the printing of official government documents, his duties included the publishing and editing of Bermuda's government newspaper, the Royal Gazette. He held this position for fifty five years, until his death. Lee also ran a stationery story and published an annual almanac. His second eldest son Gregory Vose Lee (May 5 1841 - February 28, 1898) took over as editor and remained in the position until his death in 1898, when the newspaper’s connection with the Lee family ended. His tenure almost did not evern begin: on his way to Bermuda from Halifax in 1827, he ran into stormy waters three days into the journey and was lost at sea for 11 weeks. Given up for dead, his brother David Ross Lee put out the first two editions of the newspaper before he finally arrived in St. George’s in January 1828, his family was overjoyed by his miraculous survival. Lee's tale - which would not be published until after his death - told of a captain who went blind, a navigator who was illiterate, and two crewmen who were washed overboard by a wave and back onto the boat. Learn More...