1854 Pharoah Map of the Beed or Bhir District of Maharashtra, India 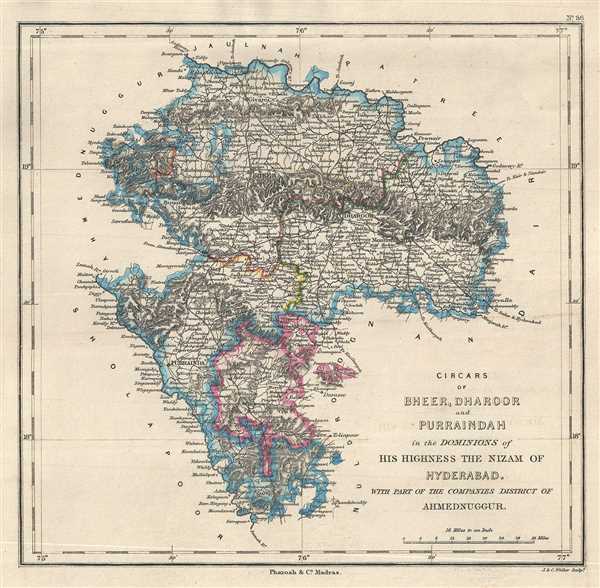 1854 Pharoah Map of the Beed or Bhir District of Maharashtra, India

Map of the Bir District of Maharashtra under the Nizam of Hyderabad.

This is an 1854 map of the Beed or Bir district of Maharashtra, India depicting the region under the dominion of the Nizam of Hyderabad. The map covers the district along with part of the district of Osmanabad and the Ahmednagar district under the East India Company. The towns of Beed, Dharur and Paranda are noted. The map also notes important towns, rivers, roads, and topography.

Circars or Sarkars were historical division of a province used in the Mughal states of India. The regions of Beed, Dharoor and Purraindah were part of the princely state of Hyderabad from 1724 to 1948, until the Nizam was overthrown by the Indian Armed Forces following its independence.

This map was engraved by J. and C. Walker and issued as plate no. 36 by Pharoah and Company in their 1854 Atlas of Southern India.