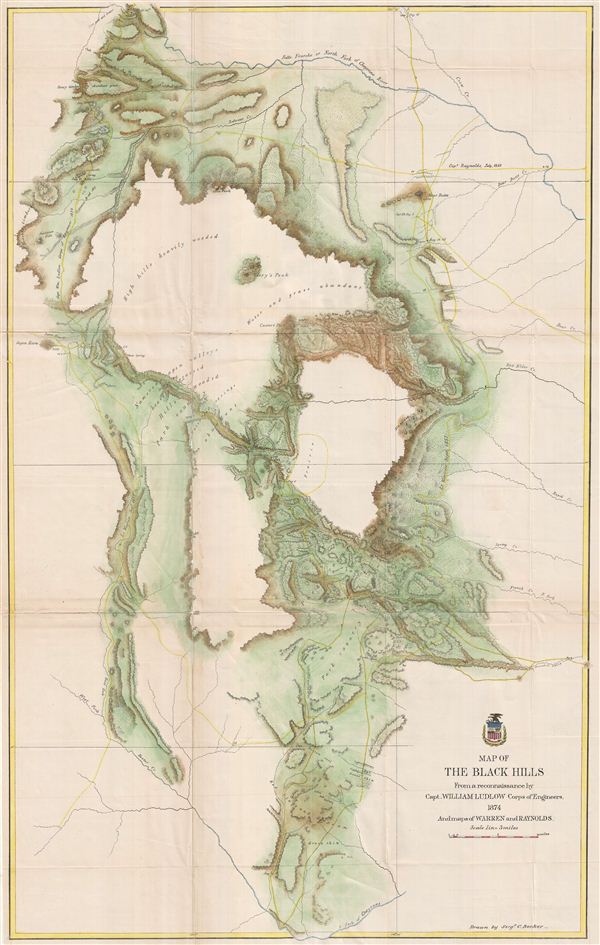 The map that precipitated the slaughter of Col. Custer at Little Big Horn.

George Armstrong Custer and William Ludlow's seminal 1874 map of the Black Hills, Dakota Territory, covering from the Missouri to the Powder River and from the 47th to the 43rd parallel. In 1874 one thousand cavalrymen under the command of Lt. Col. George Armstrong Custer moved into the Black Hills region of Dakota Territory. Though officially American Indian territory according to the 1868 Treaty of Laramie, rumors had been circulating since the early 19th century that this region harbored rich deposits of gold. Custer and his men were sent to investigate. With Custer was William Ludlow, an officer of the Army Corps of engineers (inheritor of the legacy left by the Topographical engineers) whose commission was to explore and survey the region, identifying in the process if the rumored gold did indeed exist.

As a whole this map is full of fascinating detail. Throughout Ludlow offers commentary on the territory such as 'High hills heavily timbered Water and grass abundant,' 'grass and water good,' 'bad lands' and 'soil and loose dry clay.'

Ultimately, Custer and his men did find gold in the Black Hills, leading to the 1876 Black Hills Gold Rush. Completely disregarding the Treaty of Laramie, gold hungry settlers rushed into the region, coming into immediate conflict with the warlike Sioux, setting the stage for the Great Sioux War of 1876. Custer's foolish attack on the Sioux encampment and the subsequent massacre at Little Big Horn were a direct result of this conflict. Ultimately the Black Hills gold discovery turned out to be one of the greatest gold strikes in history, producing 10% of the world's gold supply for the next 125 years.

William Ludlow (November 27, 1843, - August 30, 1901) was an officer in the Corps of Engineers and a major general in the United States Army who served in the American Civil War, the Plains Indian Campaigns, the Spanish-American War, and led a scientific expedition examining the natural wonders of Yellowstone National Park. Ludlow was born in Islip, Long Island, and attended both the City University of New York and the United States Military Academy at West Point. Ludlow excelled at engineering and science and, upon graduation, was immediately assigned to the Army Corps of Engineers. During the American Civil War he served on the staff of General Sherman and participated in both Sherman's March and the Carolina Campaign. Following the Civil War, Ludlow was ordered to the staff of Lt. Col. George Armstrong Custer, who had been dispatched to the Black Hills of Dakota to search for gold. Unlike Custer, Ludlow survived the Black Hills and went on to a distinguished military career, serving in Cuba and in the Philippines before taking an honorable retirement. Ludlow retired to Convent, New Jersey, where he died at 56. He is buried in Arlington National Cemetery.

Wheat, Carl Irving, Mapping of the Transmississippi West, 1540-1861, 1248. Realms of Gold: A Catalogue of Maps in the Library of the American Philsosphical Society, 1393.
Looking for a high-resolution scan of this?