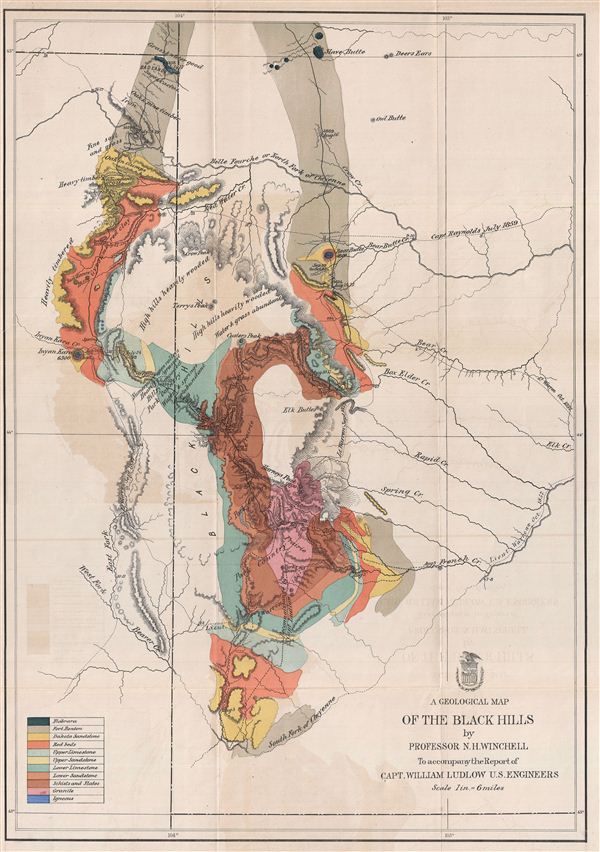 The map that precipitated the slaughter of Col. Custer at Little Big Horn.

This is a rare example of the 1875 geological map of the Black Hills, South Dakota prepared for the official report on the Custer expedition of 1874. Centered on Harney's Peak, the highest point in the Black Hills, the map covers from Slave Butte to the South Fork of Cheyenne River. Various mountain peaks, wooded areas, creeks, prairies, and other topographical details are also noted. encompassing the Black Hill National Forest, the Black Hills are famous for being home to the Mount Rushmore National Memorial, Custer State Park, Crazy Horse Memorial and other attractions. The routes of Lt. Warren, 1857, Capt. Reynolds, 1859, and the route taken for reconnaissance by Capt. Ludlow, 1857, are marked.

Captain William Ludlow, accompanied by Prof. N. H. Winchell (State Geologist of Minnesota) and Mr. George Bird Grinnell, penetrated the region in 1874, attached to the Seventh Cavalry under command of Lieutenant Colonel George Armstrong Custer as part of the United States Army expedition to explore the uncharted Black Hills and South Dakota in order to identify a suitable site for a fort, explore the possibility of gold mining in the region, and find a route to the southwest. Together they produced the rare Report of Reconnaissance of the Black Hills of Dakota, made in the summer of 1874, which essentially opened up the Dakota Territory. The land was originally promised to the Sioux Indians, who considered it sacred, but after the discovery of gold during this expedition, thousands of miners flooded into the region setting the stage for the Great Sioux War of 1876. Two years after this map was made, the Sioux Indians would kill Colonel Custer in the ill-fated battle of the Little Big Horn.

William Ludlow (November 27, 1843, - August 30, 1901) was an officer in the Corps of Engineers and a major general in the United States Army who served in the American Civil War, the Plains Indian Campaigns, the Spanish-American War, and led a scientific expedition examining the natural wonders of Yellowstone National Park. Ludlow was born in Islip, Long Island, and attended both the City University of New York and the United States Military Academy at West Point. Ludlow excelled at engineering and science and, upon graduation, was immediately assigned to the Army Corps of Engineers. During the American Civil War he served on the staff of General Sherman and participated in both Sherman's March and the Carolina Campaign. Following the Civil War, Ludlow was ordered to the staff of Lt. Col. George Armstrong Custer, who had been dispatched to the Black Hills of Dakota to search for gold. Unlike Custer, Ludlow survived the Black Hills and went on to a distinguished military career, serving in Cuba and in the Philippines before taking an honorable retirement. Ludlow retired to Convent, New Jersey, where he died at 56. He is buried in Arlington National Cemetery. Learn More...