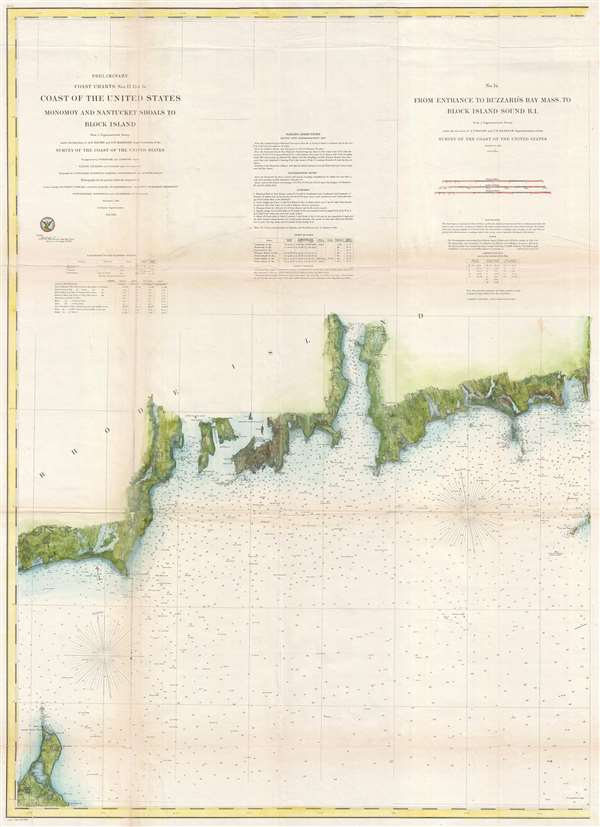 Includes sailing directions for Narragansett Bay and the Saughkonnet River!

This is a scarce example of the 1860 U.S. Coast Survey nautical chart or maritime map of the Rhode Island coastline. The map depicts the coastline from Perrysville, Point Judith Pond, Naragansett Bay to Mishaum Point and from a distance inland along the Saughkonnet River to Block Island. One sheet of a three sheet series, this example is beautifully colored and incredibly detailed. Individual buildings and are illustrated throughout, including in Newport. Individual farms are illustrated, with their boundaries lightly indicated. Myriad depth soundings are present, with a denser concentration closer to the coastline and in the Saughkonnet River.

Above the depiction of the coastline, sailing directions for mariners bound into Narragansett Bay or the Saughkonnet River are located in the center. A list of hazards is also included, along with a table indicating the location of light houses and notes on light vessels in the area. To the right of center, the title of this chart, along with a table explaining the abbreviations used on the map are situated, while the title of the series, information concerning its compilation, and a tide table are located to the left of center.

This map was compiled under the direction of A. D. Bache, Superintendent of the Survey of the Coast of the United States and one of the most influential American cartographers of the 19th century.

Very good. Wear and toning along original fold lines. Verso repair to lower left corner. Backed on archival tissue for stability. Blank on verso.
Looking for a high-resolution scan of this?