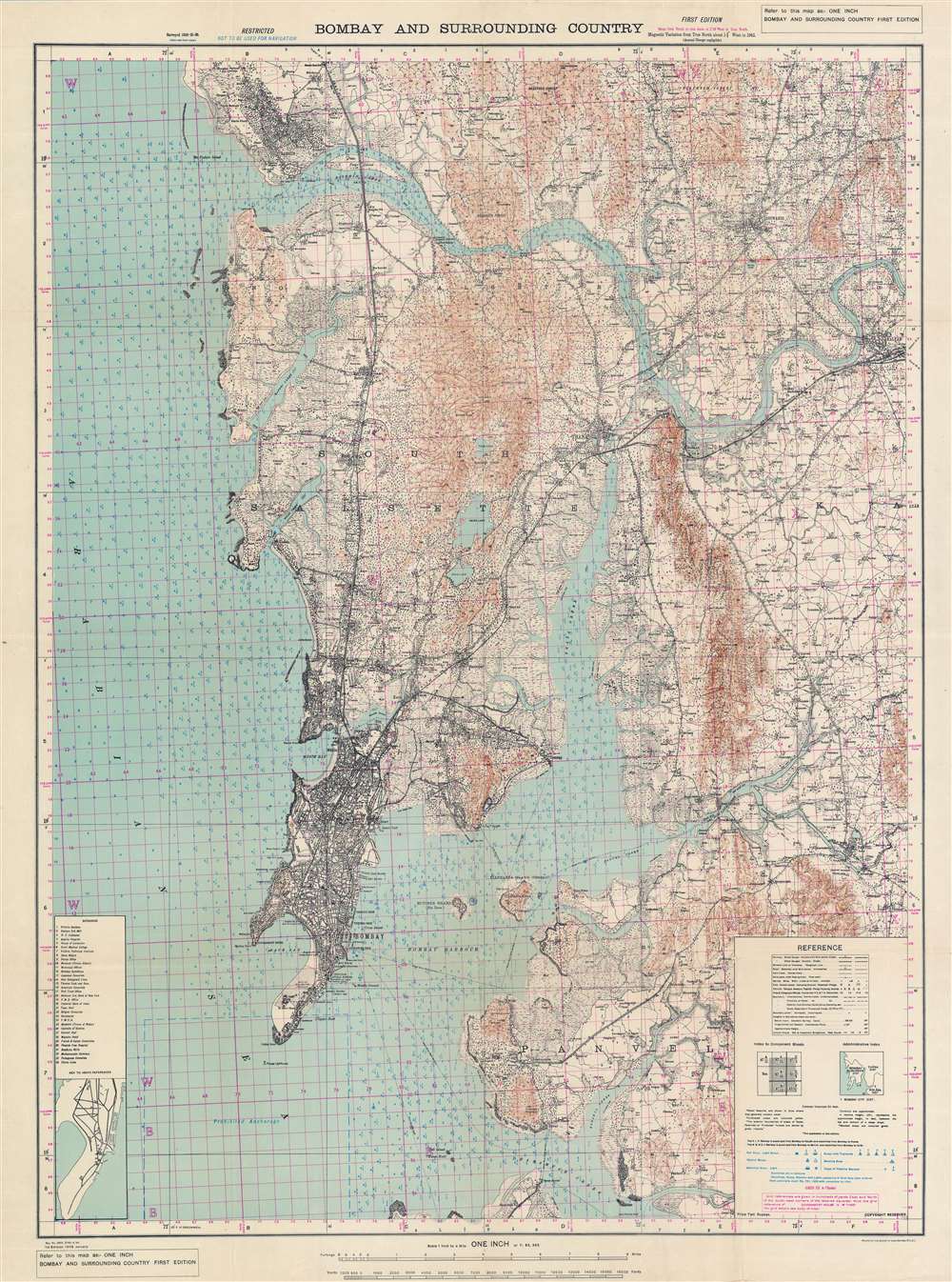 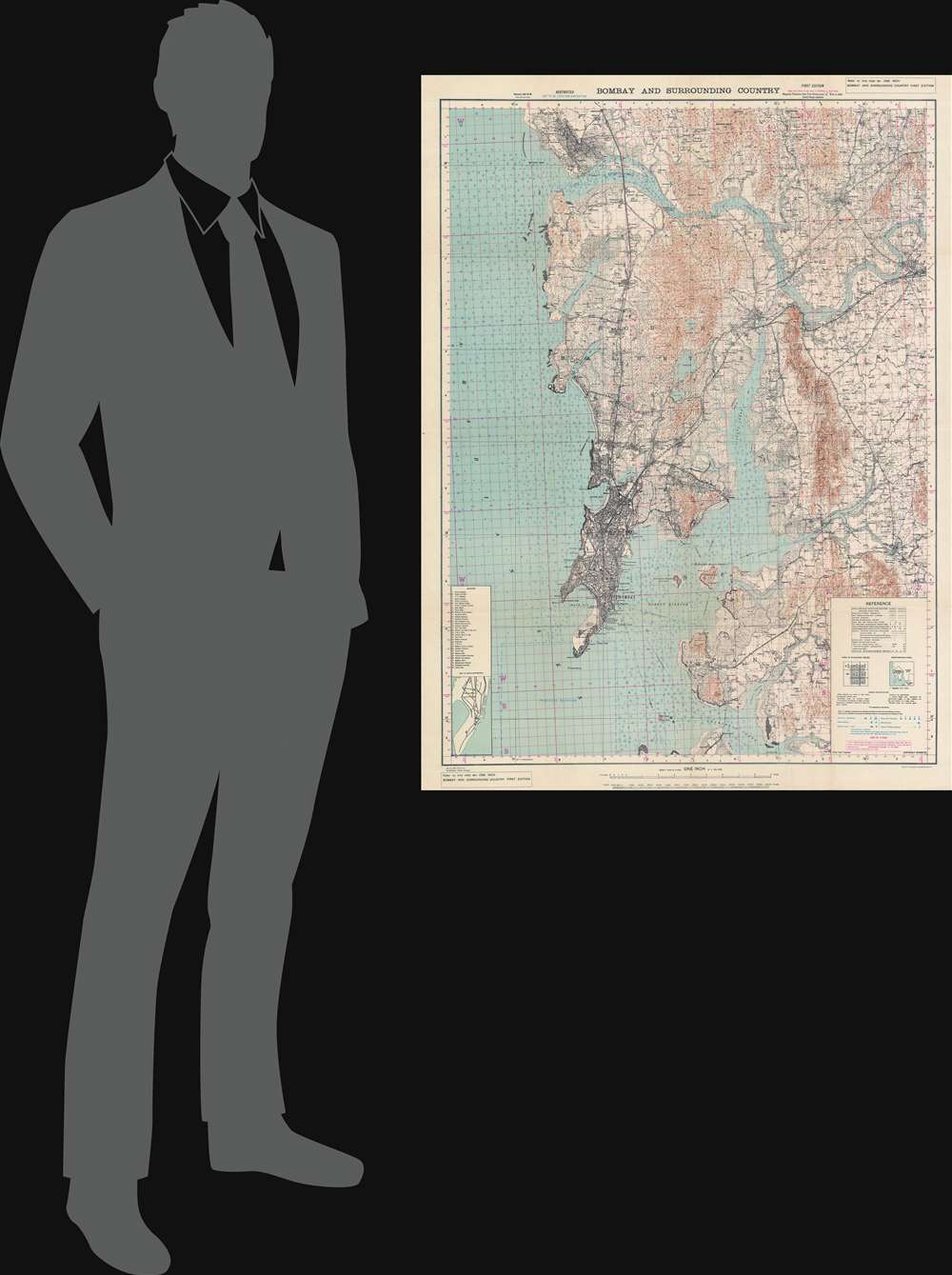 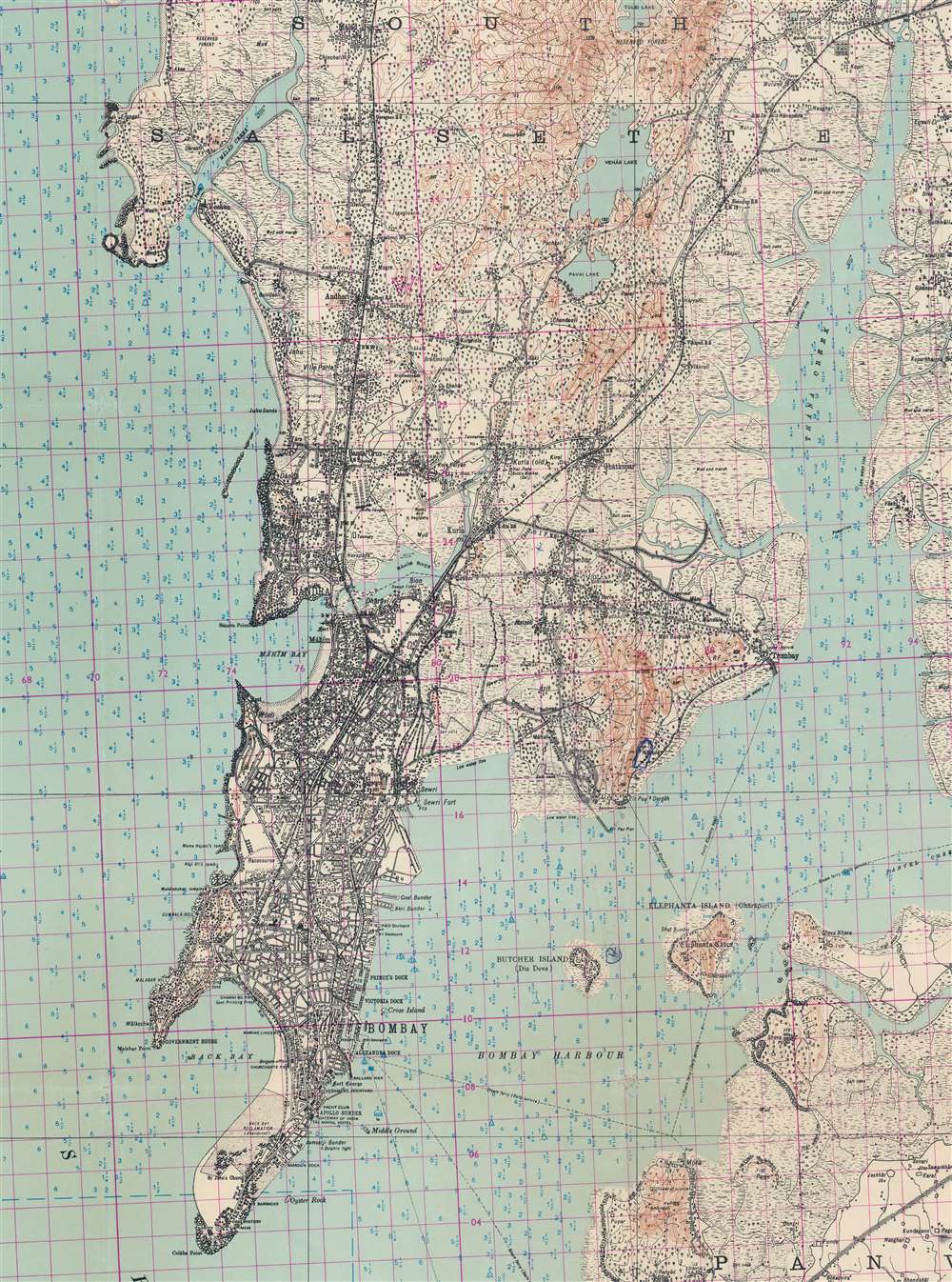 This is a rare 1946 first edition map of Bombay / Mumbai issued by the Survey of India just days before the Royal Indian Navy Mutiny (February 18 - 15, 1946). The map features manuscript annotations near Butcher Island (Dia Deva) in Bombay Harbor - a major focus of the mutiny as the Bombay Presidency’s entire ammunition hold, including telephone and wireless equipment, was stored there. The map is large and meticulously detailed, noting individual buildings, streets, railroads, topography, depth soundings, and more - without a doubt, the finest map of Bombay then obtainable.

Also known as the 1946 Naval Uprising, the Royal Indian Navy Mutiny was a revolt of Indian naval personnel, soldiers, police, and civilians against British authority in India. The revolt followed closely on the heels of World War II (1939 - 1945), wherein the British leveraged the population of India to rapidly expand the Royal Indian Navy (RIN). By 1945, the RIN was ten times larger than it was in 1939. The RIN played a significant role in controlling Japanese aggression in the Indian Ocean. Following the Japanese surrender on September 2, 1945, the British began demobilizing the RIN, leading to angry sailors, poor pay, and deplorable interim living conditions as thousands of Indian sailors disembarked in Bombay - the primary demobilizing staging area.The revolt began when more than 1000 sailors on the HMIS Talwar declared a strike. The strike demanded immediate Indian independence, and they renamed themselves the Indian National Army (INN). The revolutionaries first took control of Butcher Island, with its arsenal and radio equipment, then moved on to attack Castle Barracks and Fort Barracks in Bombay. The Butcher Island radio and wireless system was used to spread word of the rebellion quickly, expanding it to military establishments in Karachi, Madras, Vishakhapatnam, Calcutta, Delhi, Cochin, Jamnagar, and Andaman’s Islands, even reaching as far as Bahrain and Aden. While initially peaceful, the revolt quickly turned violent on both sides, although most of the casualties were Indian.The revolt had little support from India's national leaders. Mahātmā Gandhi (1869 - 1948), a pacifist, openly condemned it. Without internal leadership and national support, and overwhelmed by superior British firepower, the revolt ultimately surrendered on the contingency that none of the mutineers would be persecuted - they were anyway. The revolt, although materially a failure, is generally regarded as a major episode in the Indian Independence Movement. India and Pakistan achieved independence one year later on July 18, 1947.

This map was printed in Dehradun by the Survey of India Offices base on survey work completed between 1924 and 1926. The present example is the first edition, issued in January 1946. The map is printed in 4 colors with pink overprinting breaking the map into 10,000 square yard grids. This map is rare. We note but 3 other examples, those being located in the British Library, St. Pancras, the University of Oxford, and the University of Ottawa.