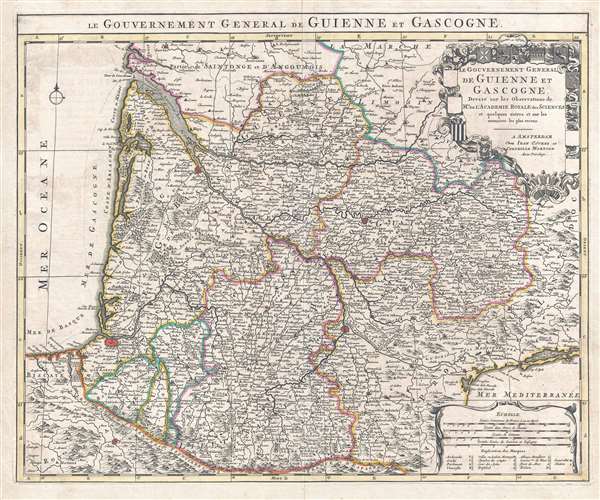 This is a fascinating 1742 map of the modern French departments of Gironde, Gascony (Gascogne), and Guyenne. This coastal region is the seat of the Bordeaux wine region and produces many of the world's finest reds. The map depicts the region from the Bay of Biscay to the western Languedoc region and from Limoges and Angouleme to the French-Spanish border. Numerous vineyards and chateaux are illustrated, along with myriad cities, towns and villages, such as Bordeaux, Bayonne, Toulouse, Carcassonne, and Narbonne in France and Pamplona in Spain. The neighboring district of Gascony, home to Armagnac, is also depicted in detail. An elaborate title cartouche is situated in the upper right corner bearing various armorial crests specific to the region.

This map was originally drawn by the prominent French cartographer Guillaume Delisle (De L'Isle). The plates from Delisle's atlas were later acquired by the Amsterdam publishing house of Covens and Mortier, who reissued his maps with dramatic Dutch style colorwork. The present map came from the 1742 Covens and Mortier Amsterdam edition of Delisle's Atlas Nouveau.