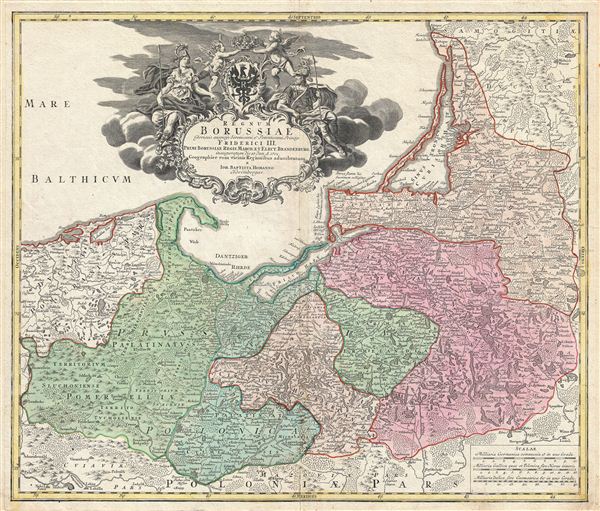 A stunning c. 1710 map of the Baltic coast consisting of northern Poland (Borussiae), Konigsburg (Kaliningrad), and parts of Lithuania, by the Nurmburg cartographer J. B. Homann. The map covers from German Pomerania eastward to Lithuania and Belarus and from the Baltic Sea to Torun (Thorn). Includes the major cities of Gdansk (Dantzig), elblag (elbing), Malbork (Marienburg), Lidzbark Warminski (Hielsberg), Koningsberg (modern day Russia), and Chelmno (Culm). Mountains and forests are rendered in profile following Homann's typical stylistic conventions. An elaborate decorative cartouche bearing numerous allegorical elements fills the Baltic Sea, top center. The cartouche celebrates the Konigsberg assentation of Frederick III of Brandenburg, who crowned himself King of Prussia on January 18, 1701. While Frederick, now the Frederick I of Prussia, had an uneventful reign, his Grandson, Frederick the Great would eventually consolidate this region into Brandenburg-Prussia. This area was returned to a reconstituted Poland by the Treaty of Versailles following World War II. The map was engraved by J. B. Homann and printed in Nuremburg, Germany.