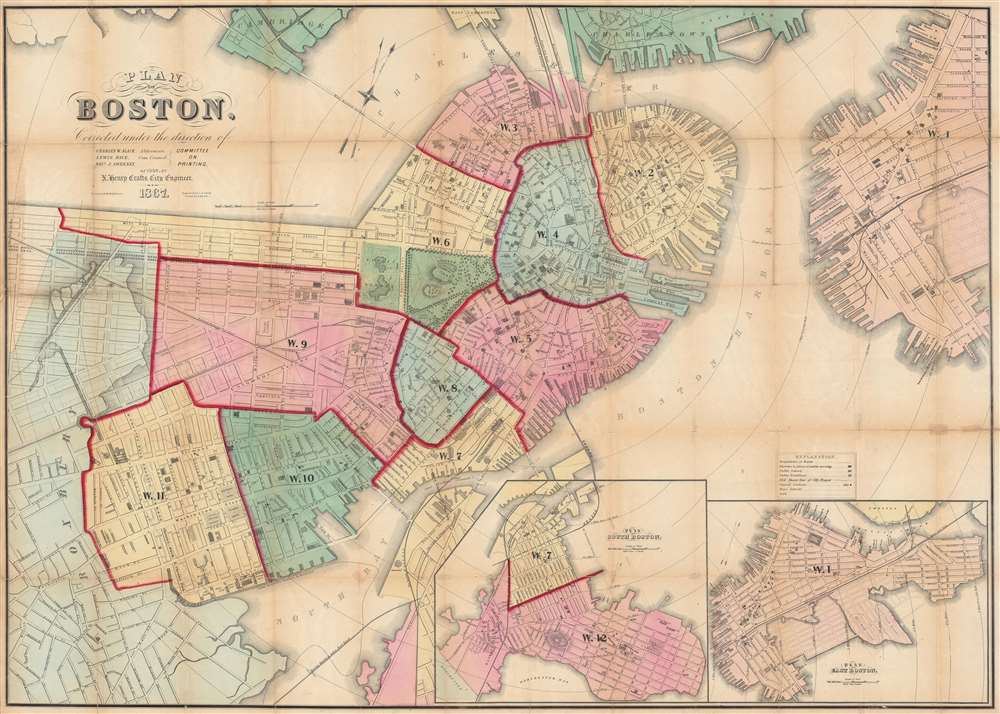 An 1867 city map of Boston produced for the Boston City Engineer's Office. This map, updated regularly and based upon official engineering records, represents the finest mapping of Boston between 1860 and 1870 - Boston's most vibrant period of expansion, landfill development, urbanization, and modernization.

City wards are color coded. Streets are labeled throughout, with important buildings, such as City Hall, the Court House, and the Athenaeum, illustrated. Both Boston Common and the Public Gardens are depicted in detail with footpaths appearing as parallel dotted lines. Insets of South Boston and East Boston occupy the lower right.

A New Series of Maps of Boston

Nancy S. Seashoales in her book, Gaining Ground: A History of Landmaking in Boston provides an exciting history of the present map.

[…] That year [1860] the City Council decided to have a new 500-scale map of the city prepared by the city engineer's office. This map was then issued annually, with updates, from 1861 to 1868 (except in 1865) under the name of the city engineer - James Slade (1861 - 1863) titled, for example, Plan of Boston, Corrected under the direction of…Committee on Printing, James Slade, City Engineer [1862] and N. Henry Crafts (1864 - 1868) titled, for example, Plan of Boston, with Additions and Corrections made by N. Henry Crafts, City Engineer 1868. In 1868, the map was enlarged to include Roxbury, which had been annexed to the city that year. In 1869, responsibility for the map shifted to the office of the city surveyor, Thomas W. Davis, and the map was published under Davis's name that year and in 1870, when as Plan of Boston, with Additions and Corrections made under direction of Thomas W. Davis, City Surveyor, it was enlarged again to accommodate the annexation of Dorchester. With its large scale, annual updates, and inclusion, after 1863, of the variation of the Chesbrough 1630 shoreline, the city engineer's/surveyor's map is generally an accurate source of for a study of landmaking.

Seashoales then goes on to state that, after 1870, the city stopped publishing its Plan of Boston because both the lithographic stone and original the engraved copper plate were destroyed in the Great Fire. It was not until 1880, when two young men in the city surveyor's office, Irwin C. Cromack and George F. Loring, formed the Boston Map Company that a new, updated plan of Boston was published.

This map was created in the City Engineer's office under the direction of Nathaniel Henry Crafts, drawn by Henry Morse Wightman, engraved by C.A. Swett, lithographed by Augustus Meisel, and published in 1867 as the second to last in a series of city plans published by the city surveyor's office. We note eight examples cataloged in OCLC which are part of the collections at the New York Public Library, Princeton University, Harvard University, the Boston Athenaeum, the Phillips Library at the Peabody Essex Museum, Dartmouth College, the University of Chicago, and Brigham Young University.

Nathaniel Henry Crafts (March 15, 1828 - June 14, 1908) served as the City Engineer of Boston from 1864 through 1872. Born in Watertown, Massachusetts, Crafts worked for his brother Joseph in the wool pulling trade from the age of sixteen for about five years until leaving to join the offices of the chief engineer of the eastern division of the Boston Water Works, William S. Whitwell, in June 1849. He worked for Whitwell until 1851, when he left to work in the office of the city engineer of Boston under E. S. Chesbrough. Chesbrough served as city engineer for four years and then Crafts worked for his successor, James Slade, until 1864. Crafts succeeded Slade as city engineer. The completion of the Chestnut Hill Reservoir ranked among the most important of the projects completed during Crafts' tenure as city engineer. After he resigned as city engineer in 1872, Crafts worked as a consultant for cities and towns throughout the northeastern United States. He married Emeline Broad on November 13, 1851, with whom he had at least two daughters. Learn More...


Henry Morse Wightman (January 5, 1840 - April 3, 1885) was an American civil engineer. Born in Cambridge, Massachusetts, Wightman graduated from the English high school in 1857. He joined the office of the city engineer as a 'rodman' soon after graduation and spent the rest of his life working in that office. He worked on the project to raise the waters of Lake Cochituate, the rebuilding of the Dover Street bridge, oversaw the construction of the Public Garden, and was the engineer for the Back Bay Commission. As such he completed surveys and plans for the filling and laying out of the whole Back Bay territory and surveyed the entire Stony Brook watershed. After the Back Bay project was completed, Wightman returned to the office of the city engineer and soon became the resident engineer in charge of the work at the Chestnut Hill Reservoir. In 1870, Wightman became the chief assistant to city engineer Nathaniel Henry Crafts and Joseph P. Davis. When Davis retired in 1880, the city council named Wightman city engineer, a position he held until his death of double pneumonia. Learn More...


Augustus Meisel (December 12, 1824 - January 24, 1885) was a German-American lithographer active in Boston during the mid-19th century. Born in Baden, Germany, Meisel immigrated to the United States United States with his brother Berthold (December 10, 1831 - April 5, 1915). The pair arrived in New Orleans on December 5, 1848. Augustus became a naturalized American citizen on September 3, 1855, with Berthold receiving his citizenship a little over a month later. The brothers worked together as lithographers in Boston until Augustus's death. He died January 24, 1885 of pneumonia. Learn More...