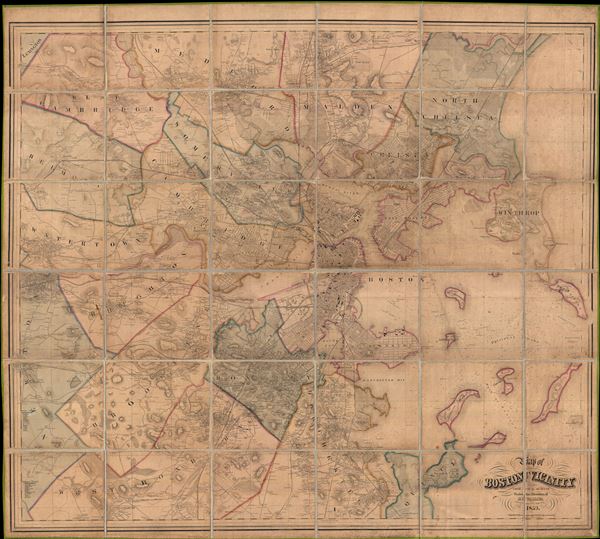 An expansive 1859 dissected case map of Boston, Massachusetts and its immediate vicinity compiled by Henry F. Walling. This enormous production is one of the large and most detailed maps of Boston to appear in the 19th century. Centered on Boston proper, Walling's map covers from Lexington to Quincy and from Newton to North Chelsea. The map identifies streets, offers footprints of important buildings, the names of significant householders, and notes public buildings, rail lines, various businesses and utilities, shipping routes, parks, and topography, as well as nautical details in Boston Harbor. Many of the buildings of Harvard College are specifically identified. The Back Bay Reclamation project, which had been planned form about 1855 on, was still in progress when Walling issued this map. In fact, work had begun only two years earlier in 1857. The project itself was not completed until 1882, however Walling here overlays the existing marshland with ghosted streets and parks.

Acting in his official capacity as Head of the State Survey, Walling's production of this map is the result, as the map itself states, of 'actual surveys' commissioned and supervised by Walling himself. Facing fierce competition from other publishers that merely copied and amended earlier maps, Walling was committed to producing a first rate modern map of both commercial and governmental viability. Walling's Boston and its Vicinity was first issued in 1857 in a slightly smaller format, with a subsequent minimally updated in a more common edition in appearing 1858. The present edition, 1859, is the third state, a physically larger map, and the only to include significant updates, among them greater westward coverage to account for urban expansion into the suburbs. There are only three known editions, this thus being the third. All examples are extremely scarce and rarely seen on the market.

Good. Some toning and restoration. Folds into custom made binder.