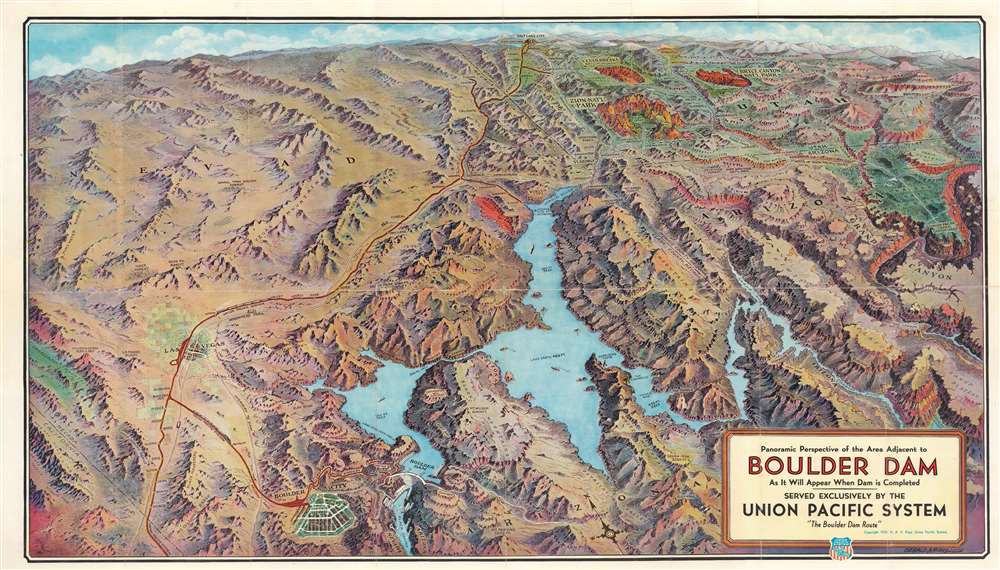 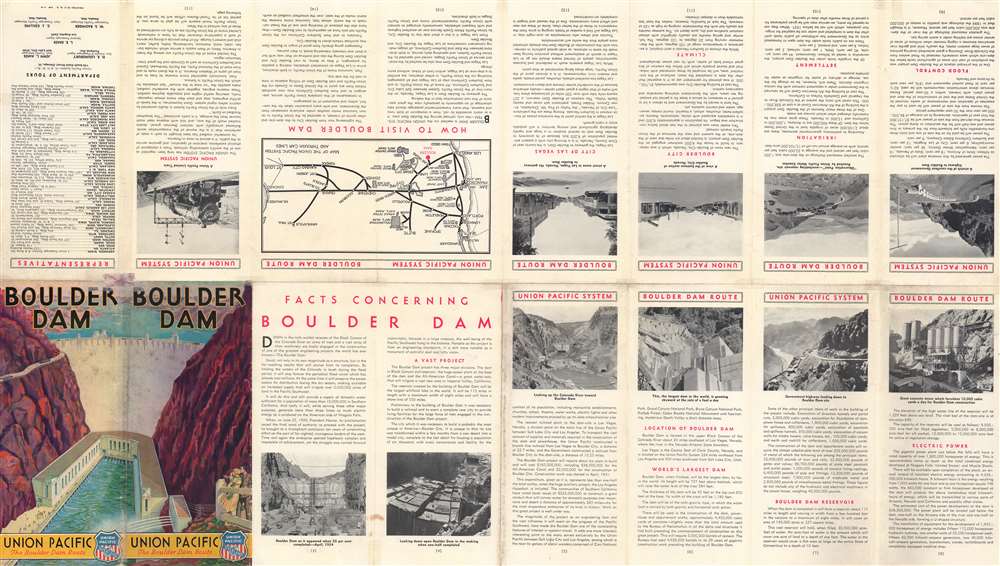 This is a 1934 Gerald A. Eddy bird's-eye view perspective map of Hoover (Boulder) Dam, Lake Mead, and environs at the height of its construction. Hoover (Boulder) Dam appears in the lower-left next to Boulder City, explicitly founded to house the thousands of workers involved in construction. Lake Mead dominates the foreground, and the view stretches hundreds of miles north to Salt Lake City, Utah. This was published as a promotional piece for Union Pacific Railroad, and thus a red line traces the railroad's route south from Salt Lake City to Las Vegas and on to Boulder City and the construction site. The Grand Canyon, Zion National Park, Bryce Canyon National Park, and Cedar Breaks National Monument are highlighted, no doubt in the hopes of driving tourism despite the Great Depressing. The region's mountain ranges, canyons, and other natural wonders are also identified.

Hoover Dam, built on the Nevada-Arizona border, is a concrete arch-gravity dam in Black Canyon on the Colorado River. It was built between 1931 and 1936 and thousands of people. Over 3,000 individuals were on the payroll when construction began, and the workforce hit its peak in July 1934, with 5,251 people on site. Over one hundred people died during construction. Hoover Dam forms Lake Mead, the largest reservoir in the United States. The dam generates electricity for millions of people in Nevada, Arizona, and California.

When people began lobbying for the dam's construction in 1928, the press referred to it as the 'Boulder Dam' or the 'Boulder Canyon Dam,' even though the proposed site was in Black Canyon. On September 17, 1930, Secretary of the Interior Ray Wilbur spoke at the ceremony celebrating the beginning of the construction of the railway between the dam site and Las Vegas. During his speech, Wilbur referred to the dam as 'Hoover Dam' and cited a tradition of naming dams after presidents (never mind that one had never been named after a sitting president). After Hoover lost his reelection bid in 1932, the new Secretary of the Interior, Harold L. Ickes, began vehemently campaigning against the name Hoover Dam. He would only refer to it as Boulder Dam, even going so far as to state, incorrectly, that Congress had never formally used that name. The naming controversy continued, with average Americans using the names interchangeably until 1947, when Congress sanctioned 'Hoover Dam'. Intriguingly, this naming controversy extends to the present map, with an earlier state (Geog: hooverdambirdseye-eddy-1931), issued in 1931, using the name Hoover Dam instead of Boulder Dam, as here.

This map was drawn by Gerald A. Eddy and published by R. B. Robertson for the Union Pacific system in 1934. An earlier 1931 edition, bears the name 'Hoover Dam'. The present 1934 edition is rarer than the 1931 edition, as the 1934 edition is not cataloged in OCLC and appears infrequently on the market.

Gerald Allen Eddy (October 12, 1889 - September 9, 1967) was an American artist. Born in Michigan, Eddy's parents either divorced or his father died between 1900 and 1910. In 1910 Eddy was living with his mother, brother, and stepfather in Los Angeles and working as an artist. Eddy was a prolific cartographer and created numerous maps of different areas of the western United States. He was married and had a daughter by 1917, according to his World War I draft card. He was married to his wife Madolyn when he died. Learn More...

Good. Wear along original fold lines. Verso repairs to fold separations and at fold intersections. Small area of infill at a fold intersection. Text on verso.
Looking for a high-resolution scan of this?