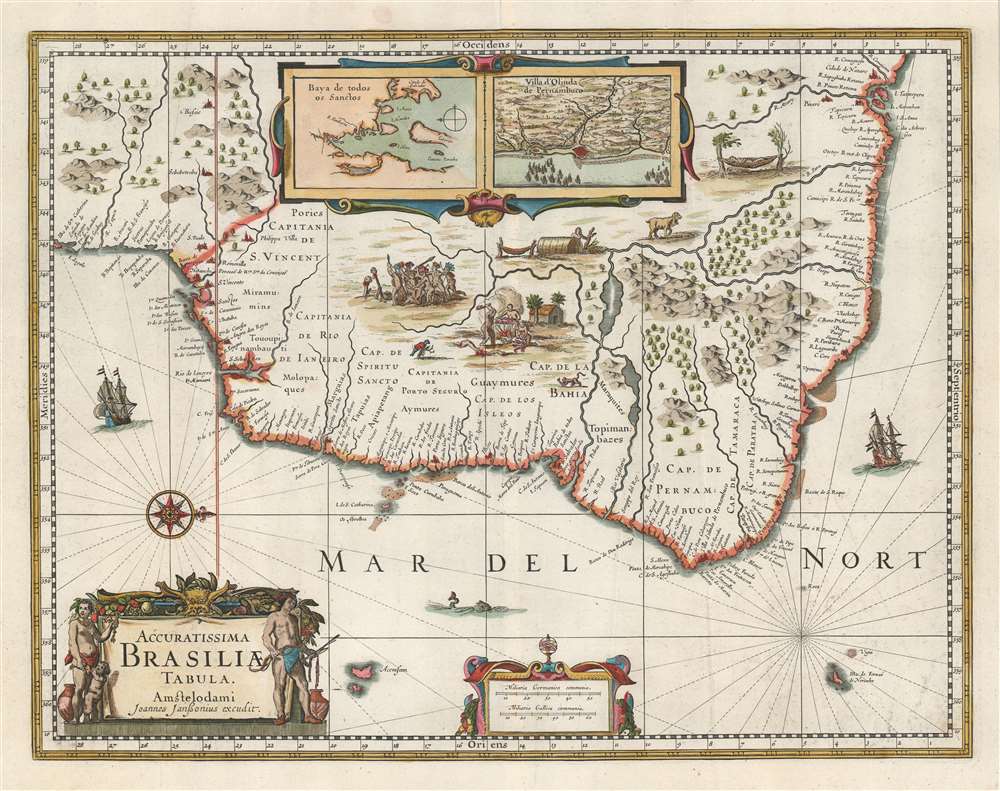 Portuguese War and Dutch hegemony in Brazil. The map emerged from a short lived Dutch effort spearheaded by the Dutch West India Company (WIC), to take over Brazil and the Portuguese sugar trade. Oriented to the west, as one would approach Brazilian coasts from the sea, the map covers Sao Paulo in the south to Cidade de Nazare and São Luís in the north. The exterior is dotted with cities, ports and large navigable rivers, lending an aura of prosperity to the region. The interior, by contrast, exhibits grizzly vignette scenes of cannibalism, beheading, and tribal warfare, along with a few exotic animals. Inset maps at top center detail 'Baya de Todos os Sanctos' and 'Villa d'Olinda de Pernambuco,' both then under Dutch governance.

The Dutch-Portuguese War and the Sugar Trade

Between 1602 and 1663 Dutch corporate interests fought a series of wars with Portuguese Colonies in the Americas in an attempt to wrest global trade from the entrenched Portuguese. After the VOC achieved some success in the East Indies, they turned their attention to the Americas, founding the Dutch West India Company (Geoctroyeerde Westindische Compagnie, or WIC) in 1621. The Sugar Trade was then the world's most profitable business and was dominated by English, Spanish and Portuguese colonies in Brazil and the West Indies. The WIC invaded the capital of Brazil, São Salvador de Bahia de Todos os Santos, in 1624, but were driven out in 1625, less than a year later. In February of 1630, a second attempt was made with Commander Hendrick Corneliszoon Loncq landing a WIC fleet of 67 ships at Pernambuco. By February 16,1630, the Dutch were in possession of Olinda; by March all Portuguese resistance was over and the Dutch were masters of Recife, Olinda, and the island of Antonio Vaz. They renamed this part of Brazil 'New Holland,' and in 1651 expanded their hold on the region with the capture of São Luís. They conquest would be short lived. The Dutch proved much harder masters than the Portuguese leading to the 1645 Pernambucan Insurrection led by the mulatto land-owner João Fernandes Vieira, who proclaimed himself a Portuguese loyalist. Unable to maintain broad control of their Brazilian conquests against grassroots revolt, the WIC was fully expelled from Brazil in 1654. Ironically, it was preoccupation with the sugar plantations in Brazil that prevented the Dutch from holding onto their other major new world colony, then a backward fur trading outpost on a small island off the coast of North America - New Amsterdam, or as it became in 1664, New York.

This map was originally engraved by Henricus Hondius (1597 - 1651) around 1633. The Hondius plates were later taken over by Jan Jansson (1588 - 1664), c. 1644, who retooled them and added his own imprint. Visscher later took over the plates and continued to publish the map largely unchanged. The map enjoyed a long subsequent print run with some editions appearing in atlases as late as the 1690s.