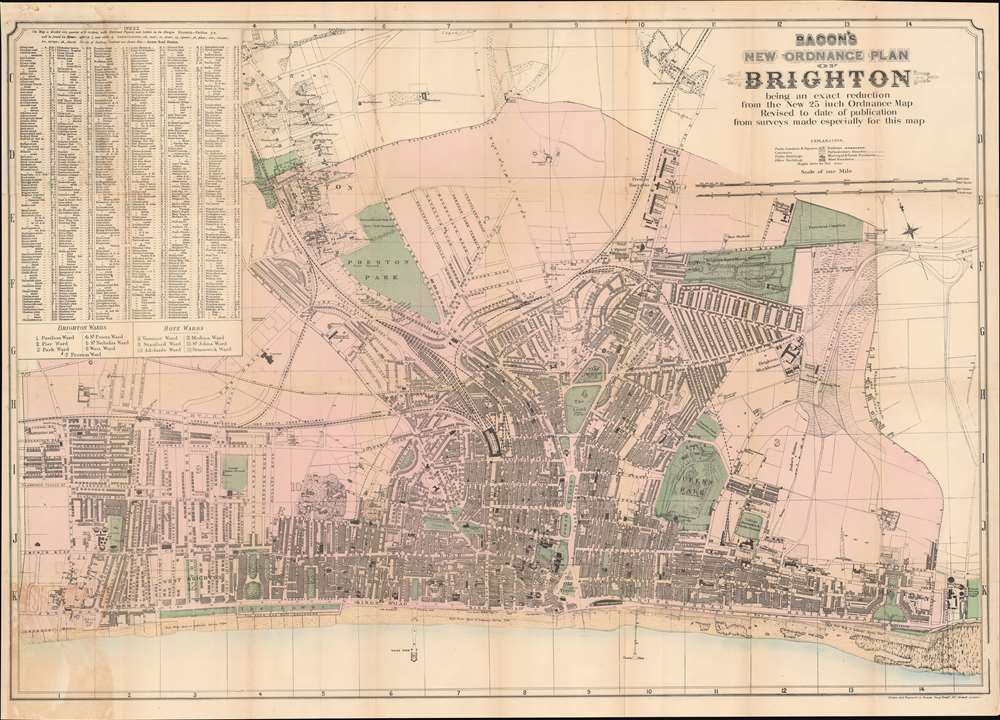 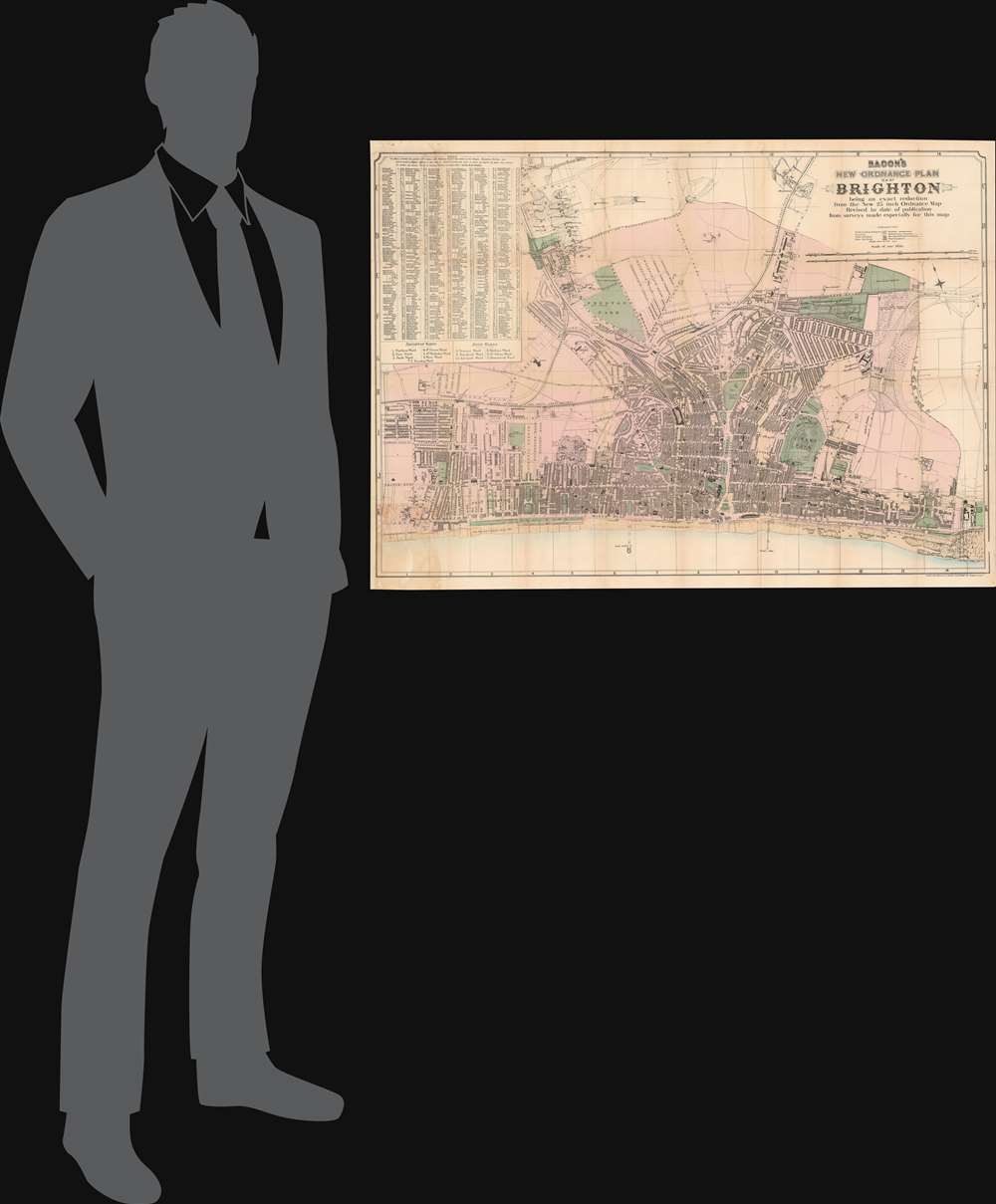 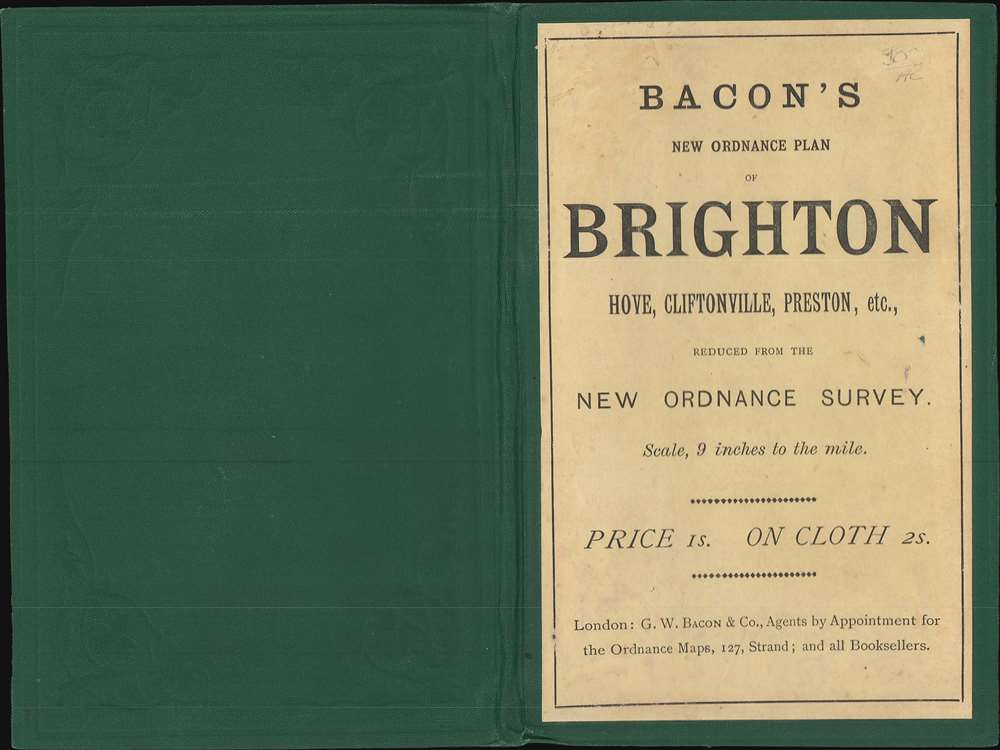 This is George Bacon's c. 1890 city plan or map of Brighton, England, at the height of its 19th century tourism boom. Coverage extends from Hove Drove (A2023) in the West to Riflebut Road (Marina Way) in the East and North as far as Hollingbury Castle (just South of the A27). The map notes streets, parks, civic buildings, and churches. Brighton's famous beach stretches along the bottom, with the pleasure pier (West) and the industrial pier (Chain) noted. There is a comprehensive index in the upper left. Today, as when this map was published, Brighton remains popular with British tourists.

The Piers of Brighton

The map notes two piers: Chain Pier and West Pier. Chain Pier, better known as Royal Suspension Chain Pier, was construed in 1823 as a landing stage for packet steamers from Dieppe. The Chain Pier was damaged in a storm in 1896 and its remains were dismantled in 1899 to construct the now-famous Palace Pier, home to fairground rides, bars, restaurants, and deckchairs. West Pier, today in ruins, was Brighton's first pleasure pier, built during the boom in Brighton tourism in the 1860s. It was designed by architect Eugenius Birch as a place for seaside visitors to enjoy fresh sea air. It reached a peak in popularity in the early 20th century, but use declined after World War II. Today only an iron skeleton remains.

This map was published in London by George Bacon's Geographical Establishment. Editions were issued from the 1870s, with minor updates and variations. Although the present example is undated, the presence of the piers narrows the publication date of the present example to the early 1890s. We note examples in the British Library and Bibliothèque nationale de France. It is otherwise remarkably scarce, with no examples on the market.

Very good. Some discoloration where previously attached to binder. Minor verso reinforcement along some fold lines.