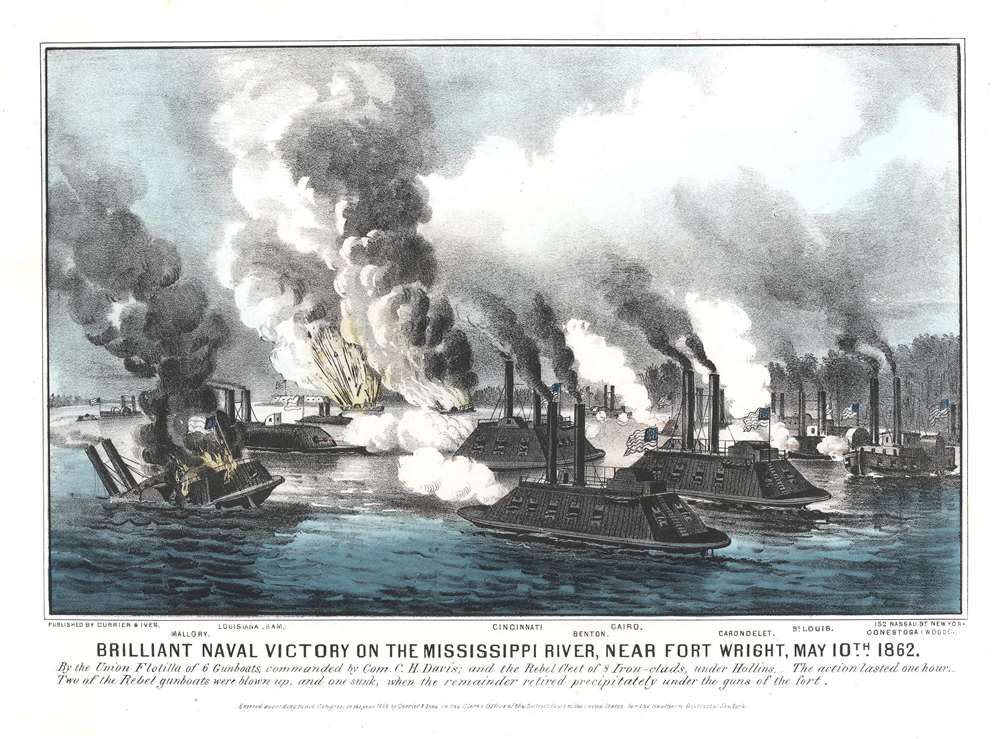 A rare civil war naval combat scene. This is an 1862 Currier and Ives view of the American Civil War naval battle of Plum Point Bend (also known as Battle of Fort Pillow), fought on the Mississippi River in Tennessee. The view illustrates the close quarters fighting between Confederate and Federal ironclads. The Federal ironclads Cincinnati, Cairo, Benton, St. Louis, and Carondelet occupy the foreground. Multiple vessels are sinking or on fire such that chaos of battle is almost palpable.

The Battle of Plum Point Bend

Fought on May 10, 1862, the Confederate River Defense Fleet engaged the Federal Western Flotilla commanded by Flag Officer Andrew H. Foote (1806 - 1863). Foote planned a joint attack Fort Pillow with Flag Officer David G. Farragut's (1801 - 1870) Federal naval squadron. Fort Pillow was a massive 5-mile long Confederate Mississippi River fort defended by forty guns - one of the last and strongest Confederate forts on this part of the Mississippi. The Confederates learned of Foote's presence north of Fort Pillow before Farragut arrived. Their commander, Captain James E. Montgomery (1814 - 1871), launched preemptive attack Foote's fleet before it could be reinforced by Farragut. Fighting lasted all of one hour, but the damage was done. Montgomery sunk two Federal ironclads and a mortar boat. But, because the Federal fleet disabled four of the eight Confederate ships, and the Confederate fleet withdrew to Fort Pillow, Union forces claimed victory.

This view was created and published by Currier and Ives in 1862. A solitary example is cataloged in OCLC as part of the collection at the Library of Congress. We have located one other cataloged example at the Huntington Library. Rare.