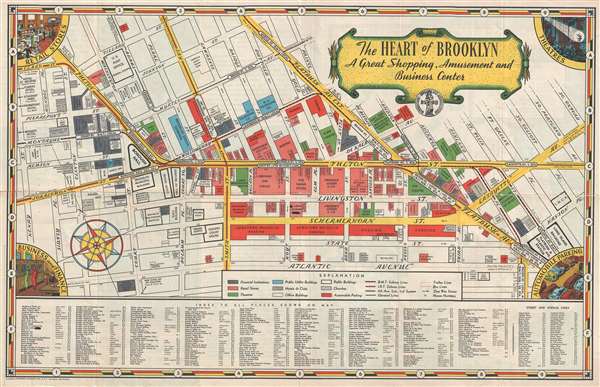 A nearly unknown but wonderful 1935 pictorial map of downtown Brooklyn published for the Downtown Brooklyn Association and prepared by the Hagstrom Company. The map was drawn to promote the shopping and nightlife in downtown Brooklyn, with particular attention to retail stores, theaters, business opportunities, with, let's not forget, easy access to plentiful parking. The map centers on the Fulton Street Mall and extends from henry Street to Oxford Street and from Tillary Street to Atlantic Avenue. Color coding identifies Financial Institutions, Retail Sores, theaters, public buildings, hotels and clubs, office buildings, churches, and of course, parking. At this time the New York City Subway System was run by several small companies and here the BMT, the IRT, and the Trolley lines are all noted. Important business are identified by name on the map, with smaller business being identifiable via a large index below the map proper. On the verso there is a general map of Brooklyn, as well as a historical overview of the region. The copyright for this map was granted to Hagstrom Company on January 3, 1935.

Very good. Some creasing and wear on original fold lines. A couple of minor verso reinforcements.
Looking for a high-resolution scan of this?