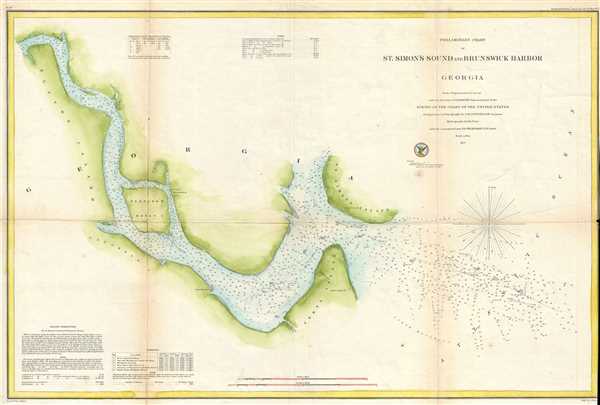 Both Saint Simon's Island and Jekyl Island are celebrated for their fantastic beaches.

This is an 1857 U.S. Coast Survey maritime map or nautical chart of Brunswick Harbor and St. Simon's Sound, Georgia. The map depicts from Blythe Island to St. Simon's Island and Jekyl Island. Buzzard's Roost Island and Colonel's Island also are illustrated. Depth soundings are given throughout Fancy Bluff Creek and Saint Simon's Sound. A tidal chart is provided along the top border and sailing directions and a table of currents are situated in the bottom left corner.

The whole was compiled under the supervision of A. D. Bache, one of the most influential Superintendents in the history of the Coast Survey. Published in the Report of the Superintendent of the United States Coast Survey in 1857.

Very good. Wear along original fold lines. Backed on archival tissue for stability. Blank on verso.
Looking for a high-resolution scan of this?