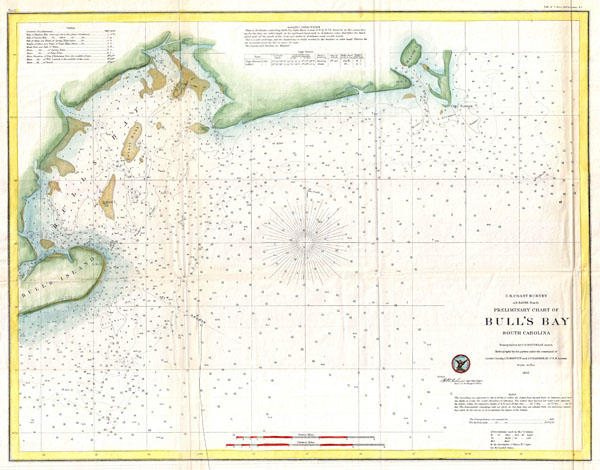 A very attractive example of the rare 1859 U.S. Coast Survey map or nautical chart of Bull's Bay South Carolina. Situated along the South Carolina coast just north of Charleston, Bull's Bay and Bull's Island are adjacent to the Francis Marion National Forest. Features countless depth soundings as well as notes on tides, shoals, breakers, and other undersea dangers. Sailing directions appear at top center. The triangulation for this map was completed by C. O. Boutelle. The Hydrography was accomplished by a party under the command of J. N Maffitt and J. B. Bankhead. The whole was completed under the direction of A. D. Bache, one of the most influential and prolific Superintendents of the U.S. Coast Survey. Published in the 1859 edition of the Superintendent's Report to Congress.