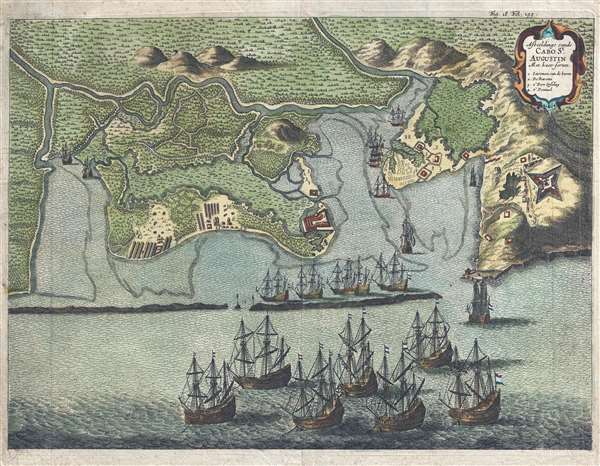 Stunning view of a battle between the Dutch and the Portuguese in Brazil!

This is a rare 1656 Jan Jansson and Isaac Commelin view of Cabo de Santo Agostinho, Brazil illustrating a battle between the Dutch and the Portuguese. The view depicts Cabo de Santo Agostihno from the east. Dutch ships have amassed at the entrance to the harbor and several Portuguese forts and encampments occupy sites the coast and on the high ground above the harbor. A decorative title cartouche in the upper right corner includes four locations which are numerically identified, including the entrance to the harbor and Fort Gyseling.

This view was created and published by Jan Jansson in Isaac Commelin's book Histoire de la vie et actes memorables de Frederic Henry de Nassau Prince d'Orange in 1656. Today this map is quite scarce and there are few examples even in institutional collections.


Isaac Commelin (October 19, 1598 - January 13, 1676) was a Dutch historian. Born in Amsterdam, he wrote basic works in the fields of geography, cosmography and astronomy, discovery, and travel, along with the works Lives of the Stadtholders William I and Maurice and Origin and Progress of the Dutch East India Company. Learn More...